In a previous post, I alluded to some unwelcome household guests.  The good news is that they're gone.  The bad news?  It took significantly longer than it was supposed to, right in the middle of an incredibly hectic and stressful week.  A week later, I am able to look back on it without my heart rate going through the roof.  And so here's the story, along with some lion cat photos.

The plan was simple.  I would pack all of my belongings into plastic bags and then boxes.  They would be removed and put into a locked vehicle in full sun for a full day, enough to kill any lingering bugs after washing and drying fabrics at high heats.  Meanwhile, the offending soft furniture would be removed, the apartment fumigated, and, several hours later, the new furniture and all my belongings brought in.  I arranged to take the cats to the vets for a day of grooming.  I rearranged my schedule to be at home for the morning and evening moving times.  I did all the packing.

And everything went smoothly at first.  Cats to groomer, check.  Belongings moved into truck, check.  Icky furniture removed, check.  And then we found out that the four hour fumigation treatment would actually be forty-eight hours.  Cue nervous breakdown.  No place to sleep.  No suitcase of belongings for two days (everything spread out across boxes).  No provisions for the cats.  And, worst of all, no time to do laundry and pack for my trip home just a few hours after being allowed to move back home.  Deep breath in, deep breath out.

I could write a long post on the 48 hours of drama, but the short story is that everything worked out.  Funds were mysteriously found to pay for two nights in a hotel after I started making faces at the suggestion I sleep on the gurney in the med unit.  Several boxes were delivered to my office so I could cobble together a few outfits and necessities for the hotel stay.  The vet agreed to board the cats, but only after I made a trip there to pay a 2000 riyal deposit ($533), even though the final bill would be a whopping 150 riyals ($40).  My colleagues were, as always, helpful and accommodating.  And I was able to move back in at the scheduled time on Tuesday (imagine that!), after picking up the newly groomed cats.  And the warehouse guys did an impeccable and quick job of moving my stuff back in.  I managed to get the laundry done and pack my bags, as well as unpack most of my belongings.  And let me tell you, my new bed is soooo much better.  Before I had a king-sized bed.  Which sounds nice.  Except the mattress was equivalently comfortable to a toddler bed mattress (complete with crinkly plasticky covering).  And had no box spring, just resting on a wooden platform.  So now I have a relatively comfortable queen mattress and box spring with a decent headboard.  Best of all, I can use my own linens.  Which should hopefully arrive when I get back to Saudi in a few weeks.

The new couch and arm chairs and worlds better than my old couches.  These new ones are just FS-standard Drexel couches, but they are at least comfortable and better-looking than my brown burlap monstrosities.  Now I just need to get rid of the drapes.  Yellow, really?

But what really kept me laughing and in good spirits all day Tuesday was Griffin.  I'd asked the groomer to just trim his long hair.  This was interpreted as "give him a lion cut."  Don't get me wrong, I think the lion cut is hilarious.  But that's the problem.  I can't stop laughing at cats with it.  Which can be scarring.  Griffin is very proud of himself and is soft.  But he's hysterically funny to look at.  See photos below.  I started using Picasa and am experimenting with photo collages.  The one below contains a few pre-grooming cat photos, pics of my moving chaos (along with glimpses of the ugly brown couches), and after pics of the furniture and cats. 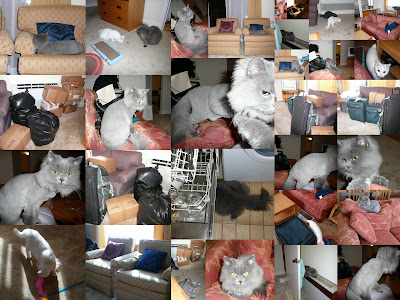