In case you're living under a rock and didn't notice, October is breast cancer awareness month.  Those of us who (usually) live in the U.S. know of some of the amazing campaigns to raise awareness and funds to fight this disease.  In the past few years, pink has come to be so much more than a color.  I didn't expect that to be the case as much in Saudi Arabia.  Boy did I underestimate the women here!

(This month, a member of the Foreign Service family was diagnosed with breast cancer.  She's a prominent blogger and active member of the community, and, while I don't personally know her, my heart goes out to her and her family.  Another reminder that nobody is immune.)

Several weeks ago I started to get wind of a big event to be held in Jeddah in honor of breast cancer awareness month.  The basic idea behind the event was to assemble enough women to form the world's largest human awareness ribbon.  (Apparently, a group in Germany currently holds the record with more than 3,500 participants for an AIDS ribbon a few years ago.)  The organizers originally set the bar low and said they were hoping for 2,000 participants (less than the record).

I started getting daily emails about the event, saw numerous news articles about it, picked up flyers in stores, and heard about it from dozens of people.  So of course I decided to go.  I organized a group of colleagues and friends to join me, and everywhere I've gone for the last few weeks people have said they'd be there too.

Between Facebook, word of mouth, and an extensive marketing campaign, the event was the talk of the town.  Other organizations joined in too.  Universities held lectures for the public on breast cancer information, hospitals sponsored free screenings and discounts on mammograms, and pink merchandise sprang up in stores.  This being my first October in the Kingdom, I don't know if this is normal.  But it's certainly impressive.

The event is for women only and to be held in the Ministry of Education's stadium.  The sponsors, Avon Beauty Arabia and a local breast cancer awareness foundation, would distribute pink headscarves for the picture.  Other than time, date, and place, that was all the information available.  So none of us knew what to expect going into today...

This afternoon started with a community day at the American school, complete with a USG vs school faculty softball game, a budding tradition.  The school won.  Easily.  But it was a fun afternoon with a great barbecue and lots of merriment.  Three buses full of women left from there to go to the breast cancer event.  I went with three colleagues, with the intention of meeting the rest there.

As soon as we got close to the stadium, the traffic was intense.  Women of course can't drive, so every woman there had to be brought by a man, an interesting phenomenon on its own.  We had been encouraged to wear pink (under the abaya for most, which could come off once inside), and all of us dutifully did so!

Now I have to give some credit to the organizers for their attempts at organization.  They booked the stadium, got the word out, had enough headscarves, and made the VERY smart move of drawing a ribbon outline on the field.  However, I'm convinced they underestimated the turnout.  And since all the local police and security agencies are male, it was all volunteers with little crowd management experience.  We immediately got into a frighteningly tight crowd, everyone clamoring to get inside.  I figured out from muffled megaphone announcements that we had to register and get tickets at one table (despite having pre-registered), so I made my way in to do that for my group.  After catching back up with them, the crowd started surging to the left again, this time to pick up the pink scarves.  Again, knowing it was easier for one to maneuver than four, I tried to get to the table.  I have honestly never been quite that crushed in a crowd.  It started to get a little claustrophobic and frightening.  I made it to the table, where the overwhelmed volunteers were working as hard as they could.  I waited my turn (though I'm pretty sure I'm the only one who did), grabbed the swag, and made it back to my group.  We were then able to enter the stadium area, where the crowd thinned out and dispersed.  We found the rest of our colleagues and tried to figure out our next move.

The other major problem with the organization was the lack of communication.  We followed the crowd into the stadium seating, where thousands were already gathered.  When we sat down and regrouped, though, we realized there was no access to the field from there.  The few people we asked had no idea what was going to happen or when.  There were all kinds of rumors going around, and even the organizers seemed hazy on the details.  We sat for about 40 minutes, posed for some pictures with a couple of media outlets, and marveled at the crowd.  One of the rumors was that over 7,000 women had pre-registered, which meant the turnout could be even higher.  I believe it, looking at that crowd.

We finally figured out that there in fact was no field access, so we made our way to the other side where a very small sign indicated 'ribbon entrance.'  The volunteers at the gate told us it would be another hour until things got started.  So we took a seat on the nearby curb and camped out.  As we sat there and waited and marveled, the crowds kept getting bigger and bigger.  After another 30 minutes the volunteers were called to the field.  I think the VIPs (including a couple royals) must have entered too, but it was hard to tell since there was no communication and seemingly mass chaos.  We finally went over and asked again and were told that everyone would be entering the field in clumps of 50, so that the Guinness Records people could count and record the participants.  7,000+ women, 50 at a time, every group taking 10+ minutes.  You do the math.  We'd already been there 2+ hours, and it would be hours before we even got inside.  The place was a sea of pink and black.  Even though it was just women, most people kept their abayas on.  I have no idea how they did it.  I didn't even bring mine with me (I seldom wear it these days, anyway).  But almost everyone put their new pink scarves on.  Most over their black scarves and abayas.

Sitting there and watching the crowd, my colleagues mostly came to the same conclusion:  it was time to leave.  I originally decided to stay, with another woman, to participate in the actual ribbon.  But as we waited for the car and I started processing the sheer number of people (7,000+)  vs the number of exits (1) vs the number of security personnel (0), I changed my mind.  I felt guilty about leaving, so I asked my colleague, a security officer, to tell me that it was a security risk to stay.  Which it was.  So she did, laughing at me all the while.  The chances of stampede, a crush injury, and/or a major traffic accident as everyone left at the same time was pretty high.  So I left with the group.  A few people stayed.  They texted me two hours later to say they'd made it onto the field.  Not to say the ribbon was assembled, just that they'd made it in.  I made a good decision.

Leaving early was difficult enough.  We snuck out an emergency exit so as not to battle the crowd again.  The guys manning the door from the other side weren't too pleased, but we pushed through anyway.  I do have to give them kudos for having an ambulance and emergency medical personnel there.  And health professionals had handed out flyers on staying hydrated, crowd control, and maintaining a healthy temperature in the heat.  Amazingly, the heat wasn't a factor in our leaving.  The weather is indeed cooling slightly, and tonight, with a mild breeze, it was bearable.  (The internet tells me it's only 81 with 79% humidity right now, so four hours ago it must have only been a cool 90 degrees or so!)  Outside, hundreds of cars and men milled around (the drivers and husbands of all the women inside).  Quite an interesting contradiction to what we'd just left.

I'm sad I didn't officially take part in forming the world's largest human awareness ribbon.  I have little doubt they accomplished the task tonight.  But for safety reasons, it just didn't make sense to stay.  And as I walked up to my apartment, I ran into my neighbor, who told me she'd just come from the event as well.  I think a whole lot of people left on seeing the reality.  But I'm glad I went.  I wish the organizers had planned for the huge crowd, and I hope nobody got hurt tonight.  But it is such a great idea and a great cause, and the fact that women here are seemingly informed and proactive about breast cancer is awesome.  Lots of kudos to the sponsors and organizers.  There are some lessons to learn, but that doesn't take away from the effort and vision to put on such a massive interactive awareness campaign.  Way to go Jeddah!

(Here are a few photos from the very beginning.  As it got dark it was harder to take photos.  Please note that the stadium shots are from very early on in the night and are a mere fraction of the crowd.) 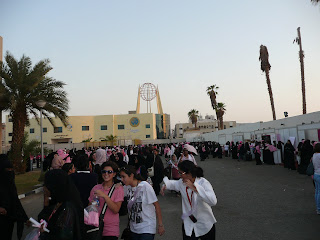 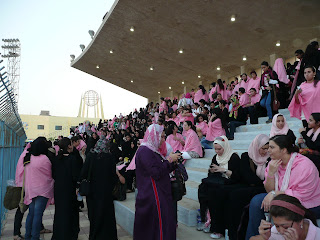 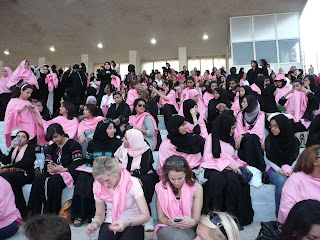 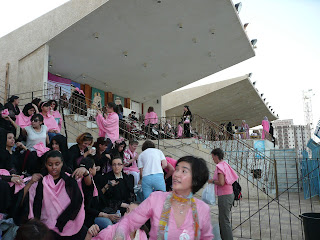