I woke up to bright sunshine and a slightly warmer morning than the past two days. I still stuck to socks and shoes this morning but am now happily back in sandals as I write this later in the day. Game was plentiful this morning, seeming to be happy to see the sun again but with lots of water and new grass to munch on. Our first sighting, after the impala on the lawn and a warthog digging in the mud, was a family of five elephants. That was our only up-close elephant encounter today, though we saw others from afar.

The first ninety minutes of the drive was quiet as we traversed riverine tracks to try and find some predators, finding plenty of birds and antelope but nothing to eat them. About 7:30 we were driving down the main road when Elias stopped and pointed. I saw impala and puku a few hundred meters in the distance, but he saw a leopard. So we picked up speed to get to the next cutoff into this area, an area where we'd previously seen most of our leopards and where we spent two hours last night trying to find them. As we neared the area where he'd pointed, the impala and puku were sounding warning cries and moving away, but there was nothing. Until I saw a rustle in a tree and then the leopard jumped down and ran off. We came closer, but it was determined to avoid us. I caught a couple snaps of her, but she ran and hid by a termite mound. As we drove back to her tree, we saw a fresh impala that she'd been munching on. She was popping her head up now and again to check on us, but she didn't come back.

We gave her some space and drove around looking for other leopards - her mom is Limping Mother, and she and another sibling live in this area. We circled back around the termite mound, but she wasn't there. Elias drove on, and then we both saw her at once. She was lying down in the open in a muddy area, very relaxed now. Elias told me this is where she was born and raised, and she's comfortable here. At the tree she'd been surrounded by yelling antelope and baboons and vervets so she hadn't wanted to tarry. But now she posed for us and let us admire her gorgeous spots. Another Sanctuary vehicle came up (from our sister camp), and she posed for them before flopping onto her back in a typical cat pose. Finally she tired of this and walked away. But what a lovely sighting!

Having had a great encounter with her, we drove on and continued to drive around the river bed, now with a significant flow of water, enjoying the happy animals basking in the sun. Newly-born pukus seemed to have appeared overnight, their births likely spurred on by the onset of rain. They were tiny, furry, curious, and a bit awkward still; it was great to watch. We drove around for another 40 minutes or so before heading back towards the leopard's area where the other driver told us he'd seen another kill. Sure enough, there it was, in a thicket. This was no ordinary impala kill - this was an aardvark! Or at least 2/3 of an aardvark; the head and one claw were missing. But it was intact enough to see the claws and tail and odd-looking skin. It may seem morbid to delight in this, but aardvarks are not commonly seen, and I was fascinated by its unique features.

We headed toward the river, stopping to stretch our legs at a spot where hippos and crocs were sunning themselves and hundreds of Southern Carmine's bee eaters were hunting and hovering and feeding their chicks in their riverbank nests. It was quite a sight to see and hear the swarms of these gorgeous red and blue birds; I've seen a lot of them on this trip but never so close and so many. They usually don't pose for photos, but I think I got a few nice ones.

The last hour was a chance to explore some areas that we hadn't seen since earlier in the week, now that the roads are drying up a bit more. We found a tiny baby zebra with its mother, probably only a couple days old. It was definitely still getting the hang of using its legs, and it was a ruddy brown color and very fuzzy. These are the endemic Crayshay's zebras, a subspecies of the common Burchells' zebra.

And then it was back to the lodge for lunch and a nap. I can't wait to see what's in store this afternoon! 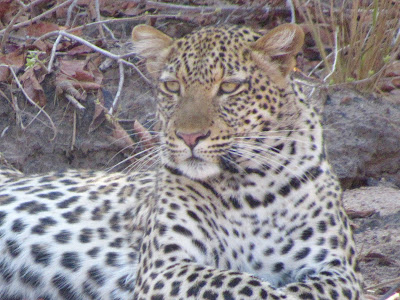 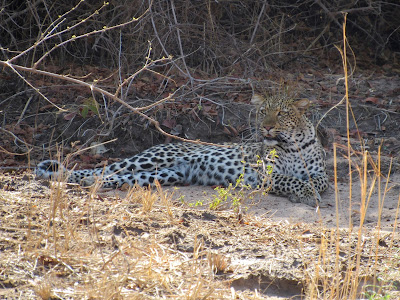 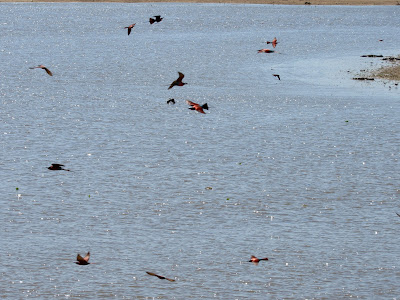 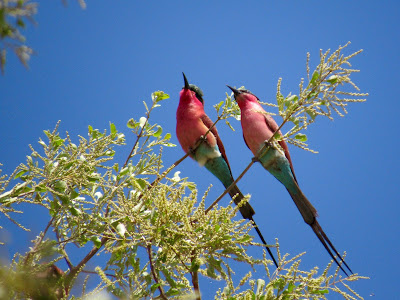 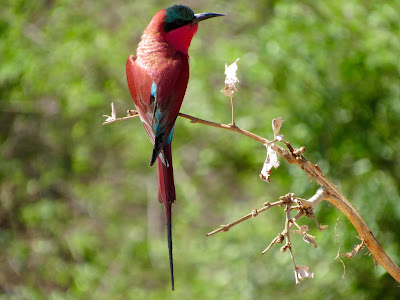 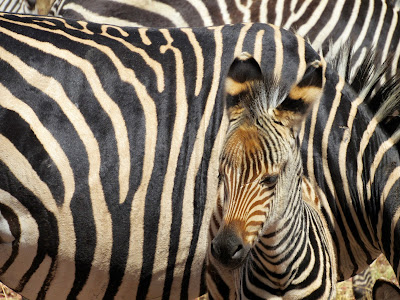