Another R&R, another Lyle Lovett concert. I love this tradition. This was my eighth concert in my 5.5th state (not sure how to count DC). As soon as Lyle announced his summer concert dates I looked for a good prospect (or two). I would just miss the lovely outdoor venue in Lowell, MA, and my brother's wedding and the preceding week of preparations meant I wouldn't have time to plan a flying trip somewhere. So Bridgeport, CT it was! It was within driving distance and the perfect amount of time before the wedding. I offered to buy tickets for both of my parents, but only Mom took me up on it. (That turned out okay because Dad and I had our own adventure a couple of days later - more on that soon!)

On that Wednesday Mom left work early, and we hit the road about 2pm. We promised Dad we'd stay overnight if we were too tired to drive home, but it was only about a 3 1/2 hour drive away. Neither Mom nor I had ever been to Bridgeport, and I hadn't realized it was so close to NYC. We hit a little traffic around Hartford and switched to a less-traveled road, pulling into town about 5:45. We marveled at the gorgeous houses in a variety of architectural styles and enjoyed the gorgeous parks and landscaping. At 6:00 exactly we reached the parking lot to the Klein theater, just as they were opening the gate. We were the first ones to park and chose a spot near lighting and the entrance of the venue, but we realized later the whole lot was well-lit and close to the venue.

We walked about two blocks to an area where I'd scoped out some restaurants on Google Maps and found ourselves in a nice little Chinese-Vietnamese restaurant. We were the first ones there for dinner, and we both ordered pho and some dumplings. I also introduced Mom to bubble tea - my favorite! The food was filling, and I ate tripe for the first time! (It was an accident; I thought it was a noodle. But it was pretty good!) We finished eating around 7:15 and headed back to the theater.

The Klein is a very nice theater - just the right size and with great acoustics. I had purchased tickets the first day they went on sale, but we still couldn't get center orchestra. We 'settled' for third row left orchestra. They were awesome seats!

The Large Band came on stage and started playing just after 8:00, starting with an instrumental as usual. Then the spotlights turned to the back of the theater, and we all turned around to see the one and only Francine Reed, microphone in hand, walk down the aisle to the stage. I had heard she was part of this tour and was thrilled to see her.

I adore Lyle Lovett in concert any time I see him, but the last few times I'd only seen him with his acoustic group, and there's nothing quite like seeing him with the whole Large Band. There were lots of familiar faces; it never fails to amaze me that some of these guys have been playing and touring with Lyle since the 1970s. And even the newer members fit in so seamlessly. It really speaks to the camaraderie and talent of this group of musicians.

The concert lasted almost three hours and was absolutely spectacular. Just the right mix of songs from across his repertoire and a couple sneak previews of new work by Keith Sewell and Luke Bulla. Absolutely fabulous. There were a lot of fans in the audience, but I think there were also lots of people not familiar with the songs too. It was a nice mix, and the audience was - as always - interactive and appreciative.

We left the theater, bought some merchandise, and headed to the car. We waited a few minutes to let the parking clear out before getting in the car, but it took less than ten minutes for us to get out, which is pretty good for a concert of that size.

The drive home wasn't really a fun one given the amount of night construction going on. Mom drove until Springfield, MA; we stopped at a McDonald's drive through to get soft serve and switch drivers, but it took 25 minutes from ordering to getting our cones. The guy in front of us was clearly ordering for an entire work crew, and they hadn't been ready for him. I took over driving and quickly realized that midnight after a long day was probably not the best time to drive Mom's car for the first time. Luckily that stretch of I-91 is a very familiar one, and we made it home without incident, pulling in at 3:00am. It was completely worth it! I can't wait for the next concert in a new state. Or even a state I've seen him in before. It doesn't matter. I'm a devoted fan. 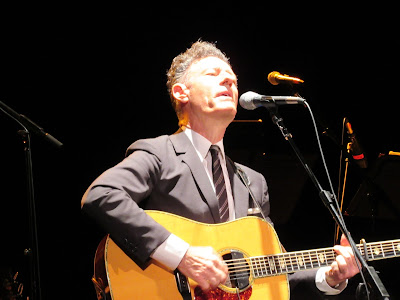