Wednesday morning didn't start off well. My room phone rang in the middle of the night; I didn't answer on the first call hoping it was a mistake, but they rang back. I answered, and they told me my driver was downstairs for my 1:45 pickup. It was 3am. I told them that my pickup was actually 1:45pm and grumpily went back to bed. But then I couldn't fall asleep wondering if the pickup would come back or whether I'd need to arrange something else. I finally fell back asleep, but the damage was done. I should also say that this bed was hard as a rock and was causing my hip to hurt, so sleep was already not going well.

The hotel had agreed to a late checkout, so I went downstairs at 1:30 to check out and see whether the transfer arrived. My bill had the breakfasts not included, which was frustrating, but they immediately took care of it and adjusted the bill. The transfer showed up at 1:40, and I breathed a sigh of relief.

The ride to the airport, where I'd meet my transfer to Rabat, was relatively easy, though I was dismayed to see that on one stretch of road before the highway dozens of Syrian men, women, and children were soliciting food and money. The reach of this crisis is global, and heartbreaking, and I was sad to see that even in Morocco the beleaguered refugees were reduced to begging. They held up laminated signs in Arabic and French identifying themselves as Syrian and held up their passports. A few cars rolled down their windows to give coins, but it didn't seem particularly lucrative.

My Rabat transfer was late; I was supposed to meet them at 3:00, but they didn't arrive until almost 3:30, and we finally left at 4:15 after six other tour group members arrived on a flight from Paris. The trip was only two hours and offered some glimpses into Moroccan life and plenty of interesting scenery, but I was ready to get settled. After a very quick check-in I met the rest of my tour companions at our orientation meeting. It's a very well-traveled group of 22, most of whom have gone with this tour company numerous times, which speaks well of the company. I went for dinner by myself but was quickly invited to join the group I'd rode from the airport with. We had a lively, delicious meal before I collapsed into bed for a blissfully restful sleep.

I met a few more people at breakfast on Friday before getting on our bus for the morning city tour. The small group and the big bus mean we'll all have plenty of personal space, which makes me very happy.  The bus is clean, well-appointed, and appears quite new. Our tour guide is extremely knowledgeable and kept up a running commentary as we took in the highlights of Rabat.

We started at the unfinished Hassan Tower, a Moorish design similar to two other minarets in Seville and Marrakesh. It was abandoned when its 12th century designer died and has never been completed. Right now it's covered in scaffolding to preserve what is there, so we couldn't see the detail. We also visited the Mohammed V mausoleum, a gorgeous building housing the tombs of the eponymous king and other royals. The guards at these sites are decked out in full ceremonial dress uniforms, and we got to witness the lackluster changing of the guards. Basically, four new guards walked up, shook hands with the ones standing post, and changed places. No pomp, no circumstance.

Next it was a visit to the royal palace, where we admired the luxurious grounds and buildings. The current king doesn't reside there, but it's still the seat of Cabinet, the Islamic Affairs Ministry, the defense administration (no ministry for this in Morocco), and the royal affairs administration. There's a school and a mosque open to the public, which was preparing for Friday prayers while we were there.

Next was Chellah, the ruins of the Roman city of Sala Colonia and first settled by the Phoenicians before the Romans took over. It started to drizzle while we were here, so I didn't take many pictures or pay as much attention to the narrative. Partly this was because of the rain and the slippery stones I had to pay attention to; partly this was because there were dozens of cats who needed attention. I was in good company with my fellow tour companions, many animal lovers among them. I should also mention that the area has been taken over by resident white storks, who make their giant nests atop the ruins.

Our last stop was the Kasbah les Oudaias, the original fortress and the oldest part of the city, now inhabited by expat artists and home to winding alleys and white washed buildings painted blue halfway up the walls, a legacy of the Moors who founded the area. We admired the many door knockers (hands of Fatima and scissors, both to ward against the evil eye) and the unique and decorative doors and decorations. We ended in the Andalucian gardens, filled with fruit trees and lovely foliage.

I like Rabat, which is a sleepier city than Casablanca, focused on government and administration and - at first glimpse - a bit more shiny/pristine than Casablanca's age, grime, and chaos.

The afternoon/evening was at leisure, and I think most people used the opportunity to rest and beat jet lag. I tried to catch up on some sleep and read some work emails (I know, but something big had come up) and ordered in delivery. I'm packed and ready for tomorrow's departure for Fez, with plenty to see along the way. 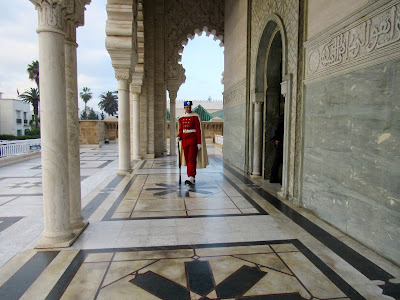 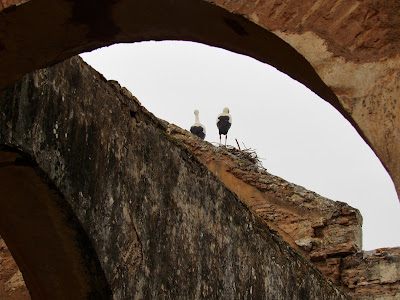 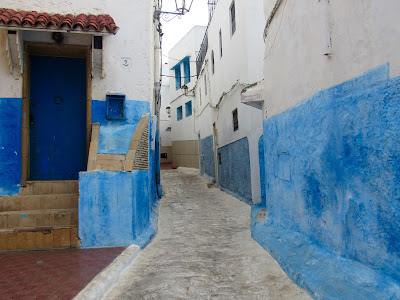 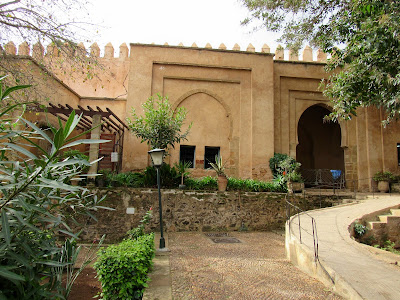