This winter/spring is a very busy time in our office as everybody takes their R&Rs and preps for a significant transition this summer (more than half our FSOs PCS this summer), so I decided to take advantage of a few days with everybody else in the office and fly to Belgrade. I've been wanting to visit ever since I learned there were direct flights from Beirut for pretty cheap prices. And while an ID renewal almost-kerfuffle made it so I missed out on the $225 tickets, $300 for tickets is still pretty great. The only catch is the timing: the flight from Beirut leaves at 4:00am, which pretty much ensures a night of no sleep. The return will be similarly brutal, arriving at 3:15am on a day I need to work.

I arrived into Belgrade on time at about 6:00am, sailed through immigration, picked up my bag, and met my transfer within 30 minutes of landing. There wasn't much traffic, so I was to the hotel by 6:50 and able to check in early. After a quick shower I caught another three hours of sleep before meeting my tour guide at noon. I debated whether to do a tour this afternoon, but I am so glad I did. The rain held off for 90% of our walking tour, and even then we broke up the heavier showers with a few taxi rides to different areas of the city. I had a really great afternoon and learned a phenomenal amount about Belgrade, Serbia, and the sights we visited. Plus, I got lots of ideas of places to return to (and photograph in sunnier weather) on the final days I'm here.

We started out in Republic Square (and its statue of Mihailo Obrenovic riding a horse) admiring the fascinating architecture on surrounding buildings and walked down Knez Mihajlova, a crowded pedestrian shopping and cafe street. This led us to Kalemegdan Park and then Kalemegdan Fortress, where we spent almost two hours exploring. The layers of history in Belgrade a bit overwhelming: Neolithic,  Celtic, Roman, Goth/Hun, Slav, Byzantine, Bulgarian, Serbian, Hungarian, Ottoman, Austro-Hungarian, Yugoslav, Serbian, with lots of back and forth between them and not necessarily in this order. And Kalemegdan Fortress showcases many of these layers, from the original Roman walls to the Austrian well to the medieval ramparts to more modern buildings. I won't even try to unpack it all here. But there was fascinating history in every corner as well as countless monuments to famous figures. To top it off, the views of the confluence of the Danube and Sava rivers are remarkable. Even with the gray gloom of the afternoon it was picturesque.

This was my first glimpse of the Danube in almost sixteen years. I spent summer after my freshman year in college teaching English in small villages in Hungary and Slovakia. Several weekends I met up in Budapest or elsewhere with friends in the same program, and many of those days and nights we spent traversing the Danube or ended up sitting on its banks, talking long into the night. So I associate the Danube with those carefree, endless summer days and nights.

We visited two of the churches in the fortress complex - one dedicated to the military and the other for Saint Petka.  The military church (Ružica Church) had phenomenal chandeliers made of repurposed bullets, swords, and other weaponry. I didn't get photos, but they were quite remarkable and attractive. Saint Petka's church is neo-Baroque with impressive mosaic frescos and a sacred spring. After some final meandering we exited the Kalemegdan park area and walked by the French and Austrian embassies before visiting St. Michael's Cathedral, just opposite the Orthodox Patriarchy and museum.

The rain started at this point, but we were ready to head across the river to Zemun. Part of 'New Belgrade', Zemun hosts a number of communist-era housing blocs that are familiar to any visitor to Eastern Europe, but the old town is marked by narrow, winding streets and smaller Austro-Hungarian style houses with red roofs. We started in Gardos at the Millennium Tower (1896) and then walked down several sets of winding stairways to the banks of the Danube. Part of the way we walked down with a man who made polite conversation with my guide. He said goodbye and turned into his home. Turns out it was a famed Serbian actor, Dragan Jovanovich!

We walked through the Zemun open green market and browsed a few cafes along the Danube before getting another taxi to go to Skadarlija for a late lunch. Near Republic Square, this cobblestone pedestrian street is lined with Serbian cuisine restaurants with names reminiscent of British pubs. It's also a bohemian area, home to many artists and writers over the years, similar to Montmartre. We chose Tri Sesira (Three Hats) largely due to the live traditional music accompaniment. I tried the tourist favorite Karađorđeva šnicla - rolled pork stuffed with cheese and breaded. It was delicious but heavy. It was also dinner. The rain intensified as we returned to my hotel, and I said goodbye to my fabulous guide. She was knowledgeable, had great English, and really tailored the sites to my interests. Over lunch we realized we're almost the same age and chatted about our families and childhoods. Absolutely lovely.

It's now 8:00pm and I need to get ready for tomorrow's trip to northern Serbia! 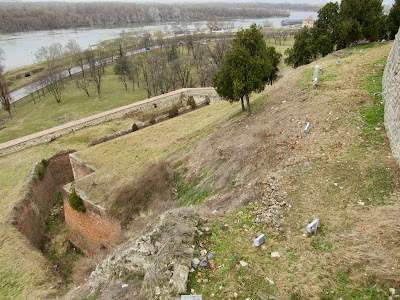 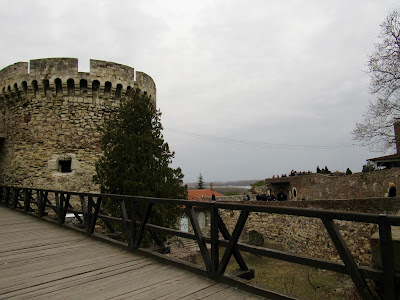 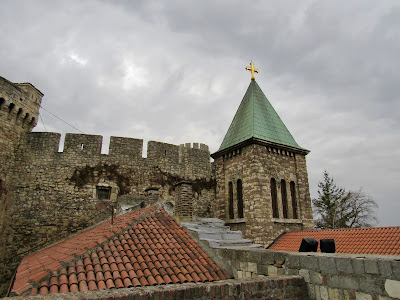 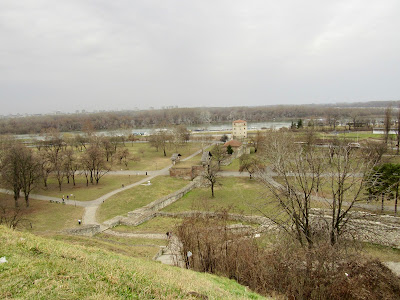 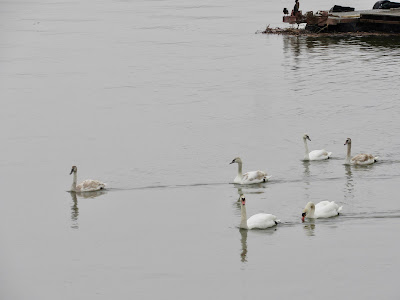 It's a lovely, cool August day in New Hampshire. I'm on home leave and loving the break from work and stress and alarm clocks. The cats are happy to be back here in my parents' house, and we're all enjoying catching up with friends and family.

The absence of posts is partly because my laptop died in April and I didn't get a new one until I got home in July. I could write on my iPad (though I didn't much), but I couldn't put up photos. So now I'm slowly working through thousands of photos from trips to Belgrade, Cyprus, Prague, and London as well as final adventures in Lebanon. More stories to come as well as a more newsy update. Lots has changed in the last few months, and there are some amazingly exciting adventures to come. We head to DC soon for extended training, and while I'm sad to leave home after a blissful summer, I'll be ready to reconnect with that lovely city and more great friends (and restaurants).

I hope you're all having wonderful summers wherever in the world this August finds you.
Posted by Sadie at 3:21 PM No comments: