This has been a horrific week for the U.S. diplomatic community.  In addition to the senseless murders of Ambassador Chris Stevens and Sean Smith, Glen Doherty, and Tyrone Woods in a possibly planned attack in Benghazi, our Embassies and Consulates and protecting powers have been engulfed by protests - some violent - in Egypt, Yemen, Libya, Iran, and possibly several other countries.  All over a movie.  There are no words to express the disappointment I feel that one individual's exercising of free speech in a country that expressly allows him to do so has spiraled out of control into rage and anger and violence against my colleagues who dedicate their lives in service to said country.  I in no way condone the content of the video (which I have not seen), and I stand firmly in favor of religious tolerance and embracing diversity without denigration or belittlement.  But I also agree with Secretary Clinton when she said "America’s commitment to religious tolerance goes back to the very beginning of our nation. But let me be clear – there is no justification for this, none. Violence like this is no way to honor religion or faith. And as long as there are those who would take innocent life in the name of God, the world will never know a true and lasting peace."  There is no justification.  None whatsoever.  I did not personally know any of these four men, but I'm only one degree of separation from them, and I grieve alongside my friends and colleagues and the victims' families and friends.  The image of their flag-draped coffins being loaded on board a military transport plane to come back home made me cry when I saw it tonight.

This moment of grief and solidarity among the Foreign Service community, though, has been thought provoking for me in several ways.  First, I am thankful to be where I am right now, surrounded by colleagues who all understand this on the same level as me - and for some who knew these fallen heroes, on even deeper levels.  Second, despite the stark reminder of the inherent dangers in my chosen profession, I am more certain than ever that I've chosen the correct path.  I am so proud to serve my country, the land of the free and the home of the brave.  The idealist in me wants to do more to explain American values of free speech and tolerance and inclusion to other people so as to prevent these types of travesties from happening ever again.  I am not naive enough to think we'll ever get to a shiny, happy people type of world without discord or disagreement, but I believe we can do better than this.  The outpourings of support by the Libyan people and people across the globe for my fallen colleagues and my fellow diplomats has been heartening - there's a reason these images are spreading across Facebook like wildfire.  It's sad that the misguided actions of a small group of extremists and the death of innocents is what brings us to this moment, but it's the nature of the beast, sadly.  I've had a lot of flashbacks to 9/11/01 this week and the collective national and international response of humanity and love.

Most thought-provoking of all, though, has been seeing more clearly than ever the parallel worlds that exist in my life.  I want to phrase these next thoughts carefully because I don't want to be misunderstood, and I'm not complaining here.  I'm reflecting and realizing.  But I had the same conversation several times today, both online and in face-to-face and phone conversations, and I am realizing that I was not the only one.  So bear with me.  The Foreign Service community lives a unique lifestyle.  What we do is often hard to understand to anyone else, let alone how we do it.  We speak our own language(s), we use impossible acronyms constantly, we plan our lives around bidding and assignment stages, we live much of our lives outside America, and there's a certain degree of mystery around what we do.  There's a lot of misperceptions and assumptions about what we do (cocktail parties and cookies and needlessly spending taxpayer money come to mind!), and we're perhaps not as good as we should be at advocating for ourselves and taking away said mystery.  That's a whole other conversation.  But I guess what I'm getting at is, because we're such a small group with unique life circumstances, we are tight-knit and supportive, out of necessity as much as convenience.  I've written about that a lot, especially specifically in terms of the FS blog community.

So here's why this is relevant right now.  My FS community is rallying.  We're posting articles and photos and statements and messages of grief on Facebook and our blogs.  We're huddling around tv screens to watch CNN during breaks at work and trying to fill in the blanks with whatever information the next person might have.  We're calling each other, going out to dinner or lunch or for drinks after work.  We are changing our profile pictures to the now viral black ribbon with the State Department logo.  None of this is official - we're all doing this on our own time and of our own volition.  But what has struck me this week is how few others are.  I have had a lot of family and friends check in with me and express condolences on things I post, but I can count on one hand the number of Benghazi- or Embassy protest-related posts by non-FS people on Facebook this week.  And my mom counts for at least two of those.  Let me be clear - this is NOT by any means a judgment on what other people choose to post or a selfish belief that what is going on right now is the center of the universe.  It is merely an observation.  Granted I'm a bit biased, but CNN and other media outlets are legitimating my 24/7 focus on my colleagues around the world, as are all my FS friends/colleagues.  (The two words are often interchangeable.)  At least for this news cycle.     But I spoke to my mother about this today who also had noticed this phenomenon among her own communities, which made me think about it a bit more.  It just reinforced this parallel world that what I spend so much of my life focused on is so far off the radar of so many others, even when it's on the international news radar.  Again, I'm not judging; this happens for so many other careers/professions/communities every day.  But it's been food for thought for me this week.  The realities of life for ever person are entirely different and incredibly fluid and dynamic, and the interconnectedness of social media allows us to see that much more clearly and in real time.  But when something like this happens and so many people rally like they're doing, it creates a visual (if partially virtual) representation of these parallel worlds.

I don't know what I wanted to achieve with this post, aside from expressing my profound grief for my fallen colleagues and sincere condolences to their loved ones, as well as to do a dump of the many jumbled thoughts in my head.  And I don't think I've been very articulate (I blame the head cold), but for some reason I think, maybe, some of my FS peeps (that's soooooo not a word I use, but I'm using it here for lack of a better one) will indeed get it, as disjointed as it is.  So to the friends and colleagues and, especially, families of Chris Stevens, Sean Smith, Glen Doherty, and Tyrone Woods, I offer thoughts and condolences and thank yous for the service of your loved ones.  They paid the ultimate sacrifice for the country they loved, and I respect and honor that commitment.  To my friends and colleagues worldwide, stay safe.  Continue to represent America as you do so well, but be vigilant and cautious.  We can't afford to lose anyone else in our community. 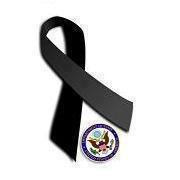 Statement by Secretary Clinton:  "All over the world, every day, America’s diplomats and development experts risk their lives in the service of our country and our values, because they believe that the United States must be a force for peace and progress in the world, that these aspirations are worth striving and sacrificing for. Alongside our men and women in uniform, they represent the best traditions of a bold and generous nation."
Posted by Sadie at 9:20 PM 5 comments: