I suppose it's time to stop procrastinating and actually write the announcement for next week's State Department Blog RoundUp, since Small Bits and A Daring Adventure are both (rightfully) linking here :-).

So here goes!  I am hosting the final State Department Blog RoundUp of 2010, which, predictably, calls for reflections on this year and looking ahead to 2011.  Here are some ideas for posts, though feel free to create your own!
In keeping with the new RoundUp format, please link to your blog (or others you want included) in the comments section.  Alternatively, you can email me.

(The continuation of this story...)

Wednesday, December 22, 2010
Dear Diary,
My boy came home last night! It was such a surprise. I was sleeping in front of the fire. (I was really tired because I was out running around all day while Grandma and Grandpa were at work. I found a great swimming pool toy in the next door neighbor's garage and played with it in the middle of the road. What a great chew toy) Anyway, Grandma came in and had my boy with her! We rolled and hugged and kissed for about an hour! I am so happy! I had to stay up late, though, because my boy was up really late cleaning up our room, vacuuming up my decorations, and trying to fix the door I made into a half door. My boy didn't have to work today, so we just hung out together and I waited in the car when he went skiing this afternoon. What a wonderful day.

Thursday, December 23, 2010
Dear Diary,
My boy went to work today and I stayed home with Grandpa. He took me with him in the truck to go get my Christmas present. I got a new collar. It is shiny and bright. They call it a choke collar and I think I look pretty good in it, if I do say so myself. But my BIG Christmas present said, Canine Home Training System on it. I like it a lot. Grandma and Grandpa call the "The Final Resolution." The picture is below.

I think this is going to be my last diary entry for a while. 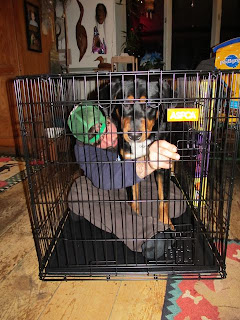 This absolutely hilarious post is entirely thanks to my mother.  My youngest brother went away for a week and left my parents with his year old, 110lb Bernese Mountain Dog/Red Fox Labrador puppy, Louie Dog.  Louie is a very sweet, obedient, and lovely dog... when Dylan is around.  But whenever Dylan is gone, Louie Dog turns into an anxious, destructive, Marley-like basket-case.
This is the email I received when I got to work this morning.  I proceeded to laugh so hard I almost fell out of my chair and my colleagues came running to see what was wrong.  Then there was the follow-up entry from later in the day that started the laughing all over again.  (Sorry Mom and Dad - it's really funny when you're not living it!)
Happy reading... and be glad it's not your house!
Tuesday
My boy left me today.  Grandma locked me in my boy's bedroom with a nice blanket to lay on, a full bowl of water, some dog cookies, and a nice bone filled with peanut butter and frozen.  It was nice.  I got a little bored and shredded up some paper for variety.  Grandma and Grandpa gave me good lovings, belly rubs, stretches, food, and I got to sit on Grandma's lap for about an hour.

Wednesday
Same ol', same ol'.  Grandma set me in up my boy's room again and locked me in with all my goodies.  I was good but was more bored today, so I chewed up some stuff on my boy's bed, like one of his slippers and a package of plastic cookie cutters and gnawed on his business portfolio a little.  Grandma and Grandpa were still really good to me when they got home and we had a good night.

Thursday
Locked up in the room again with all the usual goodies.  This time, I watched.  When I got bored, I figured out how to unlatch the door from the inside.  I had so much fun!  Found the roll of toilet paper and decorated the whole house with it until it ran out.  Then, I ate the Christmas wreath on the door, ate Dylan's other slipper, sorted through the trash, ate three baseball caps.  Grandpa was really mad when he got home.

Friday
Even though they moved the nail, it didn't slow me down a bit.  After I finished my treats, I opened up the door and - Freedom!  Checked out the trash again.  The bathroom door was closed so I couldn't decorate the house with the toilet paper, but did find some mail to chew on. It looked so pretty afterwards.  I did find where they'd put the remainder of the slippers and the baseball caps from yesterday, so I was able to finish them off.  Ate some yummy cookies from the gingerbread christmas tree Grandma had made.  Grandma and Grandpa did not want to give me belly rubs tonight.

Saturday
Grandma was at work again but I hung out with Grandpa for half the day.  Then Grandpa had to go to town so he put me in the room again after resetting the latch.  He made a lot of noise with the hammer. Ha!  No problem.  I found a great box of kleenex that was really fun to rip apart.  I tried to check out a cast iron skillet on the stove, but it was clean.  I guess I must have turned on the burner under it because Grandpa was really scared when he got home.  He said something about trying to burn down the house and how lucky it was that he got home when he did.  Found a few other items -- random shoes and gloves to chew.  No sitting on Grandma's lap tonight.

Sunday
Grandpa was home almost all day today.  He put a new latch on the outside of the door, so I was stuck when he went to town again.  I found a nice tie to eat and was just starting on a new hoodie when he came home.  I spent a lot of time outside tonight...and they won't decorate the tree until someone is home all the time.  It looks stupid there in the living room with nothing on it.  Where is their Christmas spirit?  No one would talk to me tonight.

Monday
Grandma gave me FOUR bones today.  Two were stuffed with peanut butter and frozen.  Two had little doggie cookies stuffed into them.  It took me a long time to work those out.  I couldn't figure out how to get out of the room with the new latch on the outside of the door.  So, I took the door apart and jumped through the nice big hole I made.  I had to completely chew up the Jamaican towel to get it all done. Tried to get the toilet paper again, but I couldn't find the end, so I just chewed it up in place. That box of Kleenex was out so I ate bunches of that.  Pulled down a little lamp next to Grandpa's chair but that was no good for chewing and had no decorative value.   I checked out the sink and thought I'd found something good, but it was just coffee grounds so I left it on the rug.  Perhaps I could get out the barn door!  But there are lots of coats hanging there.  I ate the grey jacket because it had stuffing in it.  Grandpa's Columbia jacket had a nice lining that felt so good in my mouth.  Finally got all four jackets down, but that darned barn door wouldn't budge.  Just then Grandma came home from work.  I've been outside for a very long time now.  I heard Grandma and Grandpa talking about a chicken coop tomorrow.  I hope it is something that is fun to chew!!  I hope they feed me tonight.  They just seem so grouchy all the time.  I guess it's because they are so old...

I'll write more tomorrow when I can talk about all the fun I had in that chicken coop!
Louie Dog


Another Louie Dog diary entry:
Tuesday, December 21, 2010
Grandpa spent a lot of time last night, going to the store to get a slide bolt (whatever that is…can’t eat it, but the package was good), spreading hay around and buttoning up the chicken coop.  He put me in it this morning before he went to work.  Boring!!!  I greeted Grandma when she was getting in her car to go to work.  The door and screen were no match for me.  Grandma muttered a lot (what am I going to do now? There is no place to lock you up…the dog catcher will get you if I let you stay out but I can’t keep you in the house)…mostly blah, blah, blah.  She gave me two big peanut butter bones and put me back in the coop with a heavy table propped against the door.  Ha!  I’ll figure this out too.  I wonder if I can find that dog catcher she keeps talking about?  Won’t Grandpa be surprised when he comes home from work to find me in the road waiting for him??

****
Some pictures of Louie Dog - the first two from November; the next three from last April, when he was a (relatively) tiny little puppy. 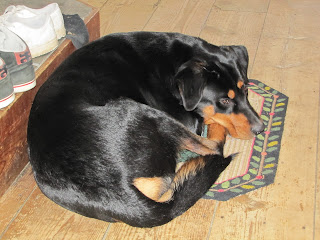 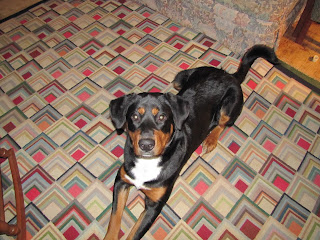 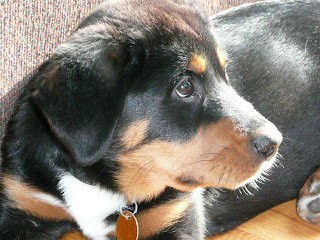 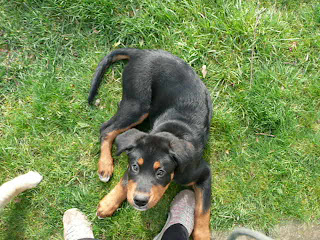 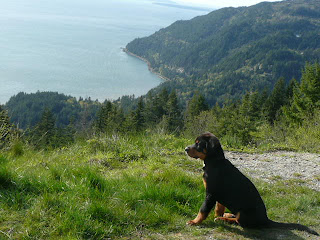 I have awesome colleagues.  There's no doubt about it.  I enjoy going to work, and they've quickly become a surrogate family and support system.  The locally engaged staff are also really great about guiding me in Saudi culture and society (even though none of them are Saudi).  So I was thinking of ideas for a nice, non-Christmas-y seasonal celebration.  And I found one.  Something that is a New England tradition and that I remember doing at least a few times growing up.  (Am I right, Mom?)  I bought my kit from the Vermont Country Store, purveyors of oddities and other wonderful goods.  It arrived yesterday.  I convened a staff meeting today to discuss door decorating for the Consulate's contest and to share my holiday treat.  About that time my boss remarked, jokingly, that it was an odd choice for the Saudi context.  And then, for the very first time, I realized how culturally inappropriate my idea might be.

I had brought in a peppermint pig.

But a pig.  Really, Sadie?  I turned bright red, could barely speak, and couldn't stop apologizing.  (About half our office is Muslim.)  But everyone took it in stride, laughed at my obvious embarrassment, and took turns talking about good fortune and hammering the pig.  I cannot believe it never occurred to me to think about the religious aspect of the pig.  The good news is, I was so obviously flabbergasted by my own faux pas that everyone knew it was truly a mistake.  And everyone did enjoy using the hammer!

The other great thing about my colleagues is that they'll tell me the truth.  So when I apologized to people individually later on, they told me that they knew I was just sharing a tradition and not trying to offend anyone.  And laughed at me again.