Day three at Selous started out early and slowly.  We went on an early morning game drive, a fabulous three hours out in the bush.  Aside from the cicada forest and a few herds of impala, the only real sighting of the morning was in a beautiful meadow where impalas, zebra, giraffe, and some ground hornbills were grazing.  That's it.  Since we'd had such an awesome day the day before we sort of chalked it up to safari luck and headed back to the lodge for breakfast.

We were halfway through a leisurely breakfast and musing about morning naps when one of the managers came to our table and told us with a big smile he was putting us back in a vehicle right now.  We laughed, thinking it was a joke about the hard roads, but then he got serious and said, "no, really.  Be at the entrance in ten minutes.  The group going to the airport just spotted wild dogs."

Wild dogs are very rare across Africa, and Selous has a relatively healthy population of them, though they're not often seen.  Our guide said nobody had seen any in more than three weeks, so our hopes had not been high.

We wolfed down our eggs and climbed the 75 or so steps to the vehicle launch.  The dogs had been spotted not too far from the lodge, but they were on the hunt and moving fast.  Our hopes were up, even if we knew it was a long shot.  The next hour was spent tracing and retracing the steps of the wild dogs, but we didn't find any sign of them.  We decided we'd leave for our afternoon drive a bit early to see if we could find them napping in the heat of the day.

I then took a heat of the day nap before lunch, after which we set back out on a drive.

This drive was, until the very end, almost exactly like the morning.  We spent almost five hours driving around new areas of the park, starting with the wild dog areas and continuing to many waterholes.  There was nothing at any of them.  Nothing.  Every once in a great while we saw a warthog or a couple of impala, but even those were few and far between.

We began to get desperate for animal life, keenly looking for frogs in puddles and exclaiming over birds we'd seen a million times before, even though none of us are birders.  We were super excited to see a small flock of guinea fowl!  We endured another rainstorm, huddling under rain gear rather than putting down the canvas sides of the vehicle, which can be suffocating.

Finally we hit a spot where there were several giraffe and a few zebra in the distance.  We were deliriously excited.  From there we turned around and started back to the lodge.  We were all pretty silent, staring intently around us in search for a leopard or even a buffalo, anything to break the monotony.

We were about 30 minutes drive from the park when T spotted vultures in a tree.  We slowed down and watched them, as they're so often a good indicator of something good.  As we looked we noticed more and more of them in the trees; this wasn't just a place to perch.  We went offroad into the surrounding bush, eyes peeled for a kill or a predator.  We saw nothing except more vultures until all of a sudden our guide very kindly said "lion" and pointed straight ahead.  None of us saw anything, until all of a sudden a male lion jumped up and ran behind another bush to avoid us.  We watched him for a while and determined he was alone, but we still didn't know why he was there or why the vultures were there.  We drove a little farther from the road, toward the larger cluster of birds, which, we now saw, also included marabou stork.

Our guide pointed down a ravine to a riverbed where a large adult hippo carcass lay, the body bloated and the head partially eaten away.  Our guide surmised that the hippo must have died of natural causes a day or so ago, and the lion - an older one - had been attracted to a few easy meals.  He thought the lion might be too old to hunt on his own and dependent on scavenging.

We watched the birds feast for a few more minutes and then headed back to visit the lion.  He was exceedingly skittish, constantly moving and hiding from us, but always with an eye on us to track our movements.  Very different than our female lions yesterday!  At one point he seemed to be threatened enough to pounce, even though we kept a respectable distance from him, so we headed back toward the lodge.

With this one sighting, the rest of the day seemed to wash away in memories, with only the good and exciting to remain.  This is so common on safaris, forgetting the hours without seeing anything as soon as you have five minutes of excitement.

Arriving back at the lodge we excitedly shared our news with the staff and another family, who in turn showed us pictures of crocodiles belly flopping into the water from rocky outcrops.  A good day all around! 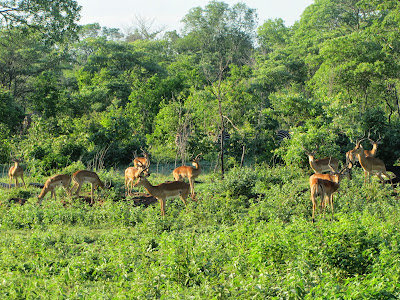 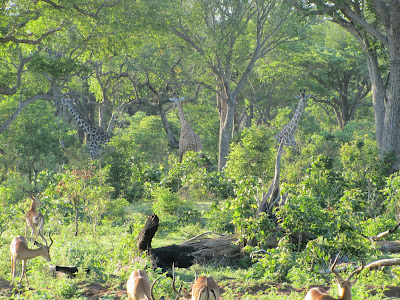 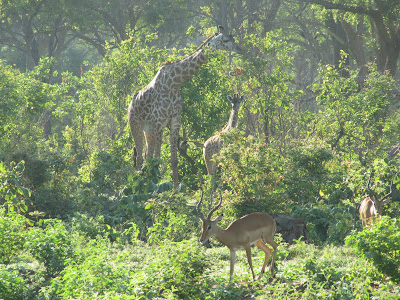 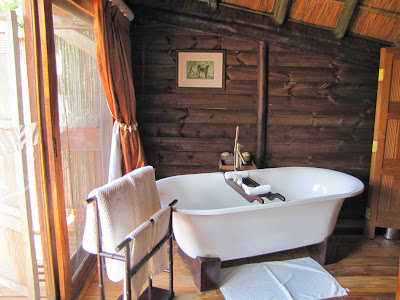 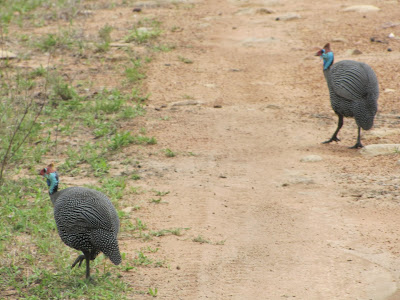 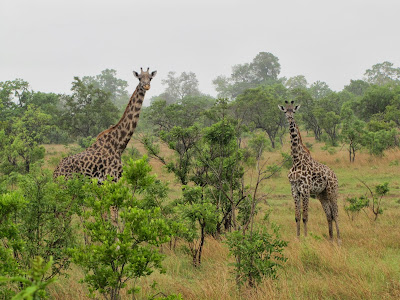 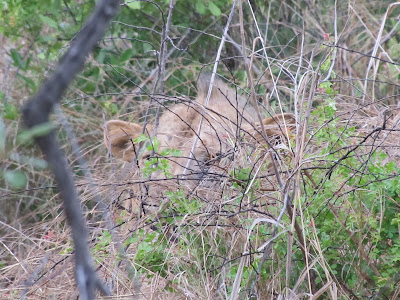 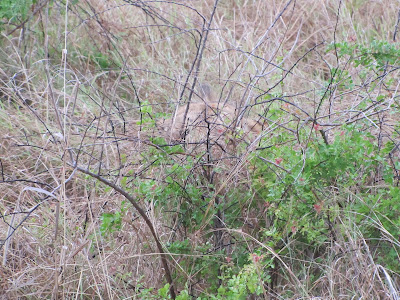 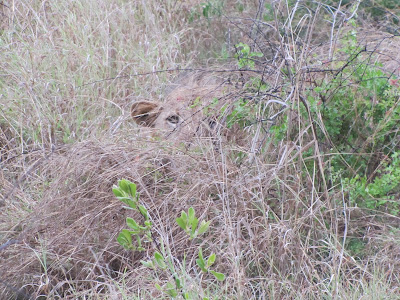 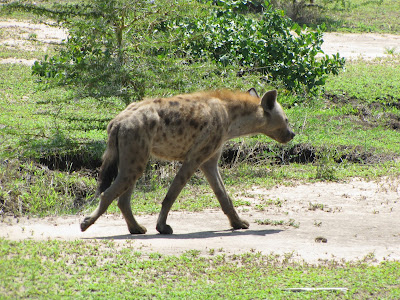 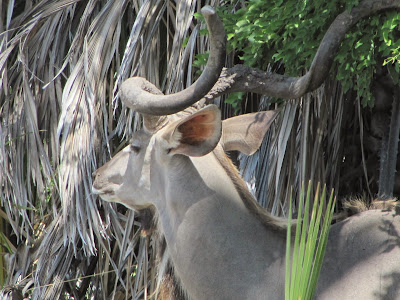 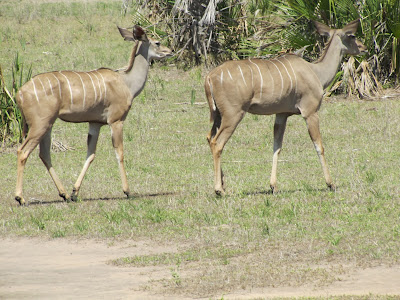 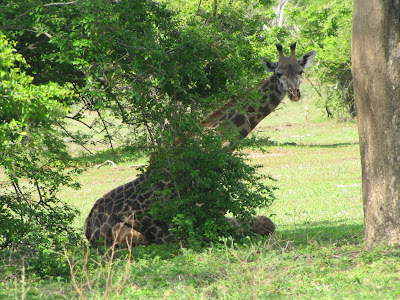 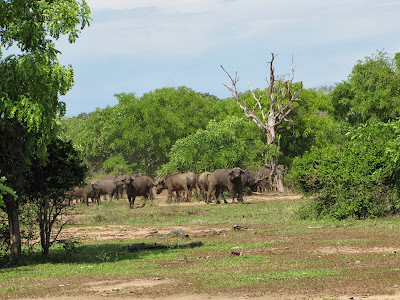 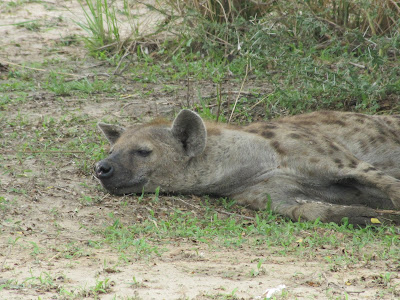 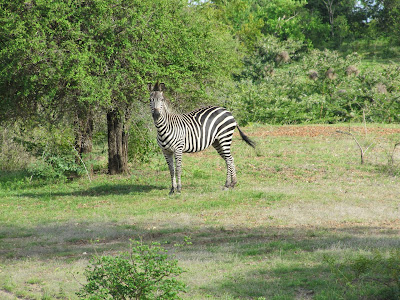