I haven't been blogging a lot lately, not so much due to being busy as to not being particularly inspired. I'm at the eight month countdown for leaving post, and it feels like everyone expects me to check out or acquire short-timer's disease sooner rather than later, which I don't really feel the need to do, at least for many more months. My colleagues might disagree, but I think I did a pretty good job of not checking out mentally in Jeddah until the last few weeks, and even then to a much lesser degree than many others! Truth be told, I'm not counting down from Kampala. This is a great post, I love my job, I love my house, I'm comfortable. And the things that drive me crazy about Uganda won't go away just because I leave; they'll just manifest themselves as other things in Lebanon and make me nostalgic for the good old days in Kampala.

Part of the issue is that while I'm leaving post this year, I'm leaving several months after the mass exodus that is summer transfer season, so I don't have the same sense of urgency/relief/stress that others are feeling right now. I'm looking forward to having more time to prepare for pack out (let's see if I use any of it wisely!) and less competition for GSO and other resources for actually checking out. Sadly I'll miss some good friends who are leaving this summer, and I'll have the inevitable but depressing task (that's not the right word, but you get the idea) of welcoming new people to post, making great new friends, and then leaving them in a few short months. This always happens, but it still sucks. One perpetual feature of FS life that not a lot of people talk about but everyone experiences.

My EER is well under way, so I don't have that pressure hanging over me right now, and our mission's big project for the spring will be over next week. I will have significant overlap with my successor but still need to work on SOPs and brain-dumps, and there are always long-term projects to work on.

So I like to call this unintended blogging hiatus a result of the eight month doldrums, but, really, it's just life. Because these aren't really doldrums, anyway; I'm not depressed/anxious/resigned or any of those things.

I could commit to posting a photo or quick story every day, but that's not really my style. I can only commit myself to so many things without losing momentum on all of them, and I'm trying to be good about working out, so I'm sticking with that one for now. I still have some travelogues to get up and will work on those, but the next trip is probably three months away, so until then expect a lot of cat stories/photos. (Followed by a safari-filled visit with my mom later this summer!)

Anyway, there's my random brain-dump for the day, probably brought to you in part by my being home sick this afternoon. I have been feeling off since Friday with no real symptoms I could put my finger on except fatigue, so I took advantage of a slow(ish) afternoon to come home and try to get better. And on the ride home I figured it out. As I squinted through my sunglasses because the sun was still too bright, it hit me. This is a migraine. Without the headache. It all made sense. Fatigue, light and sound sensitivity, a bit of nausea, and crankiness. None of them diagnostic on their own, but together - pow! I did have a headache yesterday but not a bad one or on par with a migraine, so I didn't connect the dots. Sure enough, two Excedrin Migraines and a cat nap (literally - they're still in my bed) later, and I am feeling much more like my old self. I don't get migraines very often anymore, thank goodness, and I very rarely get silent migraines, but it's not unheard of. I am feeling very empowered by having figured this out and addressed it, if you can't tell ;-).

So, there you have it. My caffeine-induced rant for the day (week, more likely).
Posted by Sadie at 11:22 AM 1 comment:

We woke up early on Sunday, but not nearly as early as we wanted. For some reason a lot of Ugandan tour operators and lodges aren't geared toward the early morning drives, which I think can be some of the best! A lot of lodges want you to eat breakfast first and then go out. So that's what we did Sunday, arriving for breakfast as soon as they opened, and had a quick fuel up before heading out.

Our drive was fun but not awesome; we found out later that the one group who went out before breakfast saw lions but nobody else did. Sigh. Our first big sighting was hyenas, not too far into the park. We saw one, then two, then soon the entire pack of six was visible. They marked territory, sniffed things out, posed for photos, and then took on up the road onto bigger and better pursuits. I've never seen a large pack of hyenas so close before; the ones in Amboseli were pretty far away in a mud pit. Very cool!

A few giraffes and quite a few DLTs crossed our path as we made our way to the river, where we reveled in birdlife, hippos, and buffalos. We saw a beautiful saddle-billed stork in the marshy area by the Nile and the usual egrets, yellow-billed storks, and assorted others. Another safari vehicle was taking a break nearby, its occupants getting out for a stretch. One woman had ventured away from the group right up to the river's edge. We kept waiting for a hippo or croc to get her, but she survived another day. Stupid.

We moved on, or tried to, as a giant herd of buffalo crossed the road in front of us. We were held up about five minutes waiting for them to move on, but, as buffalo are want to do, they kept stopping and staring at us. Not nature's smartest creatures.

We meandered back to the lodge without seeing any more predators, just the usual range of DLTs and assorted ungulates. We dispersed upon arriving, some napping, some lounging, but all relaxing for a lazy Sunday morning.

After lunch we hopped in the vehicle and headed down to the boat launch for our trip to the base of Murchison Falls. We boarded the low-to-the-water but sturdy aptly-named Hippo boat and headed off.

Almost immediately we saw two young elephants drinking water from the river and occasionally hiding in the foliage. Very cute. The trip was what you'd expect - lots of hippos and birds, the occasional crocodile, and ungulates grazing on the banks. It was wonderful. We didn't see any Shoebill storks, though, which was very disappointing, but I am hopeful I'll see one on a next trip.

We saw lots of bird nests in the cliffs, ingeniously camouflaged in natural and not-so-natural holes. Quite a few patas, colobus, and vervet monkeys were visible or at least audible as they played in the trees. We saw the elephant from the day before with the injured leg. He didn't look great and, in fact, as we were heading back to the launch he was lying down in the water. I really hope he was just resting.

The large schools of hippos were often content to just let us go by, though some insisted on standing and walking away from the boat. There were dozens of little ones, including some grazing on the banks with their mothers, which was a nice treat to see!

We passed the marker for the site of Ernest Hemingway's 1954 plane crash at Murchison Falls, the first of two crashes that day for him. Before long we docked against a small island in the middle of the river, the massively powerful Murchison Falls in sight a few hundred meters away. The power of the falls creates a great deal of foam, which was concentrated in this part of the river but visible even farther downstream. Very cool!

We headed back to the launch, seeing some of the same and some new animals. Getting back to the vehicle we elected to do a game drive rather than head right back to the lodge.

We had a good afternoon for giraffe sightings but not for much else. Or maybe I just took less photos of the same antelope we'd seen for two days. Sometimes it's hard to tell or remember. We did have an almost lion sighting, circling a lone male for an hour, though we never saw him. The other vehicle that got to the site a minute before us swears they saw him and they also circled with us, but I'm not sure they really did, because I've not known lions to be quite so good at (or inclined for) hiding.

Heading back to the lodge we enjoyed one last Ugandan sunset and then had a lovely last dinner with lots of laughter and stories.

The highlight of the evening happened a bit later. S and I had taken our showers and gotten ready for bed. We were in our respective beds reading by the light of our Kindles when we heard a commotion outside. S ran to the balcony and called me out. An adolescent elephant had made his way into the lodge grounds and was enjoying a meal of flowers and fresh water. He had apparently been there about 15 minutes already, according to E&A next door, who had been watching the whole production. The elephant had eluded the guards' efforts to scare him off and herd him off and instead turned on the spigot for the hose and was merrily drinking from it. When we arrived he was starting to get annoyed at the guards' efforts and was retreating quite unhappily, pulling down branches as he went. While perfectly capable of stepping over the fence at the edge of the property (right under our balconies!) he instead went through in one last act of defiance. Quite entertaining! 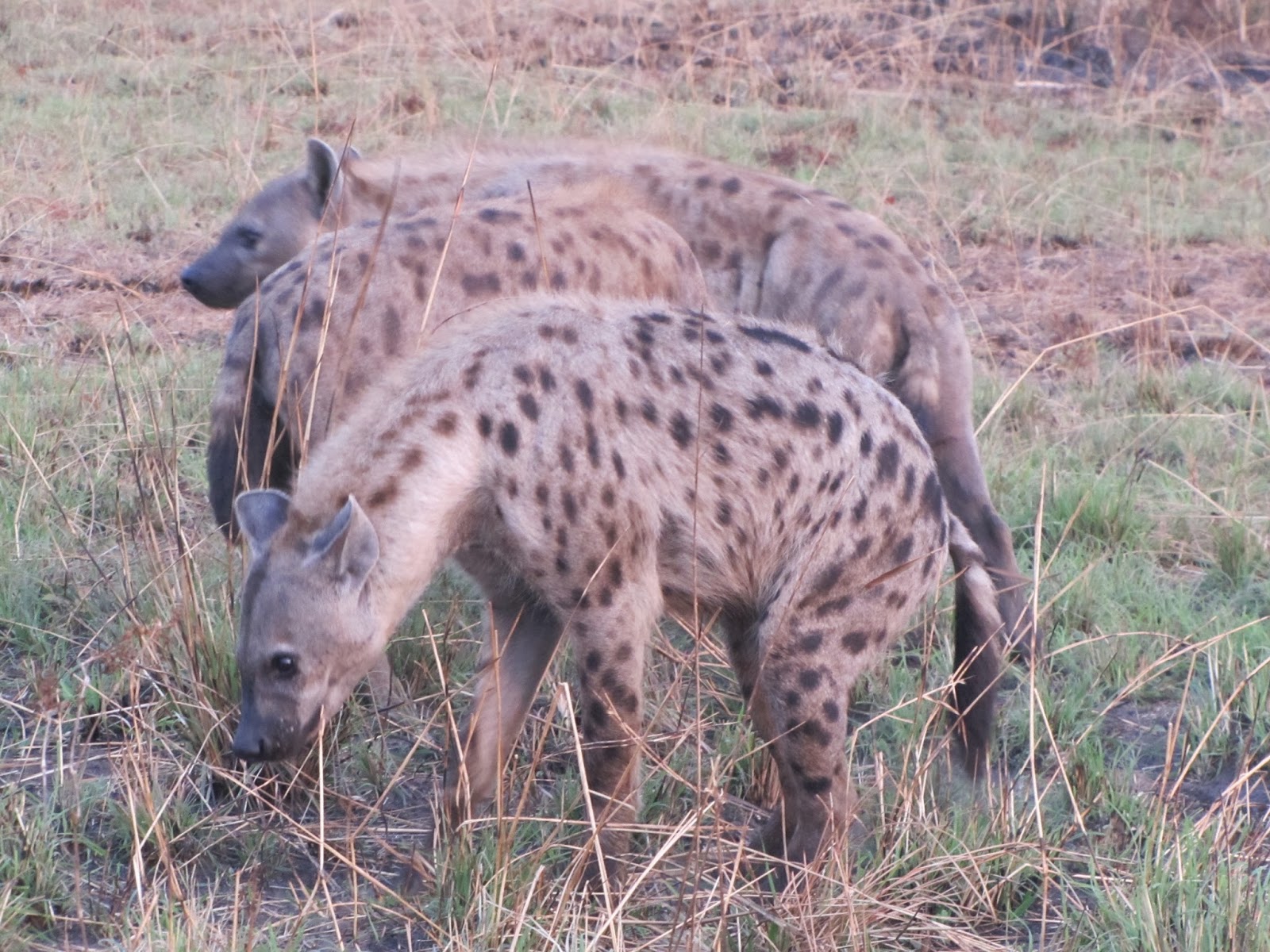 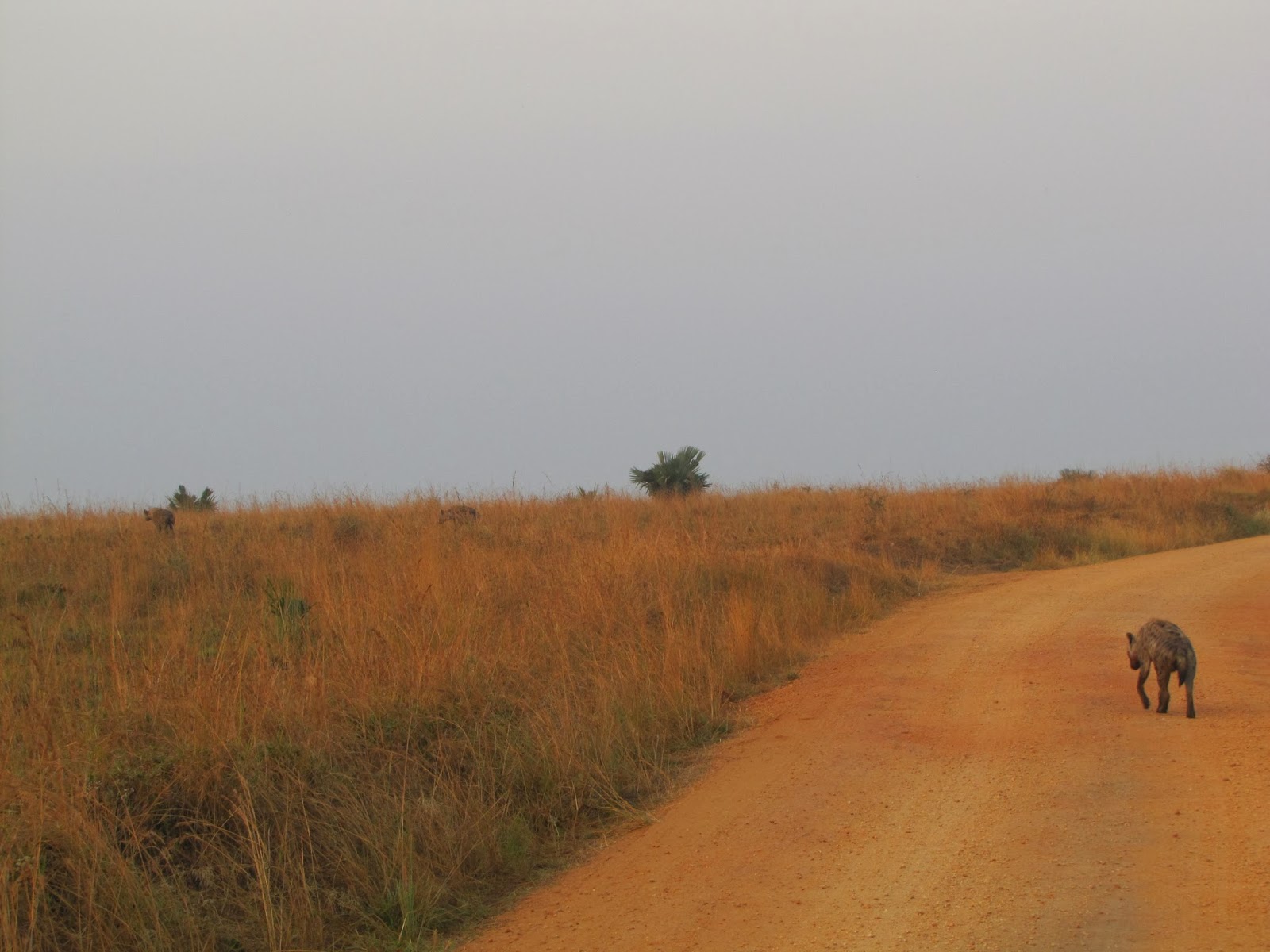 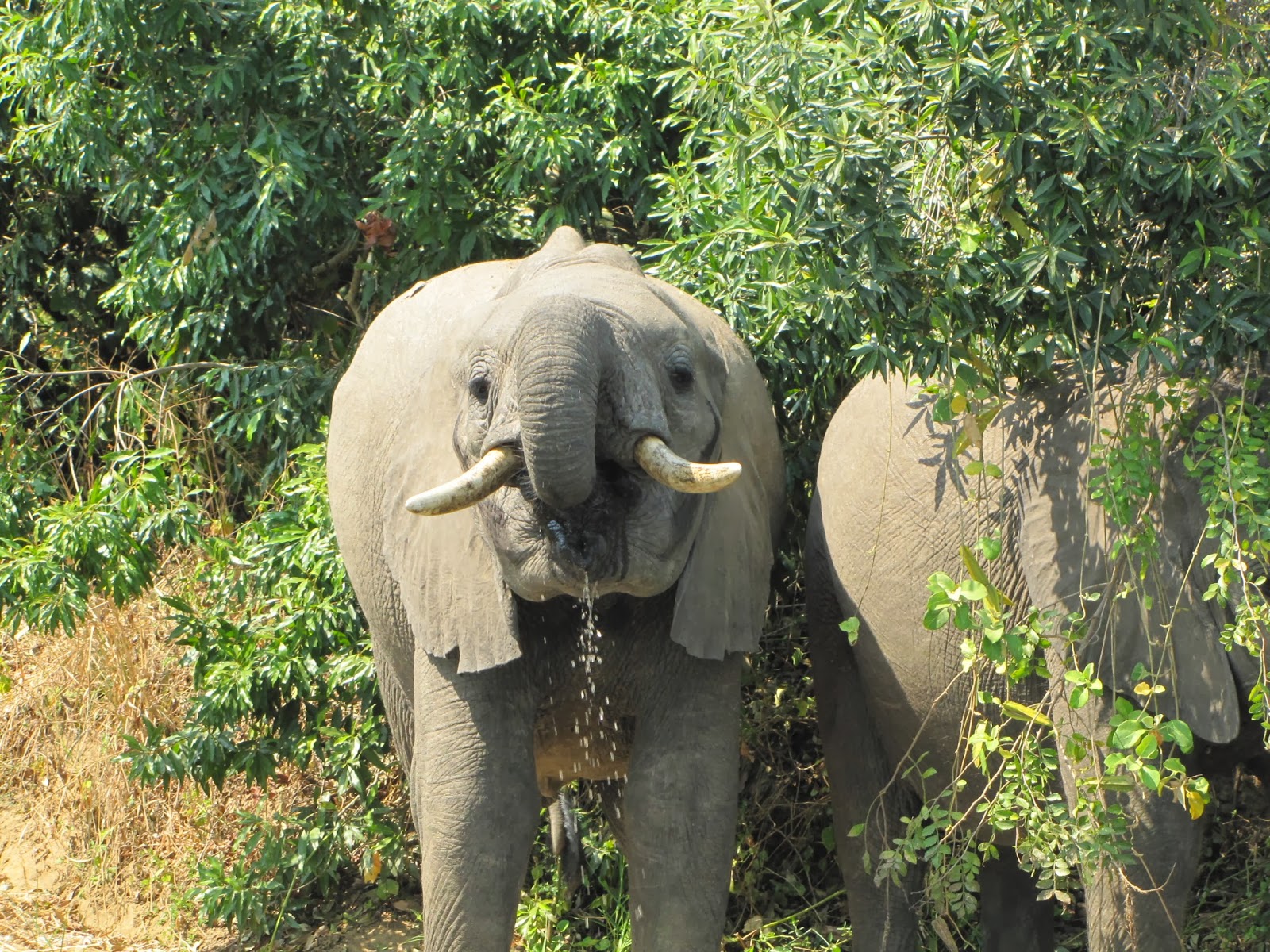 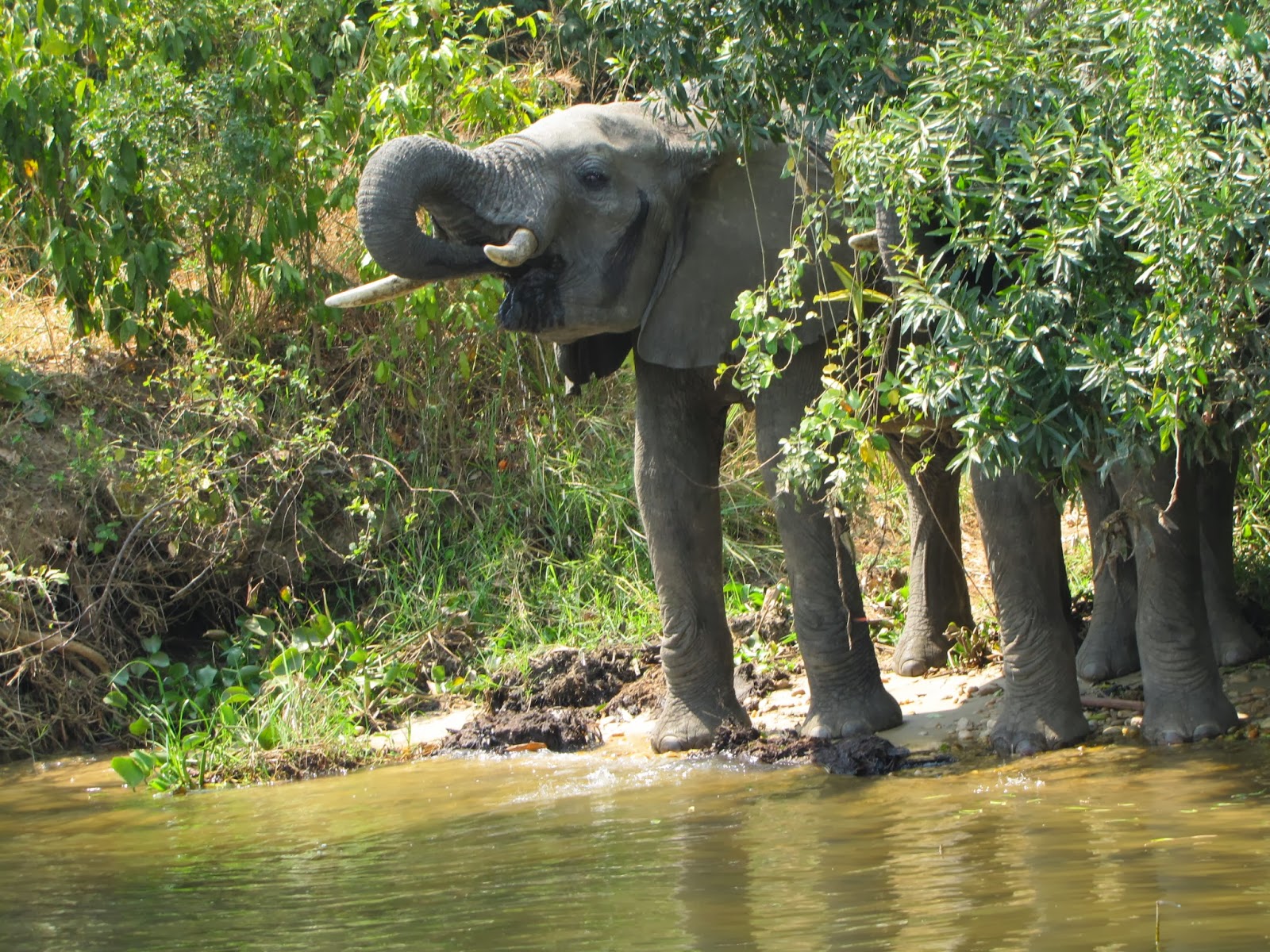 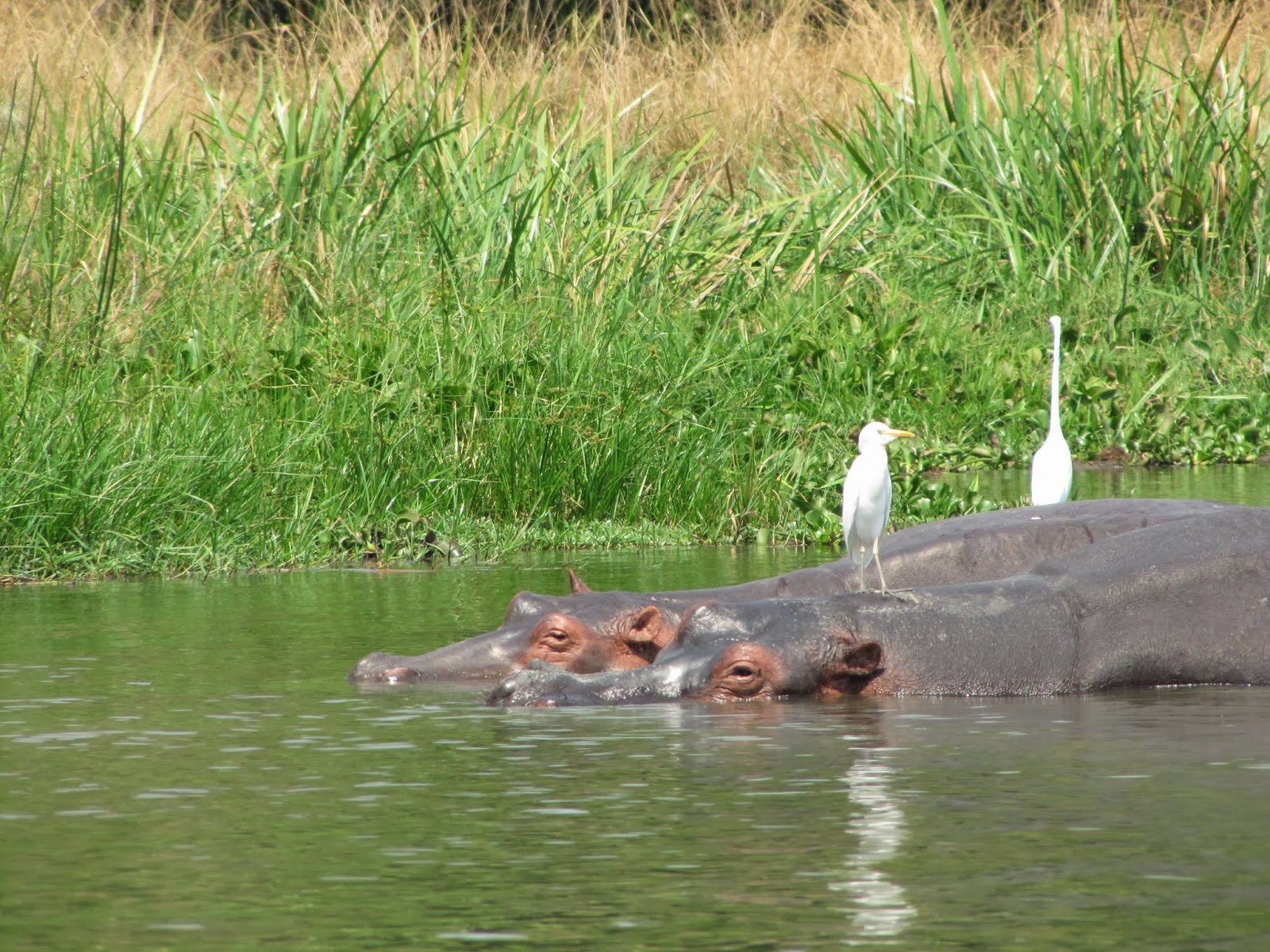 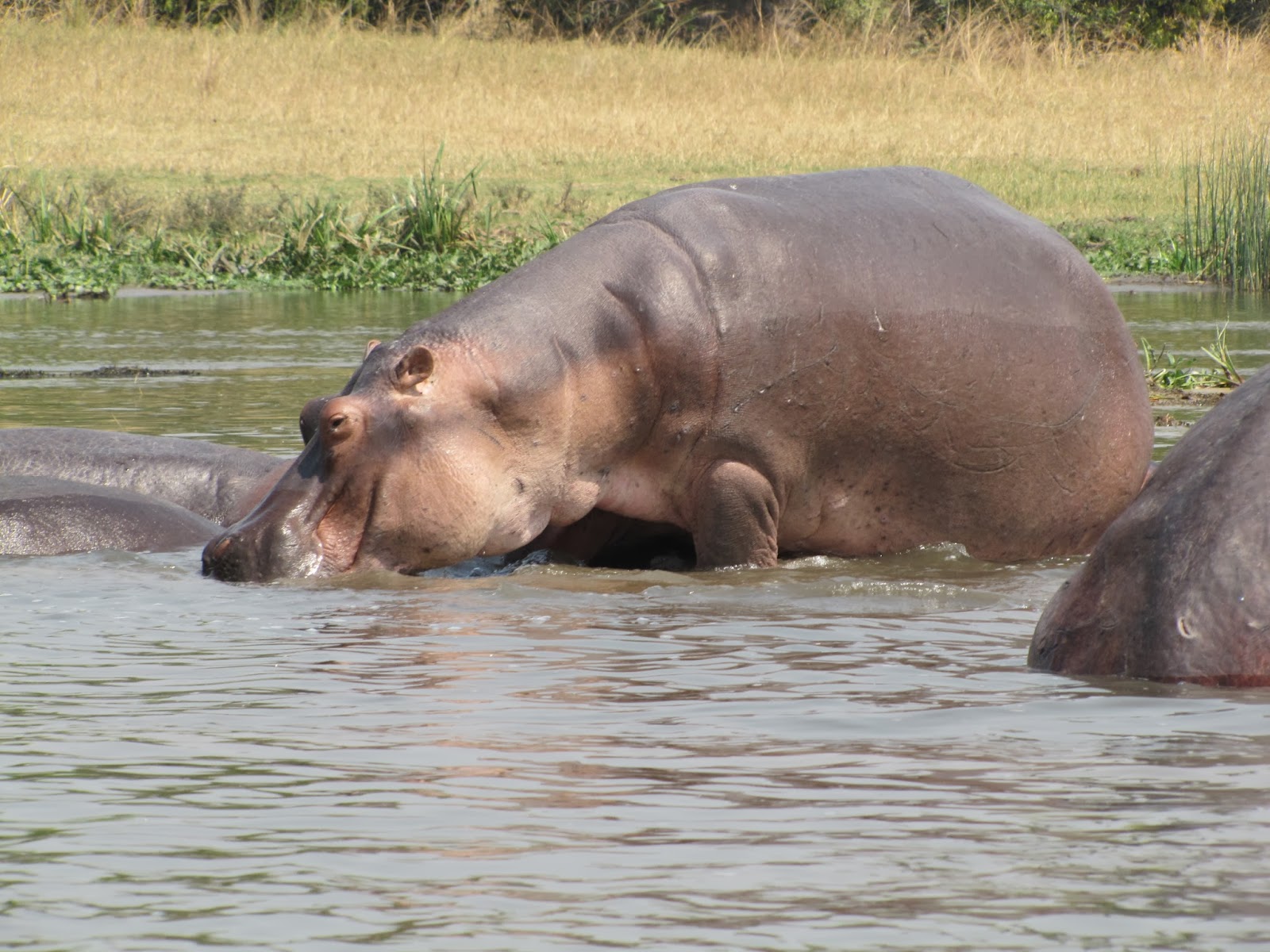 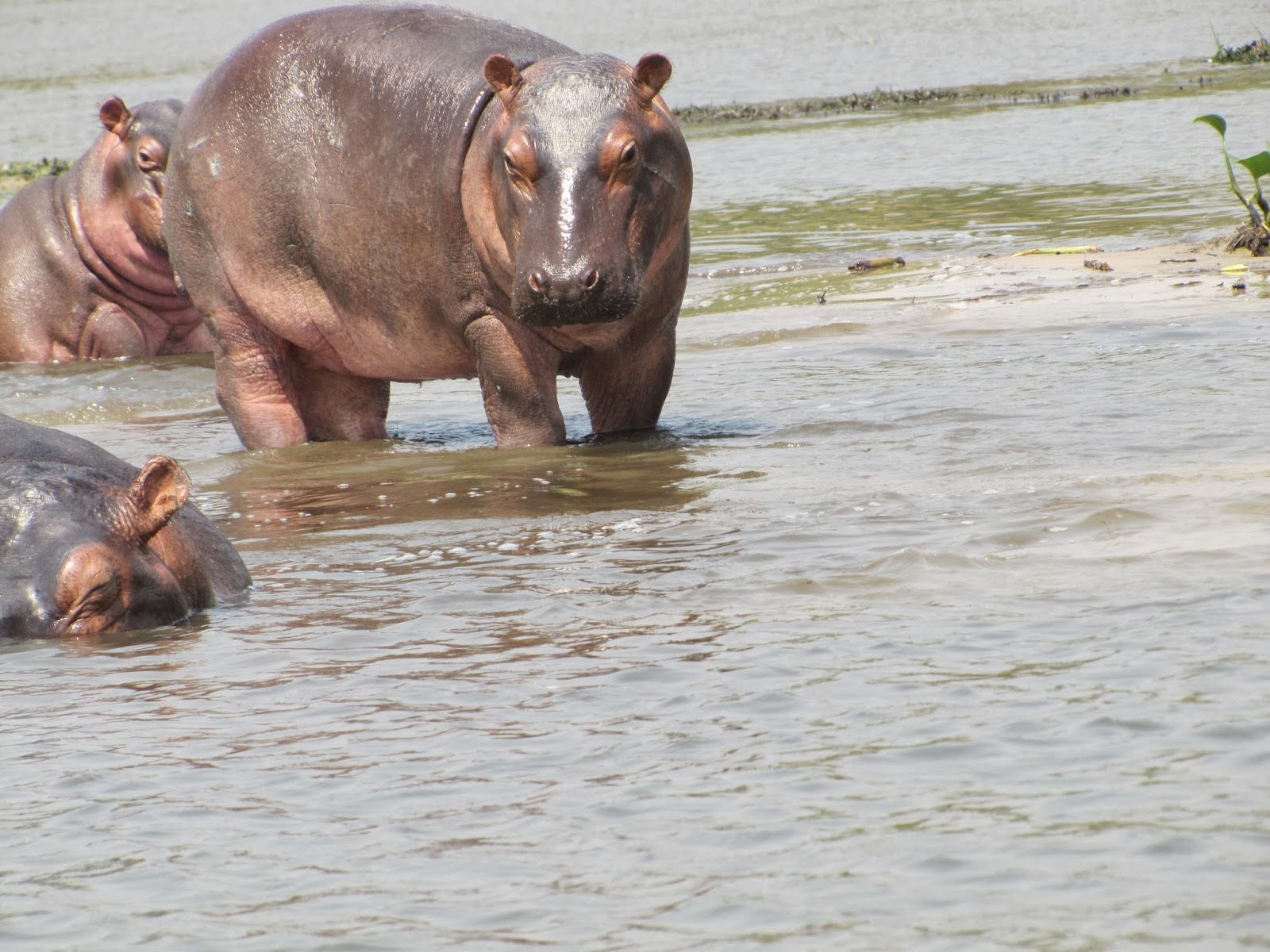 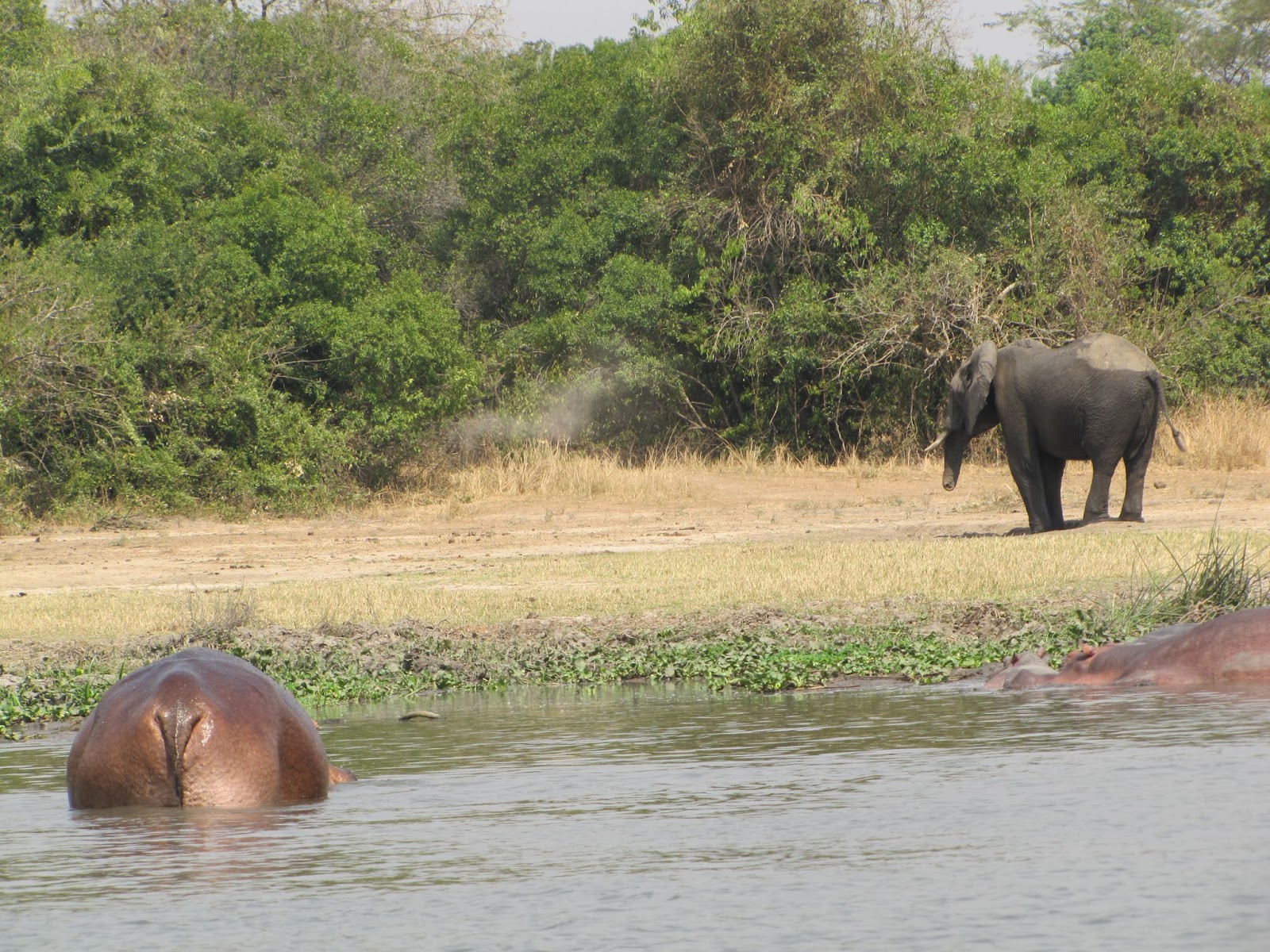 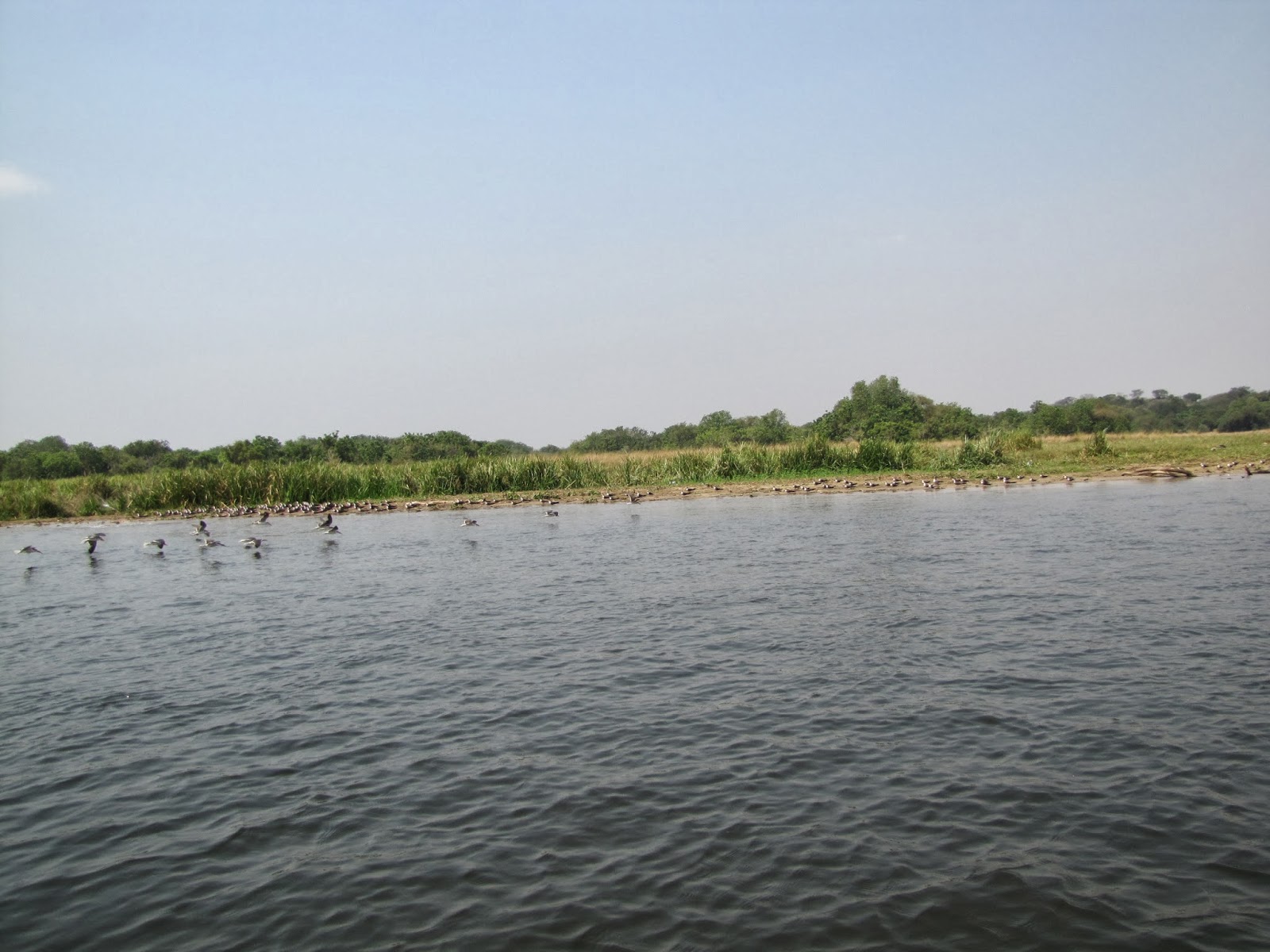 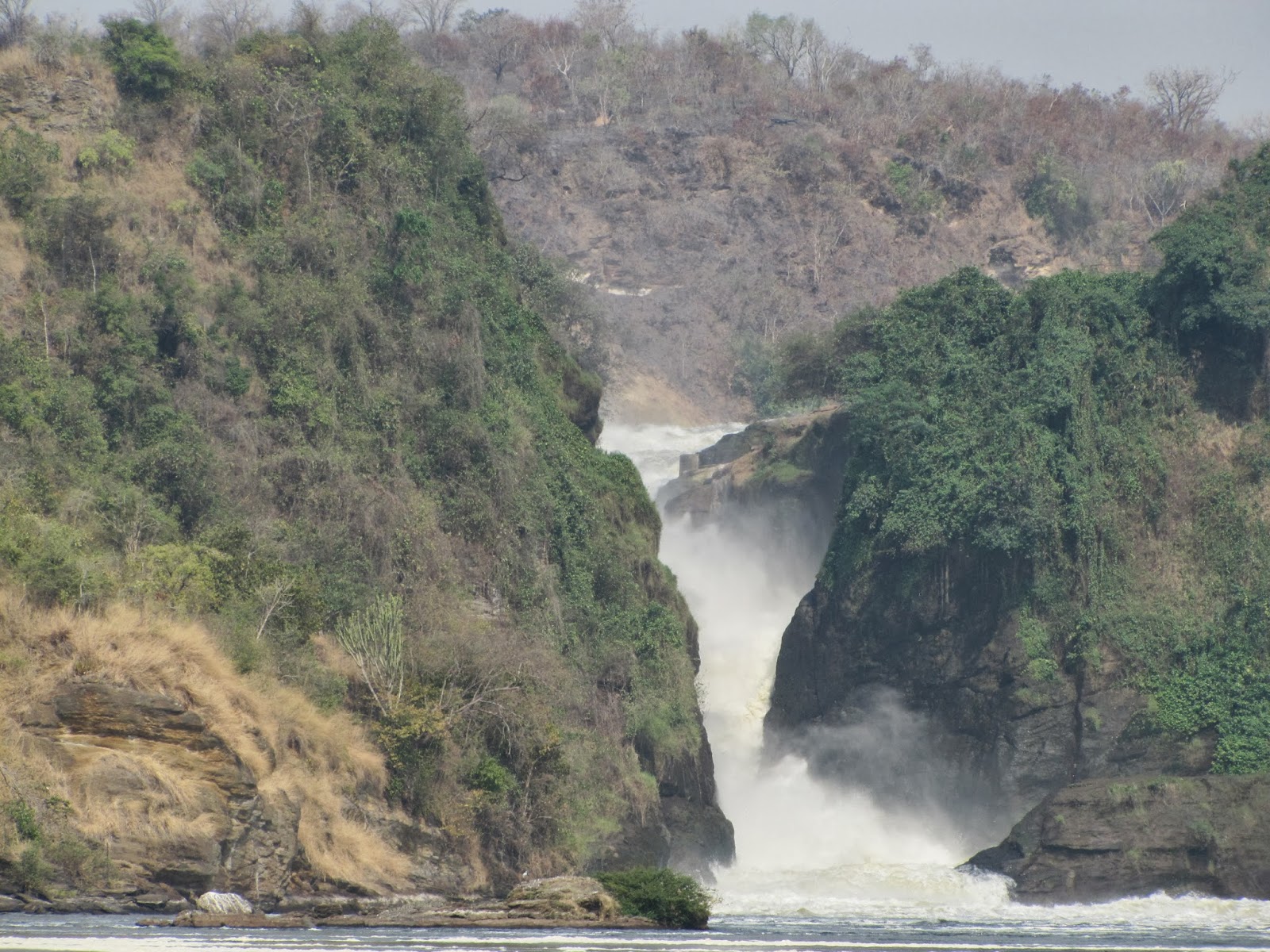 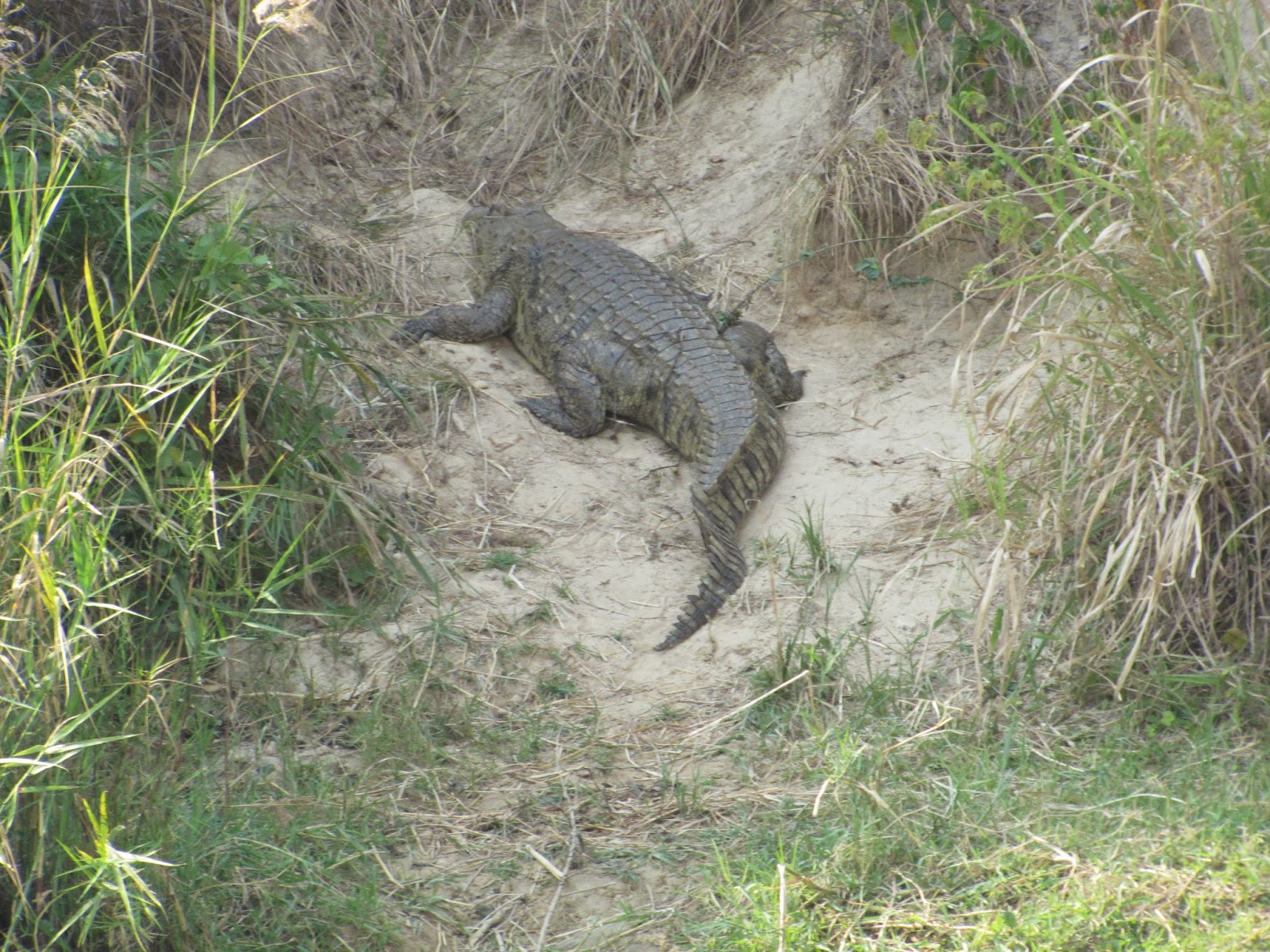 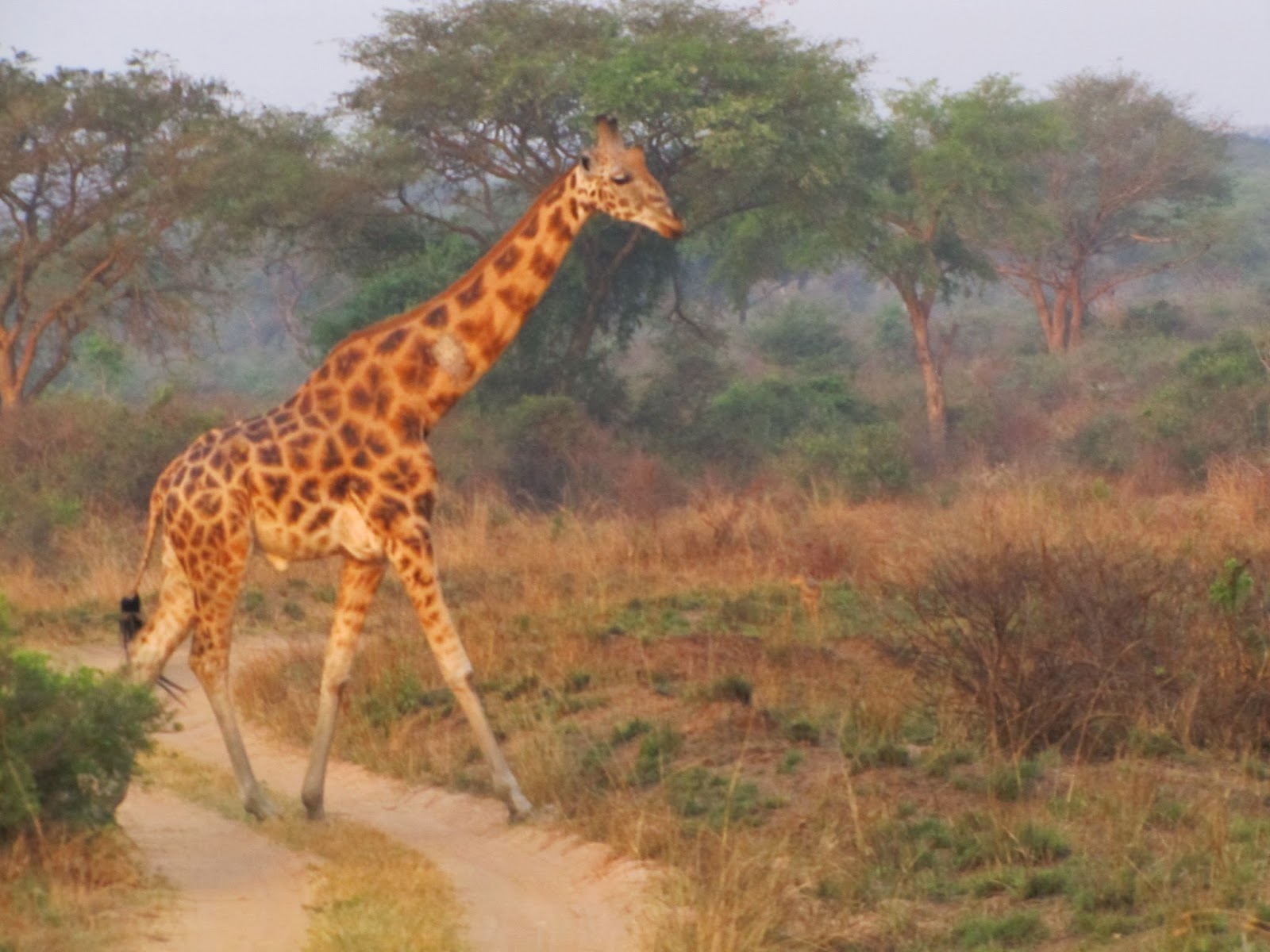 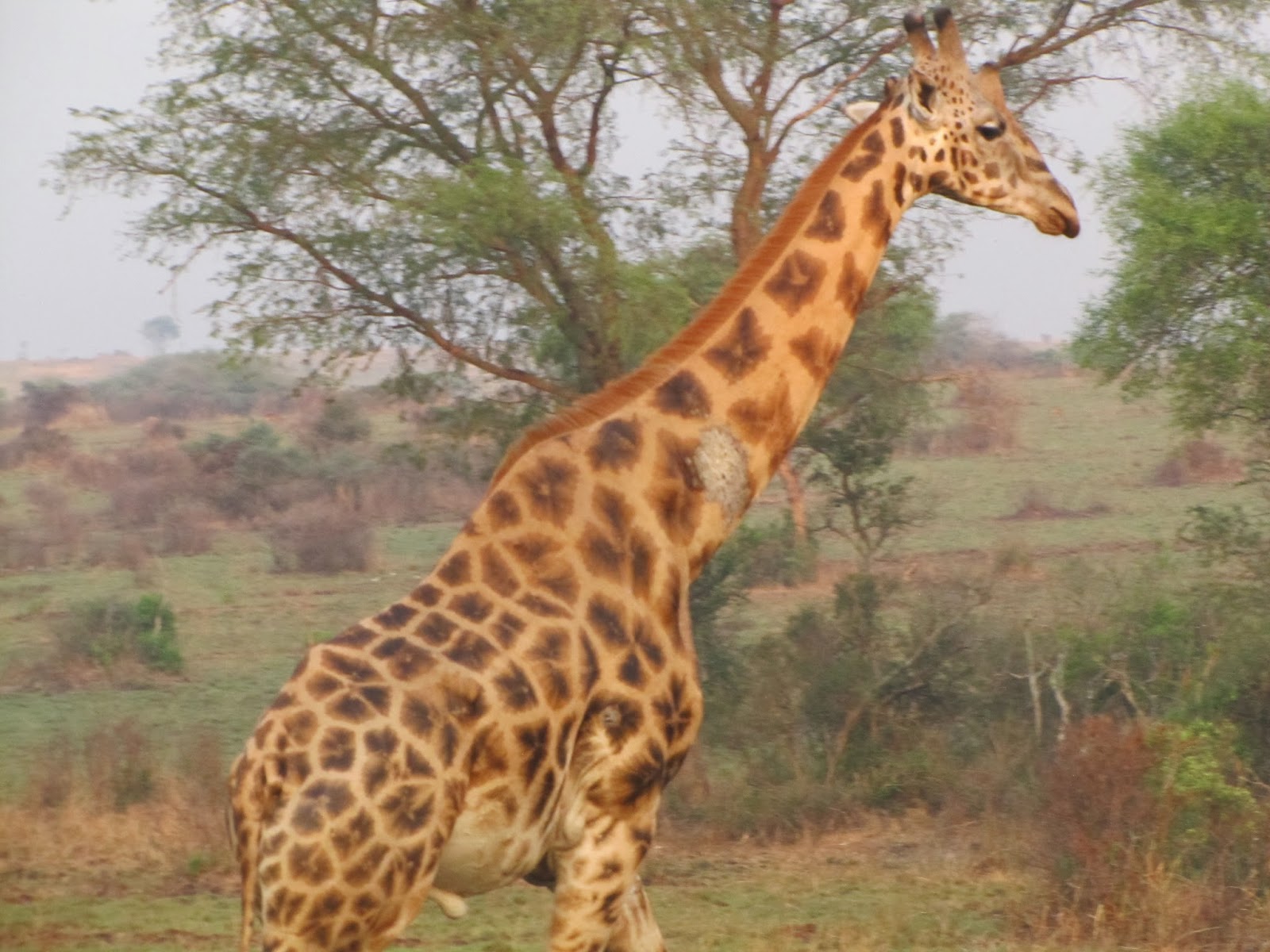 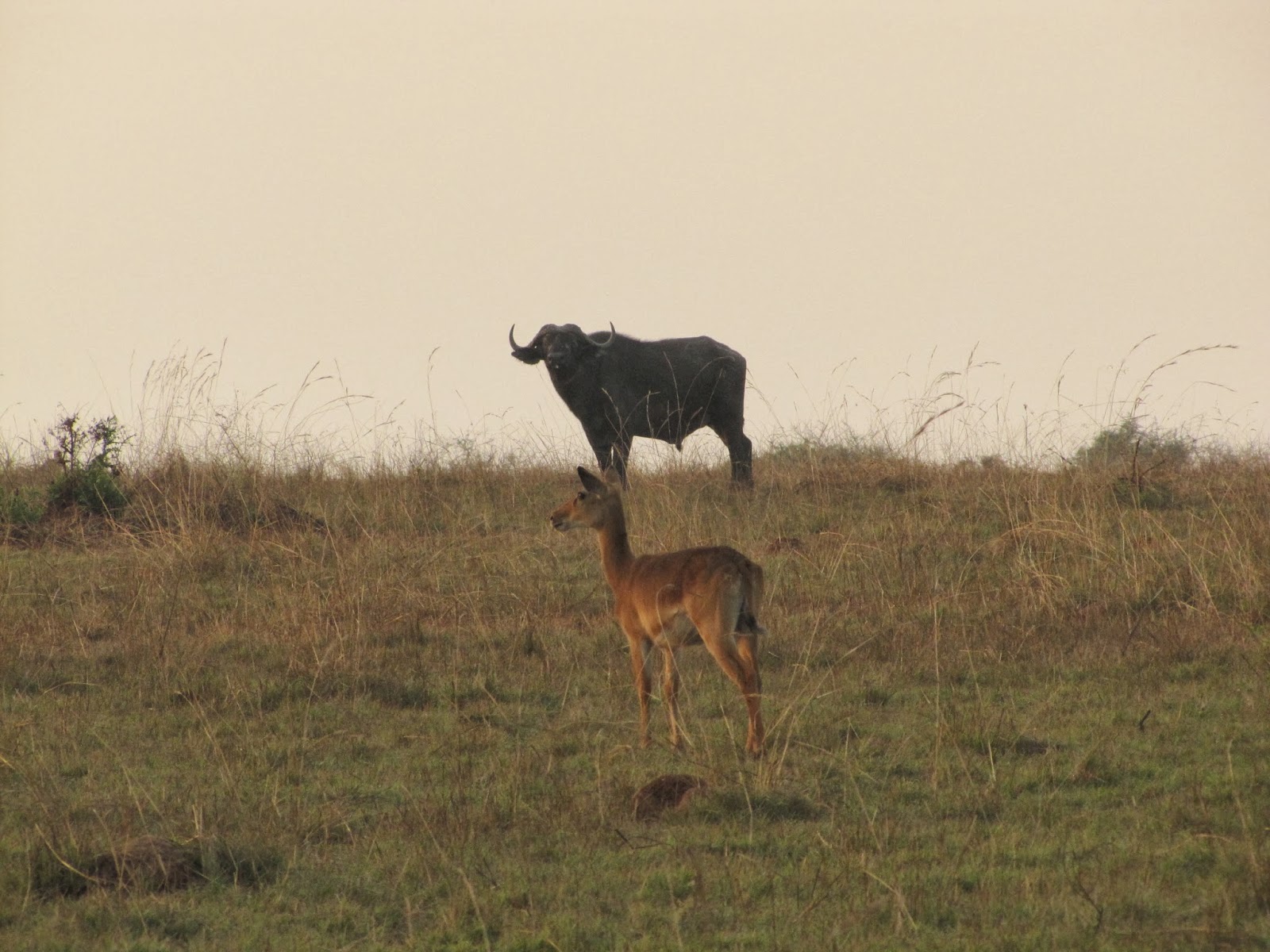 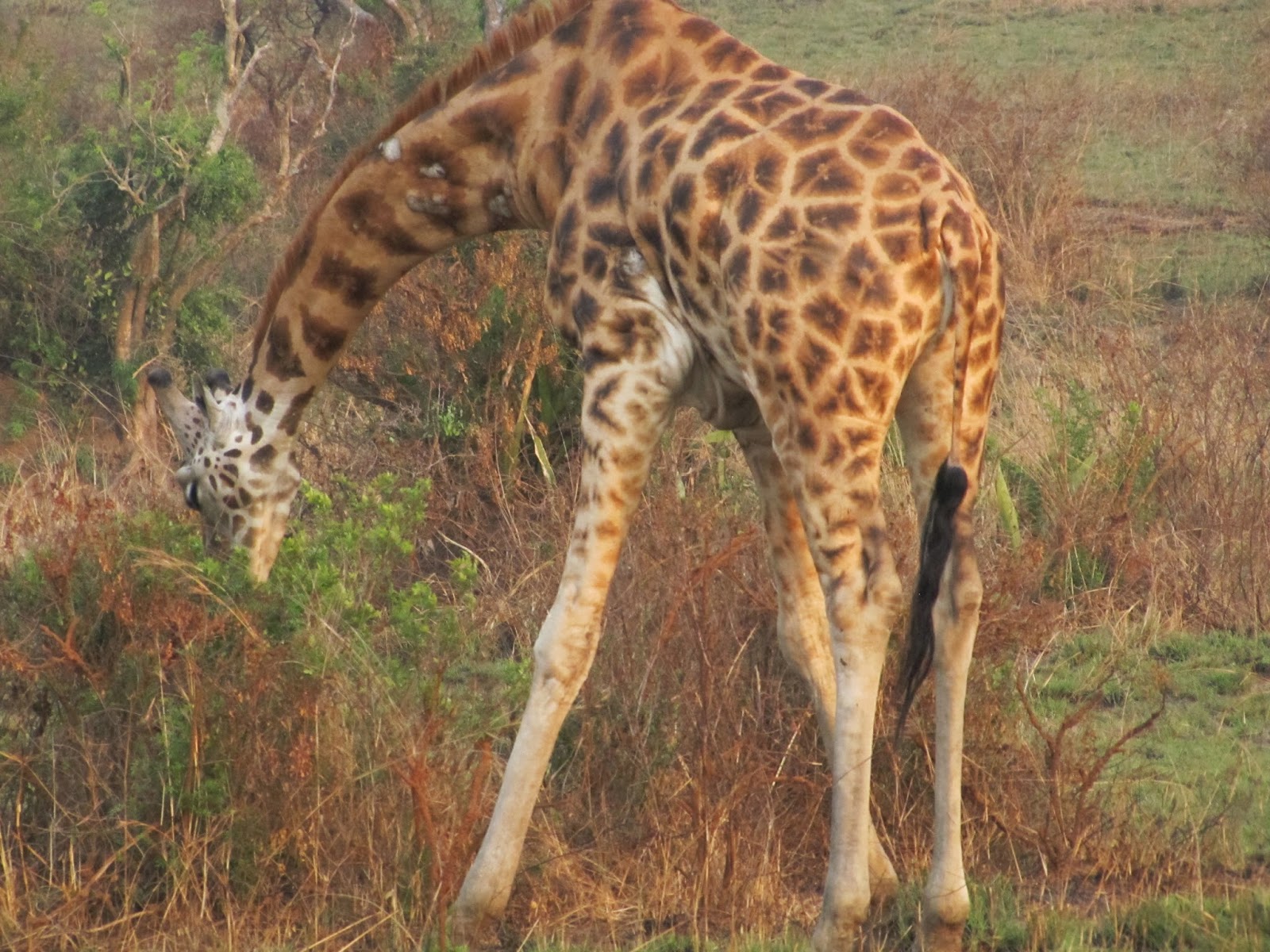