Every Little Thing Gonna Be All Right


As I've said before, I really love driving.  A lot.  And I've not yet hired a driver.  Partly because I have yet to find the right person and partly because I actually really like driving.  Sure it's stressful here, but it's liberating and fun at the same time.

So today when I needed to meet a group going to Ngamba Island to see a chimpanzee conservation project at the Entebbe Wildlife Center, I was excited for my first real drive out of the city.  I was a little apprehensive about getting the right road out of town and left quite early to avoid traffic heading out of the city.

The drive was easy and pleasant, and the roads were clear.  I made it to Entebbe with plenty of time to spare.  I thought I drove by the turn off to the wildlife center, so I looked for a place to turn around.  There were about three cars behind me.  I spied a gas station up ahead on the right and proceeded to turn.  I put on my turn signal.  I know there was nobody coming in the opposite direction.  The cars behind me were all slowing for me to be able to turn.

I turned.  And as I was halfway into the gas station's entrance, I saw a blur of yellow on my right and - in slow motion - I watched a box truck plow into my side of the car and crumple my entire front fender.  Stunned, I just sort of stopped and watched in shock as the truck - just a few second ago so eager to continue towards the airport - hurriedly turn around and take off in the opposite direction.  I was still in "oh my god did that really just happen?" mode and turned off the car, got out, and asked the bystanders whether it was my fault.  They all shook their heads adamantly and said no.  Then they said I should have signaled, maybe that would have stopped him.  I am pretty positive I did.  I always do.  The truck had come out of nowhere and decided to pass four cars on a two-lane road.  By the time he realized I was turning it was too late.

As the crowd grew around me, I finally realized that I had been in a car accident and that I was unscathed.  No bruises, no scrapes, no cuts, no whiplash.  I called the Embassy and reported what had happened, still a little bit in shock.  Then I called a friend who could help put a chain in motion of help.  I started crying while on the phone with him and didn't stop for about an hour.  The phone calls kept coming, people checking in to see how I was, whether I was safe, ask what I needed.  I couldn't stop crying, out of anger and shock and embarrassment more than anything else.  The bystanders had written down the truck's number plate.  They helped me move the car farther onto the property in a safe place and pick up the scattered pieces that might be vital for repairs later on.  I entertained the thought of just loading all the parts into the car and driving to the wildlife center to catch the boat.  After all, the car seemed mechanically sound.  (That was my first impulse the only other time I've ever been in an accident too, when I hit a tree driving down our icy dirt road and totaled my beloved Saab.  I was fine then, too.)

Instead I waited in the car, reading a travel book, until help arrived.  A quick assessment of the damage and it was decided the car could be driven back to the garage in Kampala, 40 km away.  I felt calm enough to drive again.  My colleague removed the crumpled fender and jerry-rigged the broken parts enough to drive the car.  We waited for the police to come, but they never did.  Instead, amazing me beyond belief, the owner of the truck came.  He had heard about the accident - whether from the driver or a bystander who knew him, I don't know - and he came to make sure I was okay, apologize for his driver, and to offer to pay for repairs.  This floored me.  He didn't have to do this.  Many people wouldn't.  But he did, and he was sincere.  And I am grateful for that.  It's not about the money, though that's helpful.  It's about the compassion and responsibility and business ethics.

The drive back was slow but only slightly nerve-wracking.  I put in Bob Marley's Legend, one of my favorite albums, and sang along.  The steering alignment was off, the car was a bit shaky, and there was quite a bit of screeching noises.  But I made it, thanks to my wonderful colleague escorting me.  Traffic was awful by then, but we still made it.  A friend met me at the garage, where we took pictures of the car and I finally breathed a sigh of relief and laughed about it.  We ran errands and had a normal Saturday.  I came home and cuddled my cats and started to decompress.  I tried to nap but my mind kept running through things.  Why hadn't the airbag deployed?  What if I had realized that I hadn't actually missed the turn, that it was still ahead?  Will my car look as good once it's fixed?  I finally got up and invited friends over for a movie fest.  They brought dinner and snacks and we had a great evening of normality.  A great end to an eventful day.

When I looked at the calendar late this evening I realized that one year ago today I walked into my mom's hospital room, hours before she had surgery for a brain aneurysm.  There's something about late January, apparently.  But both these misfortunes ended well, which is as much as anyone could ask for.  And as for the chimpanzees, I'll see them another day. 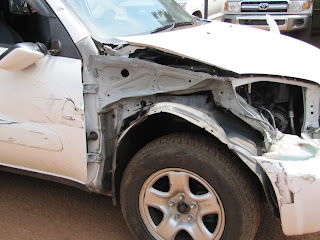