Greece is a pretty wonderful place. I look forward to coming back and exploring it more indepthly on future trips. Quick recap: I didn't find peace and solace on Santorini, but I liked Athens much more than I expected to. (Initially I wrote this as two posts, but I'm going to move Athens to its own post since there are so many photos for both.)

Wednesday's Santorini stop was our longest and earliest thus far. The cruise ships remain adrift during the day, so it's up to tenders to bring passengers to and from the ports. The first tenders took those of us on excursions to the Athinios port, while passengers on their own went to Fira port and took the cable car up to the city. I was on the first bus to depart and was the first passenger off the cruise ship this morning! There has to be some sort of prize, right?

We met our guide and driver and took off for the south of the island and the archaeological site of Akrotiri, inhabited by Minoans during the Bronze Age in roughly 1300 BC. The city was abandoned shortly after an earthquake and right before a volcanic eruption that buried the city in ash. Amazingly, no human remains have been found there, nor livestock. I did read about a pig that was strung up, probably ready to be butchered. But the livestock seemed to make it out. This is a relatively newly-discovered site, with excavations only since 1967. It's a marvel of preservation and engineering, as the entire city (as of its current excavation) is covered by a building and a bioclimatic roof to protect visitors and archaeologists (and presumably the artifacts) from the sun. Visitors meander through the building on elevated walkways, and there are numerous areas where bus groups can gather and listen to the guide without impeding the movement of others. I was pretty impressed by the organization, and I enjoyed seeing archaeologists hard at work on various areas of the site.

After Akrotiri we headed to the center of the island and its capital, Fira. Fira's population doubles in summer, and it's a very popular tourist town. The hordes here crowding the streets and overwhelming the vistas made me a bit crazy. I'd only come back off season. The walk up the hill to the Orthodox cathedral was worth it for the gorgeous views of the entire caldera, most of it now covered in water, and the outlying islands, one of them an active volcano with five craters. I stopped for a baklava, which was divine. This is the baklava I grew up with, drenched in honey and with not a trace of rosewater or semolina or other grains. I adore it.

The next stop was the picturesque town of Oia (ee-ah) in the north. We took the long way there on the island's east coast, getting to see the less-inhabited areas and the flats where farming takes place. Tomatoes, watermelons, and pistachios are main crops, and I loved seeing the pistachio trees in every field and backyard.

Oia sits atop a hill and is a typical blue-and-white village, much photographed by tourists, especially at sunset. Many of the homes/buildings started out as cave dwellings carved out of the soft pumice stone layer that tops most of Santorini. These evolved into the arched and domed buildings we all associate with Greece today. I think in the off season I could love Oia, but today was not that day. I managed to escape from the chaos a little bit during lunch, where I dined on spanikopita and vegetarian moussaka while admiring the view. I didn't get any photographs, but a couple lines of donkeys came trotting down the steps next to the restaurant, thankfully not laden with tourists. Donkeys are often used for transport, though the practice is frowned on by animal rights activists. I was glad these guys were unburdened.

The last stop on Santorini was Santo Winery for tastings and a sampling of local delicacies. I opted not to try the meatballs after my innocent question of "what kind of meat?" was answered by three different people simultaneously as beef, lamb, and pork. All righty. Olives, cheese, and tomatoes for me! Oh, and capers, which I don't usually like, but these were quite tasty.

We made it back to the port and onto the tender about 4:00, and we pulled up to the ship at about 4:05. I made it onto the ship just after 5:00. What a traffic jam of tenders! It wouldn't have been so bad except I was inside, where it was hot without a breeze, and the exhaust fumes were sickening. I have never been happier to be off a boat! 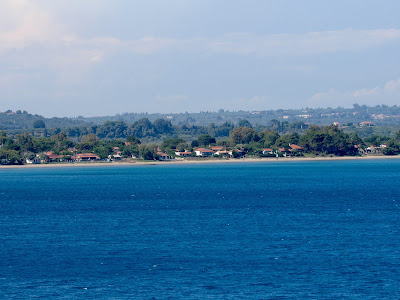 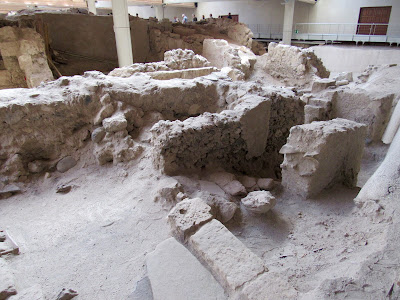 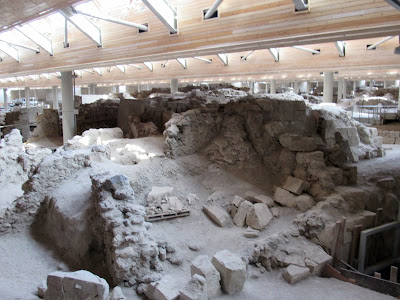 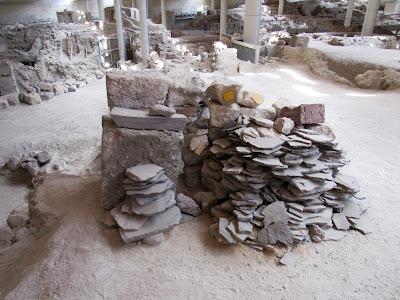 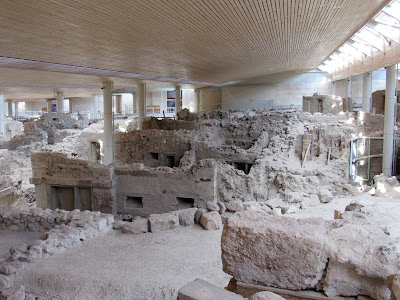 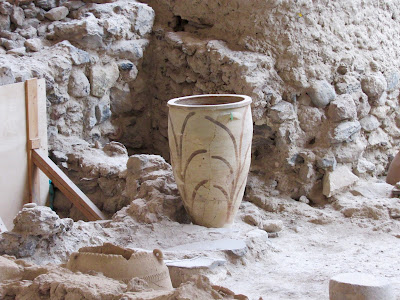 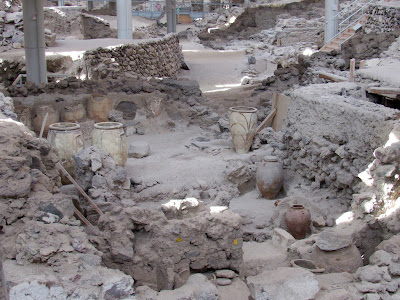 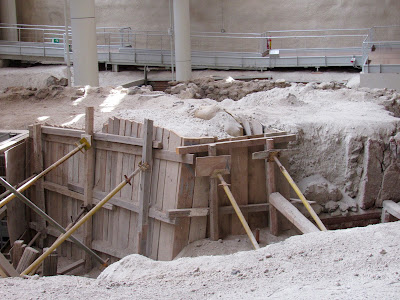 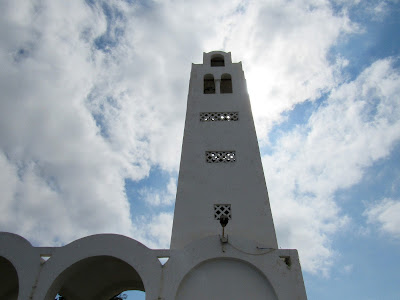 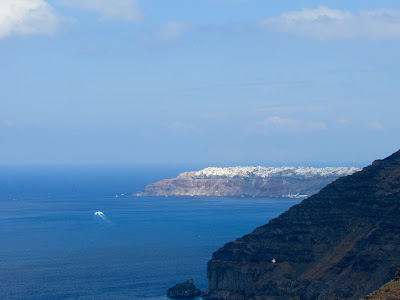 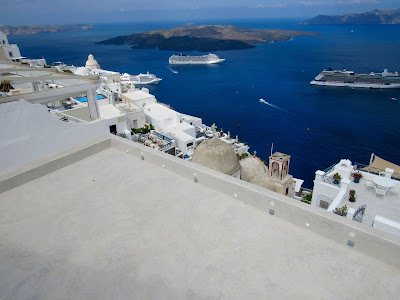 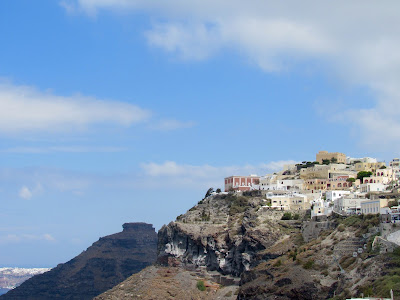 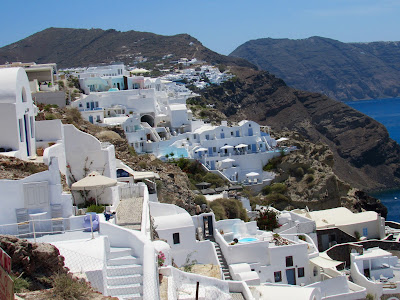 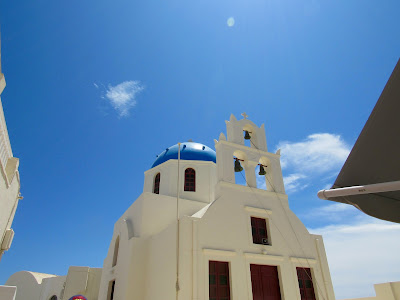 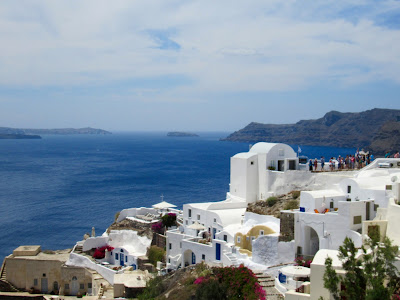 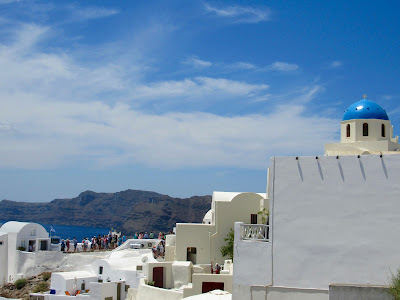 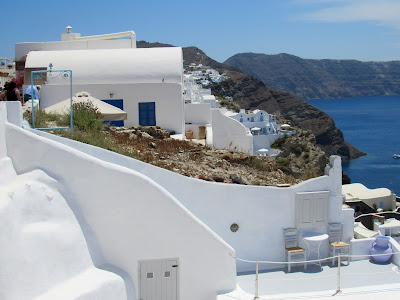 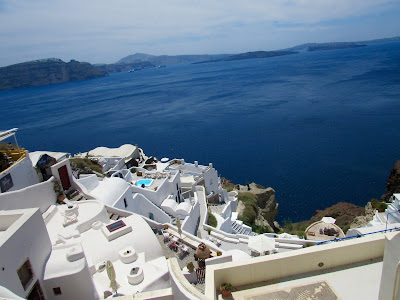 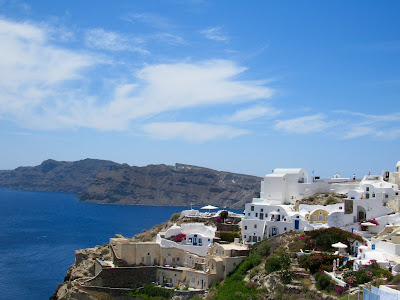 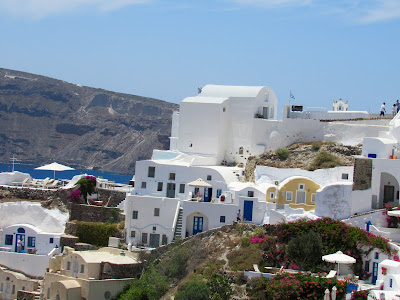 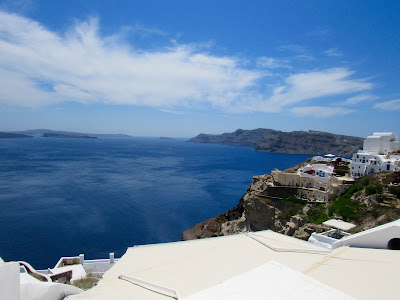 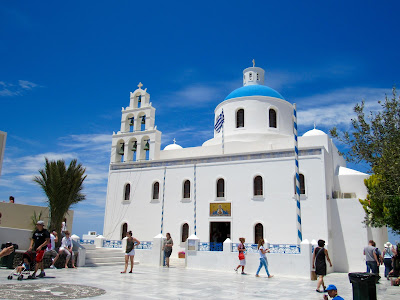 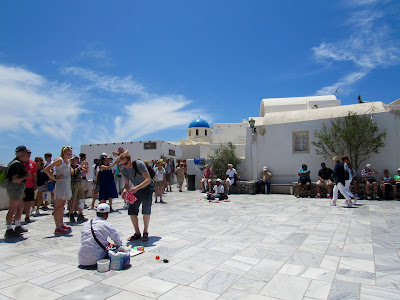 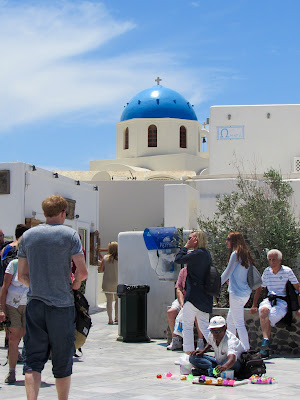 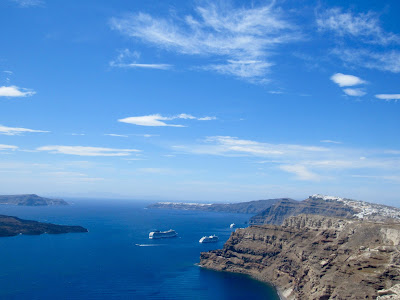 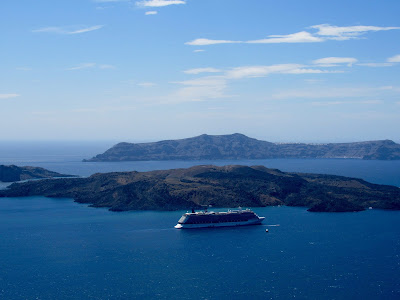 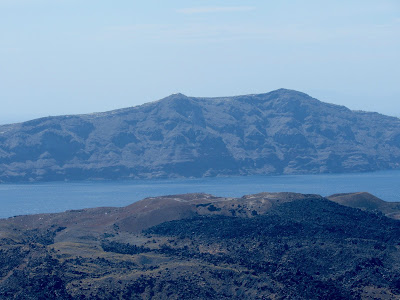