We woke early the next morning and walked to the main lodge while it was still quite dark. We gathered food from the breakfast buffet and sat down at an outdoor table to eat. As the sun came up we got to see the abundance of birds and animals sharing breakfast with us. Several types of hornbills hovered nearby, competing with the starlings for crumbs when they got their courage up to swoop in. Several hares jumped about in the brush. Dassies (rock hyrax) ran across the roof of the building. And there were several absolutely adorable dik diks, small antelope. Such fun!

After the breakfast game viewing we loaded into the vehicle, armed with a game plan on setting boundaries and expectations and determined not to let the previous day's frustrations with our guide repeat themselves. And, for the most part, it was a splendid day.

The sun was still slowly rising, and we saw a lot of antelopes and gazelles as we made our way from the more sheltered brushlands near the lodge to the open savannah. We happened across some hyenas guarding their den, the cubs barely visible through the tall grass. We drove on, encountering several giraffes, including one of the darkest males I've ever seen. A beautiful secretary bird posed for us, and then we came to a dry riverbed. Our guide turned off the car, but it took a couple minutes to figure out why we were stopping. Lions! Seven of them! There was a mature female with a tracking collar, two young males, two other females, and two cubs. We watched them for a while, but with the exception of one of the cubs they really weren't that active. (The problem with writing this post more than a year after the safari is that my memory is not as fresh. There may have been more than seven lions here. We saw a total of 36 in the Serengeti - spoiler alert! - but I can't remember how many at each time.)

Soon after leaving our first pride we spied a lion in a tree, surprising us since this isn't normal in the Serengeti (though the guide says it's not uncommon either). She seemed to be the huntress for a pride with young cubs. We could see activity in the distance, and the guide said it looked like there were a few other females and some young cubs, but it was too far to get a good look. Once we realized she was in the tree for the long haul we moved on.

We encountered a few elephants, our first of the day, and then started seeing a flurry of other vehicles speeding towards a clearing a little ways away. Chatter on the radio indicated a predator of some sort, maybe a leopard. We made our way there and were dismayed to see a crowd of vehicles already there. We pulled into the scrum and found a vantage point, and D spotted the leopard first with her binoculars. It made its way into the open and posed quite nicely, even with dozens of onlookers. Then it started to move towards a tree. I was watching and taking photos as it climbed, a magnificent thing to watch. And just then another truck pulled right in front of us, in breach of all safari etiquette. As we watched the leopard rest in the tree we counted the vehicles. More than 40. All watching the same thing. UGH.

But we didn't leave. We repositioned (without disturbing anyone else's view) and watched. Because this leopard was clearly hunting. And there was plenty of prey around. Gazelles, zebra, even elephants. Over the next hour we watched with 100 of our closest friends as she came down from the tree, stalked, hid, repositioned, stalked again, and then finally walked off empty handed (pawed? clawed?). The gazelles were within feet of her. All forty vehicles gave up at about the same time and headed for a nearby rest stop, complete with a bathroom and picnic tables and even a snack truck. I was impressed! The bathrooms were spotless and attended to by a man who was cheery and upbeat and attentive and made sure there was always water for flushing, toilet paper, and plenty of soap. He earned those tips! It was still early but we sat down and ate lunch since we were there. The starlings and some bees were intently begging for scraps but we were otherwise unbothered.

After that, thankfully, the vehicles all dispersed, and we didn't have to share our experiences with more than a couple vehicles at any time for the rest of the Serengeti. The first major sighting was two more lions on the prowl, a male and female this time. They were covering ground fairly quickly and weren't bothered by our presence. After a while they rested, the male lying down and the female on a mound of grass surveying the savannah. We pressed on, soaking up the views and wonderful animal encounters. 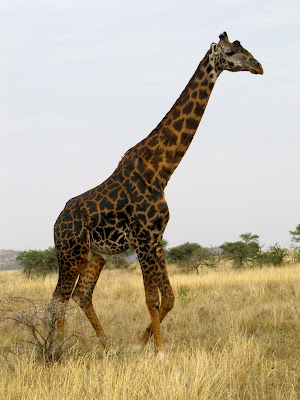 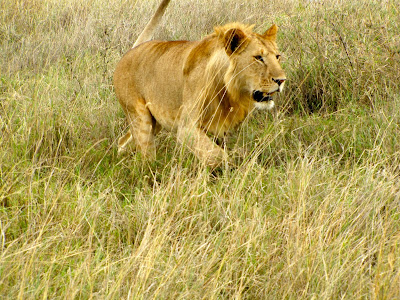