Today was a rainy day without much other redemption. I know the park and its animals and people needed the rain, but it did put a bit of a damper on my vacation, even if I knew it was coming. I think what did it was that I was expecting a thunderstorm with a few hours of rain, so when I woke up at 5:30 to find it had rained all night and was still pouring I was a bit disheartened. I told the morning guard when he knocked that I would not safari this morning and that I'd have breakfast at 9:30. I'm sure all were relieved not to have to do anything early in this weather. I didn't sleep soundly after that but dozed on and off until 9:00.

I had a cooked breakfast today and lingered over a few cups of tea before retiring to the library to curl up in a comfy chair and read. I did this until the rain started to let up around 11:30 and then took a short nap before lunch. I stayed at the main lodge until it was time to go on our drive and enjoyed the downtime and the much cooler air.

The drive didn't result in great sightings of anything except impala, and it sadly broke my streak of having seen a leopard on every drive. We did see more giraffes today than all previous days, and at much closer range. We stuck mainly to the main roads to avoid flooding and getting stuck in the mud, which definitely limited our viewing, especially since the animals had dispersed to the now full waterholes and streams around the park. Still, I didn't want to get stuck so didn't push this.

Birds were out en masse, eating insects and frogs and other delicacies from the puddles and streams. We saw lots of ibis, a few storks, plenty of guinea fowl, plovers, hornbills, and much more. We even saw two juvenile Bateleur eagles roosting in a tree!

Once the sun went down we strayed a bit from the main roads on hard-packed sand roads and tried to find some hunting cats, but to no avail. Our two big sightings were a crocodile crossing the road, having left the river for a waterhole to spend the rainy season in, and a civet (like a raccoon) foraging. He didn't pose for pictures, though. The crocodile slightly indulged me even as it lumbered away from the lights.

Upon return to the lodge I discovered that they'd set up a table on my chalet's porch for my dinner. It was lovely! I dined by candlelight, listening to the birds and frogs and baboons and watching the impalas walk by and munch on new grass. There's a perfect tree for a leopard right next to my porch, and every morning I wake up and open the curtains hoping to find one there. And then I started thinking about what I would do if a leopard came up right now. I had several ideas, most of them involving wielding the candles as weapons and rushing to the door. Sadly (?) these solutions were not needed. And now I need to shower and get to sleep before another hopefully action-packed day tomorrow. 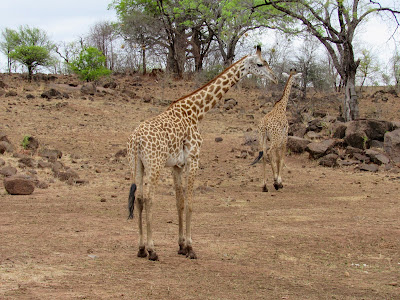 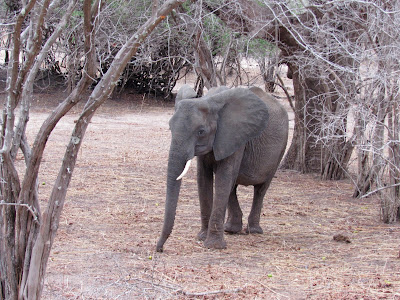 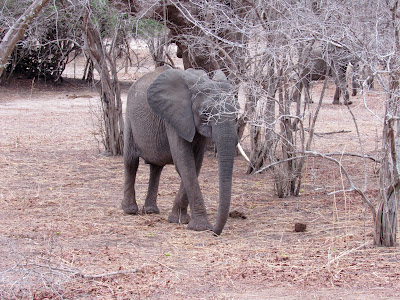 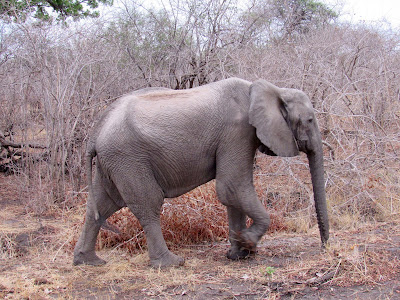 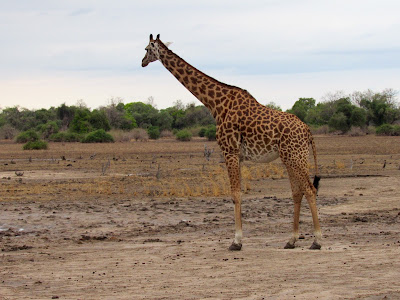 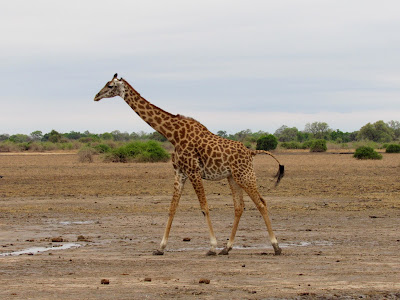 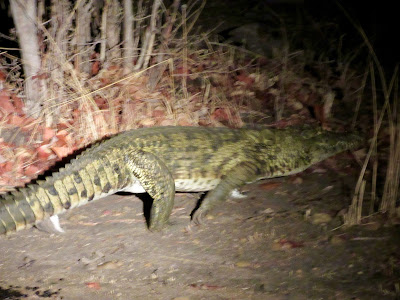