Day two of our epic Kidepo Valley National Park safari weekend was pretty darn awesome.  While I didn't sleep well, thanks to a combination of being dive bombed by beetles who found a way inside my mosquito netting and waiting for an email that didn't come for another two weeks (tenure, I got it!), I woke up excited and raring to go.

Early morning game drives are apparently not that popular at Apoka, so we set off about 7:00 after a cup of tea/coffee and a muffin.  Our first sightings were of giraffes and various antelope grazing on the hills.  Then our guide said he thought he knew where some lions might be, so we took off in that direction.  Sure, enough we came upon a pile of lions.  Literally.  These five adolescents - four males and a female - are cousins between 1-3 years old who have been abandoned by their mothers.  They are clearly not the most successful hunters - their emaciated figures were hard to stomach.  We turned off the engine and sat next to them for about 20 minutes, only a couple meters away.

They were all sleeping in the hot sun, unbothered by our presence.  Eventually the female - the healthiest looking of the group - got up, stretched, and walked over to sleep under a nearby tree.  Two of the males followed us, all completely ignoring us.  I could have watched them all day, but it was time to move on.

We set off in search of elephants.  Apparently a week earlier there had been large herds of elephants throughout the park, but the recent arrival of rain meant they were able to forage further afield, so many had headed to South Sudan.  Such a funny concept, but this was repeated throughout the weekend.

Our guide knew of a small herd that was still hanging around, so we drove towards where they had last been seen.  It was mid-morning by now, and most animals were sleeping or hiding in the shade.  We saw some great birds and large herds of buffalo and several large euphorbia trees.  Finally our guide spotted the elephants and pointed them out.  None of us saw them.  We went closer.  And there, hiding in a grove a trees ahead, was indeed a herd of elephants.  None of them were particularly large, but it was still amazing how well they blended into the forest.

We watched them graze for a while and then drove a short way to a tree where our guides unpacked coffee and tea and cookies.  Lovely mid-morning snack!  We had been out for about three hours by then and were getting peckish.  We slowly made our way back to the lodge and had a hearty breakfast - eggs benedict for me! - and then had some time to relax.  I went back to my cabin for a little while but spent most of the time on one of the main building's comfy couches watching the grazing animals visit the watering hole.

We ate lunch only a couple hours later and then headed out for an afternoon drive.  We were on the hunt for leopards and cheetahs and were still on highs from the morning's successful sightings, so there was lots of laughter and joking in between sightings.  We drove to the bottom of an escarpment where we were surprised to see a giant building at the top.  It was apparently a resort in the Idi Amin era and had fallen into disrepair.  A recent effort to revive the building had started, the the roof having been recently replaced.  We decided to check it out the next day and continued our predator hunt.

We didn't find leopards or cheetahs, but we found more ellies and then a gorgeous female lion sitting on a termite mound surveying her land.  Upon learning that only the male lions are given names, we decided that just wasn't right and spent a long time trying to decide on a name that befit her elegance.  We decided on Shaniqua, which our guides found hilarious.  But we spent a good 45 minutes watching Shaniqua identify a small group of buffalo, who didn't see her and kept coming closer.  We watched her slip off her perch and silently and almost invisibly stalk through the tall grass.  She mis-timed her attack, and the buffalos went running, but our adrenaline was going strong after almost witnessing a kill.  Our guides broke out the sundowners - G&Ts and soft drinks - and we watched Shaniqua move on to better hunting grounds.

We watched the gorgeous sunset as we drove back to the lodge, where a scrumptious dinner awaited us.  We told stories of the day and safaris past and relaxed around the lovely table.  The staff escorted us back to our cabins so we wouldn't encounter a hungry lion or angry buffalo, and we settled in for the night. 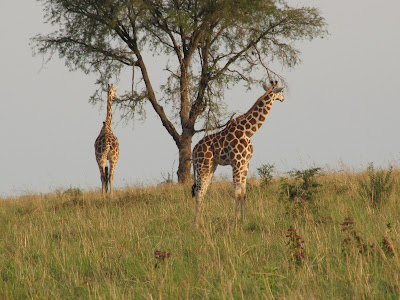 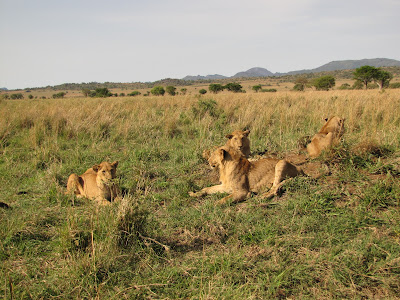 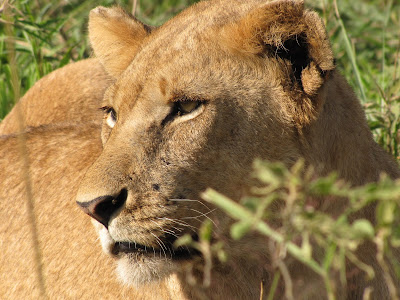 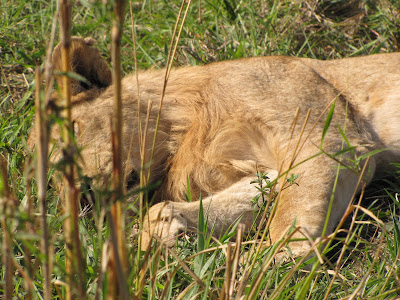 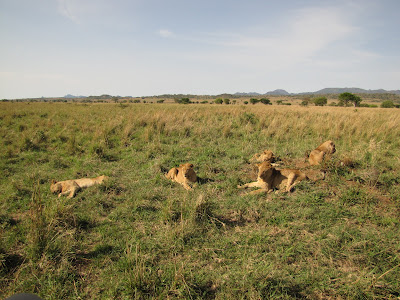 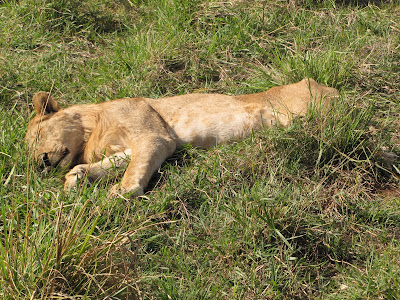 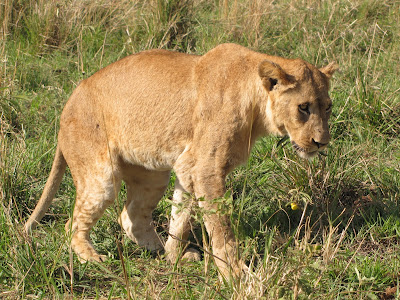 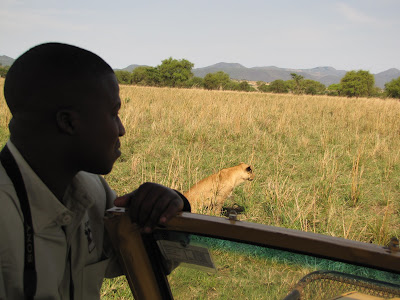 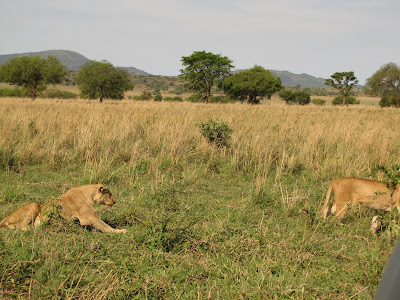 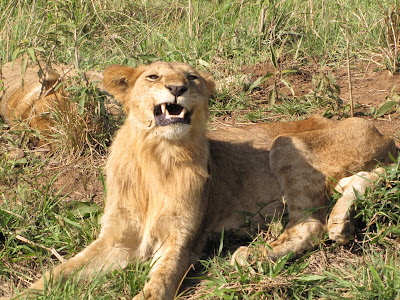 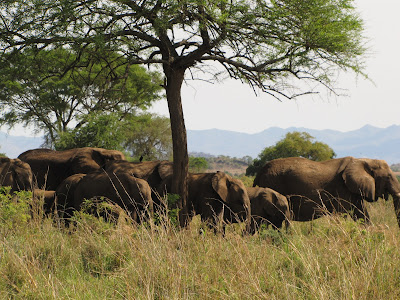 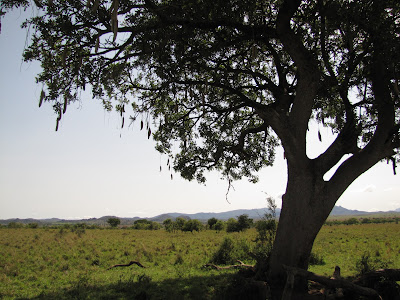 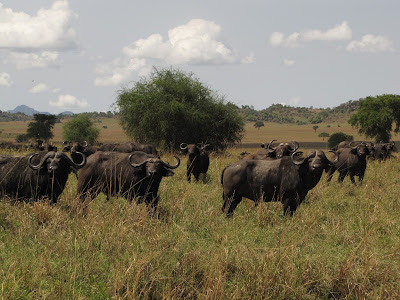 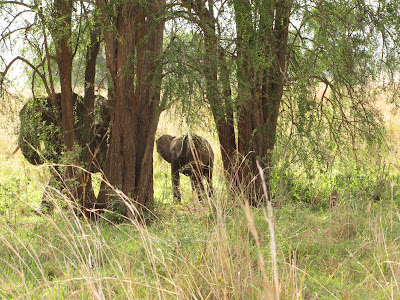 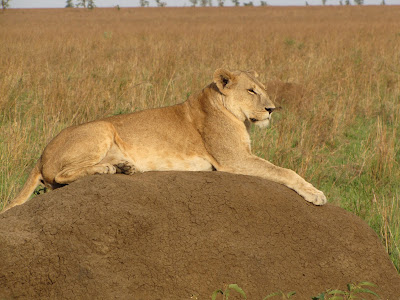 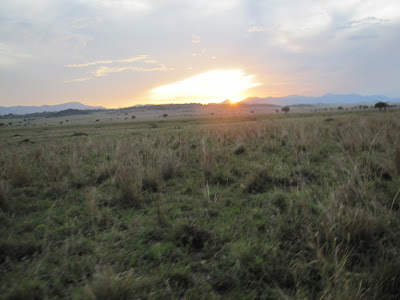