I'm taking advantage of fast internet speeds to upload the rest of the photos from my Selous safari.

We woke up early on Thanksgiving, had a very quick breakfast, and then met our driver for the ride to the airport.  We arrived much earlier than anticipated and had to wait a while to check in.  We amused ourselves by watching several families of tiny birds as they nested in the ductwork of the airport.  There was lots of feeding of baby birds and a few territorial fights.  Fascinating stuff.

Our plane was a thirteen seat Cessna, and the fifteen minute flight to Dar was blissfully uneventful.  We deplaned there so they could refuel and met up with our friend T who was going to Selous with us.  Finally we reboarded the same plane for the 45 minute flight to Selous.  There was a tiny rainstorm that we passed through, but the plane did great (or, rather, the pilot did).  As we descended into Selous we saw pods of hippos lazing in the waters of the Rufiji River - so cool!

We were met at the airstrip by a contingent from our lodge - Mivumo River Lodge, a Serena property.  This was the start of four days of ensuring our every whim was catered to.  We loaded into a beautiful open safari vehicle - with only four seats! - and started off for the lodge, about 30 minutes away.  We didn't see a lot of game on the drive, just a few elephants from a distance and a mongoose or two.  The terrain was hilly and densely forested, thanks to the arrival of the short rains just a few weeks before.

Arriving at Mivumo was lovely - they had a staircase to help us down from the vehicle - something I've never seen in all my years of safari but oh so practical!  We had cool towels and fresh orange juice before being escorted to our cabins.  The arrival area at the lodge is about 70 wooden platforms up from the level of the dining room and cabins.  Access to all the buildings was along this lovely boardwalk - up and down and up and down and up and down.  It made for great exercise just walking to and from meals and the vehicles!

Each cabin is extremely spacious with a comfy king bed, a lounge area with a comfy chair and chaise longue, a writing area, several wardrobes, and a large bathroom.  The bathroom has a toilet, claw foot tub, and double sink.  The private terrace outside was home to a plunge pool, an outdoor shower, and a table and chairs.  Not only did the rooms have A/C and a fan, but there was a fridge with all drinks included.  Such a luxury!

After a little while to settle in we headed up to lunch, which was typical Serena three+ course excellency.  The dining tables overlooked hippo pools, and we spotted (and heard) several pods.

After lunch we walked down to the living room area and relaxed in comfy couches while watching the river.  We spotted a lump on the beach and, with the help of binoculars confirmed it was a crocodile.  As we watched we started noticing more and more lumps.  Before long we realized there were upwards of a dozen visible crocs on that one stretch of beach.  Crikey!

At four pm we headed down to said beach to board our boat for an afternoon river safari.  We saw tons (literally - they were huge!) of crocs and hippos, a fair amount of birds, and quite a few dassies (rock hyrax) along the banks.  The crocs were pretty skittish - as soon as we would get close they'd slide down the banks of sand or clamber down rocks back into the water.  Quite a sight to see these giant reptiles running from a tiny boat.

The weather was perfect, the boat was a great design for this purpose, and we had a lovely time on the river.  We wound through Stiegler's Gorge and encountered a few very tiny rapids before turning around.  Some of the crocs that had fled from us as we came through the first time had returned to their perches, only to flee again when we went by a second time.  Seeing a giant crocodile slide down a sand bank is truly a phenomenal sight.  We couldn't stop laughing!

We did go past our cabins from the river side and realized that the afternoon boat ride time is not an ideal time to take an outdoor shower.  Noted.

We returned to the lodge about 6:30 pm and hung out on the couches until dinnertime, sated by unending supplies of drinks, warm cashews, and samosas.  Dinner was lovely, and we were exhausted by the time it was over.

I took a blissful outdoor shower before bed, accompanied by the grunts of hippos and the shrieks of the dassies.  The bed was comfortable, the A/C divine.  My only complaint was the lack of mosquito netting, which meant more than a few beetles and flies divebombed me as I tried to read.  As soon as the light went out they were gone, though, and I slept wonderfully. 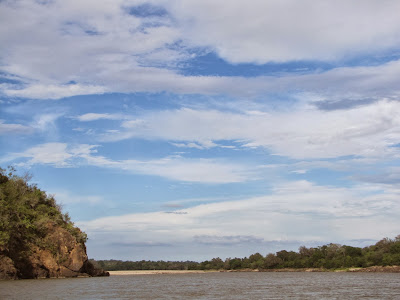 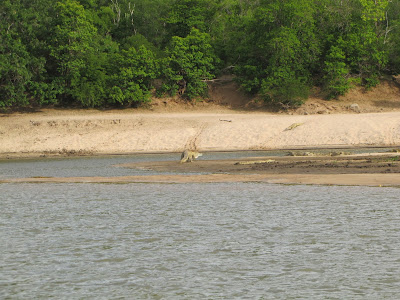 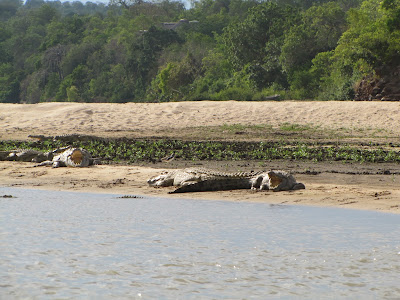 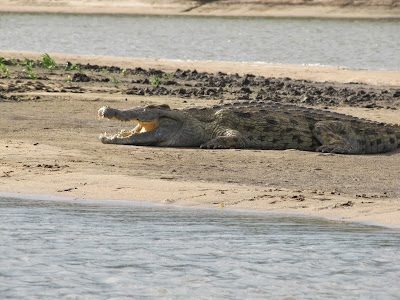 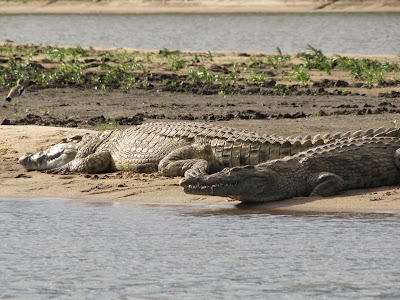 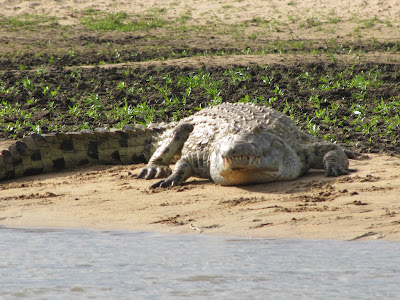 Home for the Holidays

Last week was not a good week.  Not only was I suffering from something flu-like and virulent, but work was chaos.  And not in any semblance of a good way.  I went into work Monday, Tuesday, and Wednesday with the intention of leaving as soon as I could get a few things done.  I did manage to leave at 4:25 on Tuesday.  This is not a work blog, but if you are at all worldly you probably have a few guesses why things were so darn chaotic.  Take the last full week of work before a major holiday consular mode and add in a little regional instability.

Anyway, I am actually lucky I was able to leave when I did and thank my amazing boss and colleagues for picking up the slack (we have a small office, so one person's absence is really felt) for being able to fly on time.  Granted I spent the hours before my flight at the airport working, but still.

The flights were not too bad.  I used miles to upgrade to business on the way to Amsterdam and had economy comfort on the way to Boston, but when you're not feeling well nothing makes a 34 hour journey feel much better.  I lie a little - business class really does take some of the sting out of it.

I opted for a pricey chair massage in Amsterdam at 7 in the morning, which was totally worth it.  I managed to keep my coughing a bit in check and therefore not entirely terrify my fellow passengers.  I felt bad about being that passenger, but there wasn't much I could do about it aside from continue to pop cold pills.

By the time I landed in Boston on Saturday afternoon I was about at the end of my rope.  I didn't want to travel anymore.  I just wanted to sleep.  Horizontally.  My bus was, of course, full so I couldn't stretch out.  I think I slept/dozed for about 3-4 hours on each flight, but I was still pretty exhausted.

It was a lovely reunion at the bus stop with Mom and Grandma, even if they didn't see me for the first few minutes and I finally had to wave my arms and shout to get their attention.  It had been almost fourteen months, in their defense.

I made it through almost two full hours at home before finally collapsing into the blissful sleep that inevitably follows a long journey.  Thirteen hours later I woke up, snacked on Christmas cookies, and headed into town.  I was able to readjust to driving both a standard and on the wrong (right) side of the road with a minimum of issues (I mean, really, why aren't turn signals and windshield wiper controls on the same side all the time) and caught up with a few friends as I browsed a few stores.

Did you know that tape now comes in dozens of colors and patterns?  I did not.  And I spent about 20 minutes staring at this display in Staples just marveling.  Wow.  I was both horrified and exceedingly excited.  I only bought a couple options but may go back for more.  I never knew I was missing this...

We put up the tree and filled its skirt to the brim with presents and listened to Christmas music.  I love these traditions.  Mom, Grandma, and I went out to see all the local light displays last night, a fun tradition that never gets old, even though the nieces/nephews couldn't make it.  I stayed up till nine pm and then promptly fell asleep for another 12 hours.  And woke up sicker than ever.

I don't have the same body aches and sore throat that accompanied the first week or so of this illness, but my symptoms are now hovering between pertussis and pneumonia but not falling solidly into either camp.  It's not bad enough to go to the doctor on Christmas Eve Eve, but I'm definitely moving slowly today.

In the meantime I'm watching lots of Netflix on my iPad (amazing what fast internet can do!!), eating bratwurst, and enjoying unlimited carbonation in my new SodaStream for home.  Tomorrow the family celebrations will start in earnest, and I can't wait.  I hope everyone else is having a wonderful holiday so far, wherever in the world you might be.
Posted by Sadie at 5:19 PM 1 comment: