In late February a group of colleagues and I were standing around during a workshop break and making predictions on the likelihood of being evacuated from post due to COVID-19.  We all said we thought it was over 50% at that point (with no confirmed cases in Indonesia), but I am not sure any of us really thought it would come to pass.

March was the longest and shortest month of my life.  I think that's true across the globe.  My team was phenomenal adapting to the daily (or multiple times daily) changes.  My colleagues were amazing to work with on contingency planning and crisis preparedness.  My heart swelled with pride daily.  But I was mentally and physically exhausted.

Mid-March was when things went into hyperdrive.  Monday after the Department of State announced the global authorized departure (GAD) I was still thinking we'd stick it out.  Tuesday morning I was leaning a little more towards leaving.  Tuesday afternoon I was 75% leaving.  Wednesday morning I made the decision to leave.  On Monday.  I'm glad I had the time to make a decision, as Indonesia moved to ordered departure for all EFMs under 21 a few days later, which would have forced my hand.  As it was we had a decent flight routing and a few days to prepare.

Those next few days were full of tears and second-guessing and packing and prepping and reassuring friends and colleagues and domestic staff that we'd return.  The abrupt nature of things meant very little opportunity for closure with friends and colleagues who were PCSing this summer but now leaving in the same week as us.  We thought we had a few months left, not days.  That was - and still is - hard.

I should also say that I am 90% sure J and I had COVID-19 in January when I was sick for almost a month with fever, cough, shortness of breath.  He had a much shorter course of the same.  I tested negative for flu and strep.  A chest x-ray at the very end showed bronchitis.  Nebulizers and an inhaler helped us both.  It was only in the final days of that illness that coronavirus was really making the news.  We eagerly await an antibody test.

We flew from Surabaya to Jakarta.  Stayed overnight in a hotel.  Had a 6:30am flight to Tokyo, then a short layover and a direct flight to Boston.  Airports were empty.  Our flights were fuller than expected but we still had a middle row to ourselves on the long flights.  My parents met us in Boston and drove us to our new hotel home in NH for the time being.  We decided before arriving that our social isolation circle had to include my parents because I still needed to work and needed help with J.

It hasn't been easy, but it has been fine.  We made it through 14 days without symptoms so know we didn't bring the virus with us.  Now we isolate to not get it locally.

J is amazingly resilient.  He has his moments, but he is also two years old.  He's an even pickier eater than usual and is slightly more prone to tantrums, but it's hard to know what's developmental and what's adjustment.  We video chat often with his BFF and weekly with his teachers and some classmates.  We send daily updates to his nannies.  He goes for nature walks with my mom.  Does art with my dad.  Is getting more acquainted than I'd envisioned with AppleTV, but desperate times...  He sleeps through the night and is mostly agreeable and has a great sense of humor and can occupy himself for hours with trucks and legos.  I get kisses and cuddles and "I love you Mama!"s throughout the day.  Honestly, I couldn't ask for much more.

We're safe, healthy, nourished, supported.  I continue to work and try to support my team and colleagues still at post as best I can.  We're taking it day by day.  Sometimes hour by hour.  And so thankful for the essential workers keeping us safe, healthy, nourished, and supported. We're all going to get through this together.  I hope you all are well.
Posted by Sadie at 8:17 PM No comments:

We went to Bali for a long weekend last month. We go there regularly, almost always in conjunction with a work trip. This was our first trip just the two of us, just for fun. J kept saying "go airplane to Bali!" for days before we left.

1. We stayed near the beach at a family-friendly resort, though J did NOT want to go in 'the big pool' (the ocean). "Baby no like it," he told me. He thinks his name is Baby. So we hung out in the actual pool and had a smoothie at the swim-up bar. Baby liked that!

2. The day before we left (Thursday), I told J we'd go see turtles and monkeys. Saturday, as we got in the car with our favorite driver/guide, J asked about the monkeys and turtles. We went to the turtle conservation and education center, where he adopted a baby sea turtle to be released. He named her Maya. A week later we got the video of the release, and he watched it over and over. "Bye bye Maya!" We saw monkeys at Uluwatu temple, which he loved. Successful turtle/monkey day.

3. The night we arrived, a huge thunderstorm started after we landed. While waiting for a taxi, there was a very close lightning strike and a huge clap of thunder. All the people around us screamed; we were in an outdoor but covered pavilion. I've been working on making thunder/lightning normal parts of life for J, and I hit on something that stuck that night: we call lightning 'the light show' and now he gets all excited! "Oooh! Another light show!"

4. We had an impromptu photo shoot at our hotel with the resident photography studio. We were sweaty and hot and J wouldn't stop moving to pose, but man were those some awesome photos. That was an unexpected highlight.

5. On our last night we ate at the hotel's Japanese restaurant, where J ordered the very traditional peanut butter sandwich and french fries. While he picked at those, he inhaled the watermelon balls his meal came with. He then proceeded to ask every single waitperson for more melon until a huge plate appeared. He ate all but one piece. (As I write this he is eating watermelon for dinner.)

We love Bali! One of the nice perks of being in Surabaya is proximity to great island getaways.
Posted by Sadie at 8:06 AM No comments:

Let's see if posting just five(ish) thoughts or observations a week helps me get back into blogging... 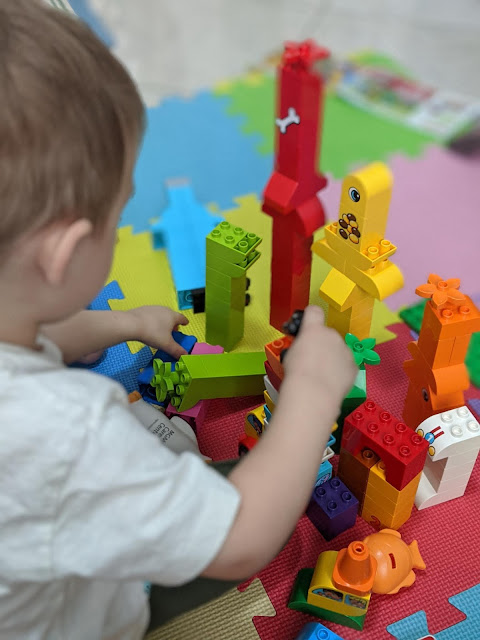