The seas were a bit rough that night, with lots of gentle rocking and rolling the whole night. It felt a little bit like plane turbulence when I was lying down, but it didn't bother me nearly as much as on an airplane. I went to the early showing of a tribute to the musical Grease (pronounced Greeze by the cruise director), which was entertaining but also a little odd. Sandy and Danny sang their parts but with a very clear Italian accent. Rizzo and Teen Angel lip synched, badly, to what I believe was the movie score. I wish they hadn't pretended; the dancing was enough to keep us entertained. My favorite, though, was the glittery sparkle jumpsuits the whole cast wore for Greased Lightning. That's a new take on it! It was a quick run through of most of the songs and no dialogue, given the multilingual audience. Not bad for a Wednesday night.

I have to say I was dreading Athens, considering the Acropolis to be a box to be checked while I experienced traffic, pollution, unrelenting heat, and hordes of tourists. I'm sure Athens can be all of those things at times, but I had a lovely experience. Traffic from the port of Piraeus into Athens was a bit heavy (our guide thought there might be an accident), and we arrived at the Acropolis parking at about 9:00. The sun was not yet too strong, and there was even a breeze. While there were a lot of tour groups, it wasn't nearly as crowded as Santorini because there was so much more space. The walk from the parking to the main entrance was pleasantly cool and under shade, and from there our guide gave us the option of sticking with her or going on our own. I like to take things in and read about them later and go at my own pace, which I happily did.

The main entrance to the top was crowded but also breathtakingly beautiful in the morning sun. The Parthenon was even more striking than I anticipated, even though it was under scaffolding on two sides. The paths were as uneven and slippery as everyone said they'd be, and I spent a lot of time carefully picking my way around, not wanting to be a casualty of the marble. Success! The site is very well set up, with benches in strategic places and toilets and access to the best views of the city. I'm kind of glad my expectations for this site were so low, as I enjoyed it so much more. I want to come back off season to take in more of the details and possibly see more of the Parthenon without scaffolding and cranes (though I know the restorations are vital). I've been studying this site since early childhood, and it was exciting to finally see it in real life.

After a careful, incident-free descent on the marble steps with few handrails, I met back up with the tour group, and we headed for a bus tour of the city. We got out for a photo stop at the Panathenaic Stadium, built in the 4th century BC and restored most recently in 1895 as the site for the first modern Olympic Games. It's the only stadium in the world made entirely of marble and is pretty darn impressive. It holds 60-80,000 people depending on who you ask, and it is still used as the end of the Athens marathon every year, as well as a venue in 2004 for archery.

I enjoyed Athens traffic as we slowly made our way around the center of the city, taking in the Temple of Zeus, the Parliament, Sygmanta, the guards at the tomb of the unknown soldier, the national gardens, and many more sights. I will have to come back to take photographs and explore. I didn't expect the city to be so beautiful and accessible, with metro and tram and bus lines throughout. I don't know where my negative  preconceptions about Athens came from, but I'm glad they've been disspelled.

We had a short time to explore the Plaka, a touristy area across from the Temple of Zeus. I had a delightfully tasty pork souvlaki and bought my magnets. My fridge is going to have a heavy Italy and Greece representation; they do tacky magnets very well here! I spotted a small schnauzer standing outside an antique shop, a stick next to him. He had a collar and a flea collar and either belonged to the shop owner or a customer. I approached him gently, allowing him to sniff my hand, and he bounded over to rub up against my legs. I reached down for his stick, which made him excited to no end. He wanted to play tug-of-war, and once I won the first battle I threw the stick a couple feet away for him. That was just the greatest thing ever in his mind, but I said goodbye and headed down the street. He turned and continued staring into the shop. On my way back down the street he was gone, but it was a sweet interlude.

Getting back on the ship was a breeze, and I had lunch at my choice of tables (for once!) before lying down for a while and reading and getting my feet up. Now I'm typing this as the Greek mainland gets farther and farther away in my balcony view and anticipating getting ready for dinner and a show. We have a late start on Corfu tomorrow, and I'm excited for one last taste of Greece on this trip! 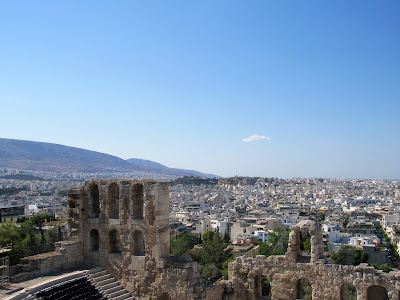 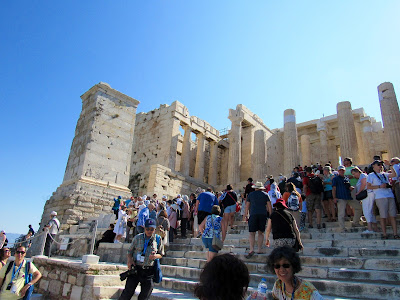 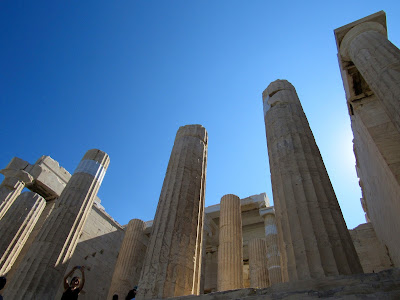 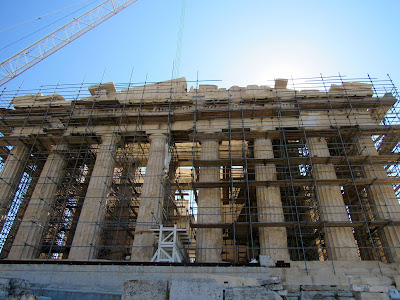 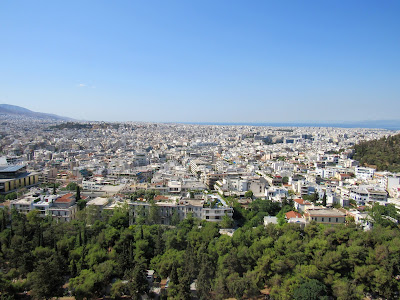 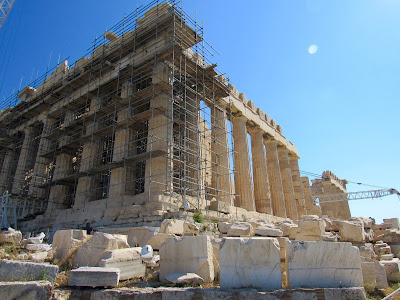 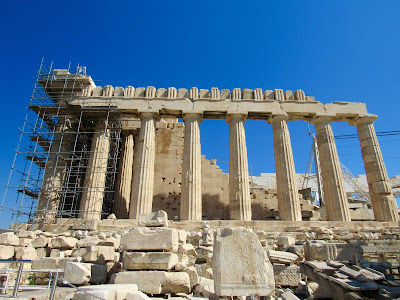 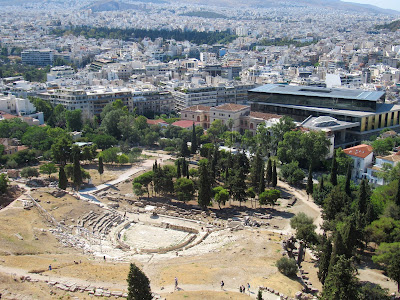 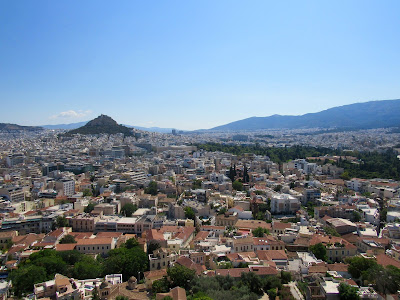 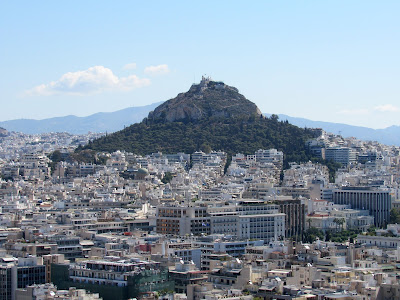 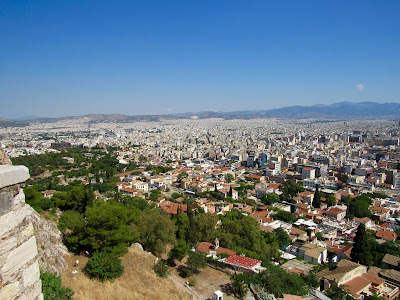 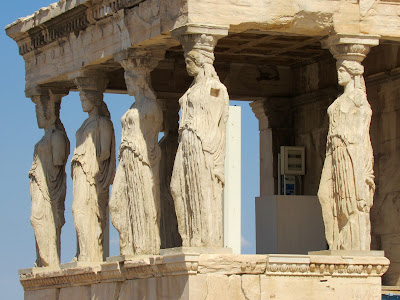 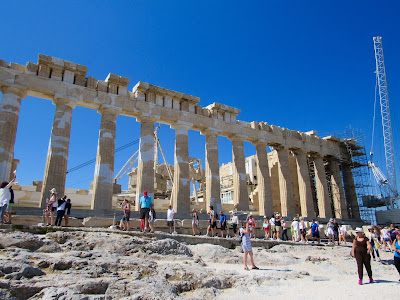 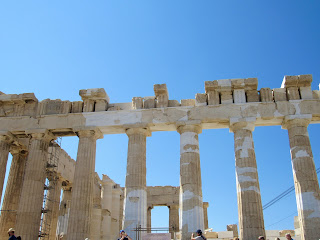 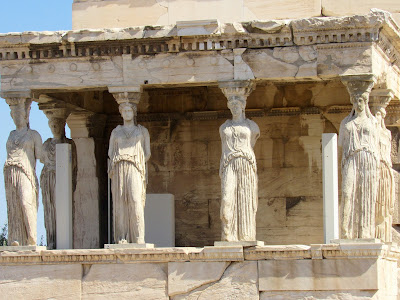 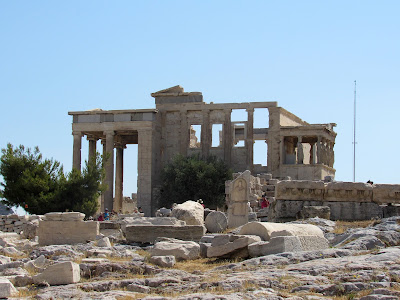