I slept well again last night and had a great breakfast this morning before we set out on the road again. I fell asleep pretty immediately, as did many others I later discovered, and I opted not to get out at the first 'learning stop' of the old underwater irrigation system. I think I will survive without that 15 minute education; the volcano-like structures that housed the irrigation access points were fun to look at, however.

I put on Lyle Lovett while I dozed, the scenery reminiscent (I can imagine) of parts of Texas, so very apropos. We drove to the town of Tinghir, home to many abandoned mud brick buildings overlooking another date palm oasis. Lovely. Tinghir is also the gateway to the Todra Gorge, a breathtaking cut through the mountains along a lovely river. We walked the ~200m path along the water, marveling at the cliffs high above. The tranquil atmosphere was broken, unfortunately, by the unrelenting sales pitches of the mobile vendors who leeched on to individuals and followed them the entire way offering (they said) unbelievable deals. I could have done without that. But otherwise it was lovely!

Lunch was a simple affair in a small cafe run by a very pleasant woman. It was tasty and filling and quick, allowing us to get back on the road in less than an hour. We pressed on, most of us dozing on and off, pausing for a photo stop at another oasis closer to our destination.

We arrived in Ourzazate, Morocco's answer to Hollywood, at about 4pm and had a few hours free before dinner. I skyped home and caught up on email and internet and did some research for future travel. Don't you find that when you travel and talk to people that you come away with a dozen more ideas of places to go? This has certainly been the case on this trip with some well-traveled companions with great stories.

Dinner was an uninspired buffet, but it did the trick, and now it's time for bed. An early-ish wake up tomorrow and on to Marrakesh! 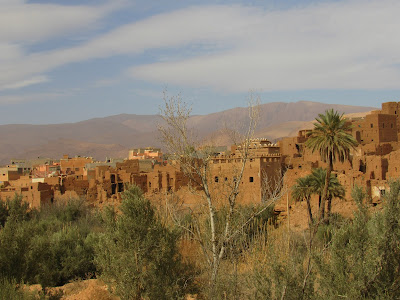 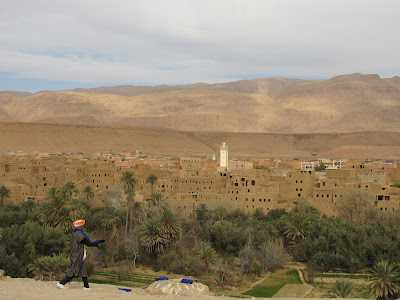 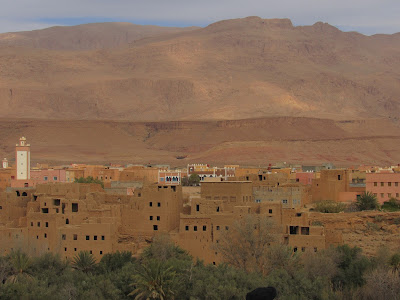 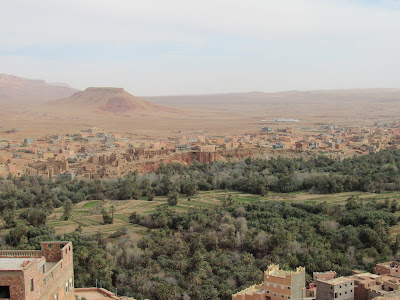 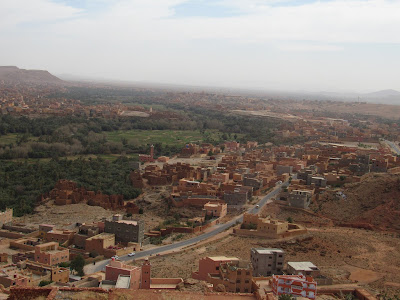 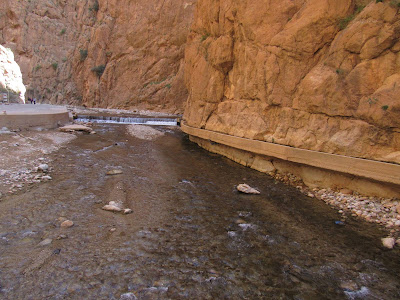 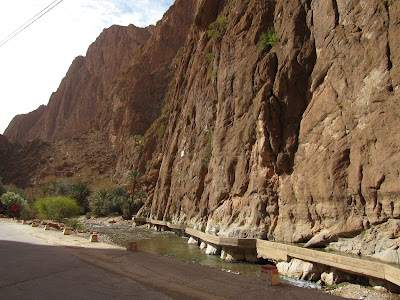 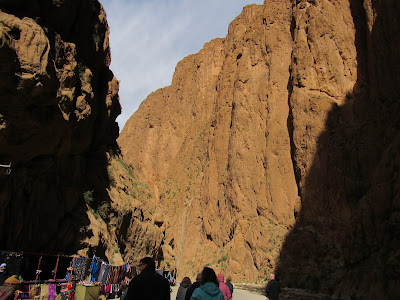 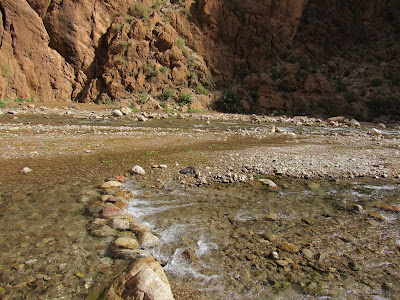 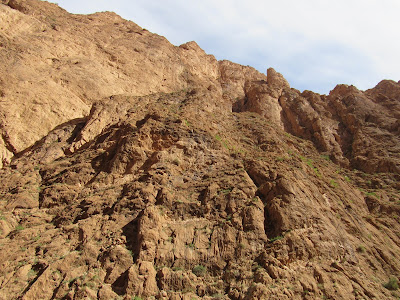 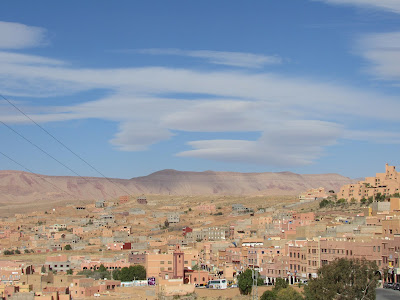 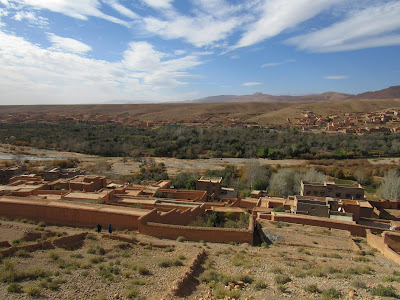 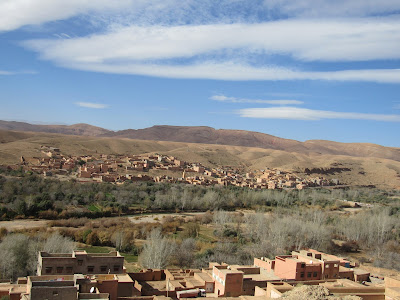 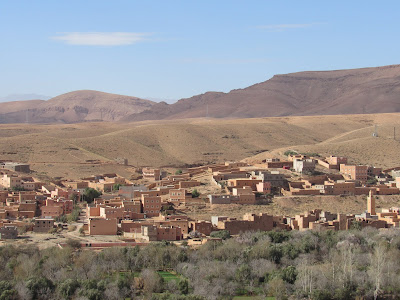 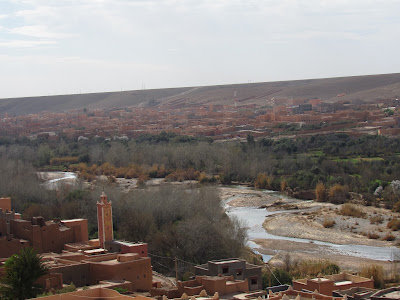 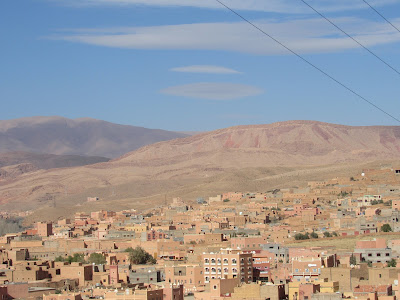 What a day. I was really looking forward to today (it was one of the selling points of this tour for me), and it didn't disappoint. Starting with the best breakfast of the trip, we set out at nine for a fossil factory. I was expecting some humdrum fossils, but this was phenomenal. They have found numerous types of fossils from the Cambrian, Denzonian, and Jurassic periods (dating to 600, 400, and 220 million years ago respectively). They've found micro and macro fossils of nautilus (which have different names depending on the era), squid (which were absolutely fascinating!), jellyfish, and trilobites. Not only that, they do a great job cutting the stones to preserve the fossils as much as possible and then polish and render the stones into useful objects. I thought the hotel sinks might be replicas, but they weren't. They were the real deal. I picked up a few different types of fossils for myself and presents as well as a couple larger, functional pieces. They had bowls, plates, dishes, platters, boxes, and more in all different sizes. Amazing.

Next we met up with our local guide outside the gates to Rissani for a a tour of several key sites as well as more information about Berber culture. Ali, our guide, is a member of a Touareg tribe known as 'blue man group' for their indigo garments. And we saw some lovely examples of these traditional outfits during the day.

We toured the mausoleum of Moulay Ali Al Charif, a peaceful spot with lovely gardens and mosaics, as well as the ruins of the 8th century trading depot of Sijilmasa and an eighteenth century ksar (community of homes and public spaces enclosed by a fortified wall). The ksoors all have mud brick construction and are often abandoned as they begin to disintegrate. One ksar we toured used to house 20,000 people, while only 175 live there now.

After that some people took the opportunity to walk through the local souq before our desert adventure began. We piled into Land Cruisers and set off. We made a few stops en route to lunch in an oasis, visiting a small settlement of a semi-nomadic Berber family. They welcomed us into their tent and structures to learn more about their way of life. The husbands tend to work in nearby mines, and the wives cook and care for the young children. The older children bike a few kilometers to school. It's a hard life, but it's their culture and tradition. Someone asked one of the women how she got her information in the absence of a radio/tv/internet, and she just looked at us as if we were crazy. 'Why would I need information?' she asked, 'this is my life, this is what's important.' And that's certainly one way to go about things.

We stopped again to photograph the beginnings of the dunes and a few Berber villages with more permanent structures than the ones we'd seen earlier. Then we entered into a lovely oasis for a delicious lunch. The tents were nestled among the palm trees, with carpets covering the sand and a nearby well and solar panels providing electricity, flush toilets, and running water. The service was impeccable, the food delicious, and the company priceless. It was a shame to leave so soon.

But off we went into the Sahara, with newly-deflated tires allowing us to traverse the dunes better. There wasn't a lot of dune bashing, but the drivers did have a bit of fun. We had a few photo stops along the way to the rest camp where we met our next form of transportation: camels!

I've had opportunities to ride camels in Egypt, Jordan, and Dubai, but I've never really wanted to. This was part of the tour and experience, so I decided why not. Most of the camels had thick, curly shaggy coats and were dark brown rather than the normal camel-colored camels we see most often in movies. A few were white or white/brown ombré.

I met my camel, who seemed fairly placid, and with the help of a step stool I was seated on his back. Before I had time to prepare myself, up we went! The back legs going up wasn't as scary as I'd imagined; I actually felt a little more off balance as the front legs got up. And off we went. Each Berber guide walked two camels tied together, and my guide and I spoke a bit of Fosha together, both of us awkwardly trying to remember classical phrasing. My camel, he told me, was Azouag. Or something close enough to that.

Azouag and I got along quite well, and he was an agreeable travel companion for the twenty minute walk along the ridges of the dunes in Erg Chebbi on the edge of the Sahara. This was a true caravan of camels, with twenty of us saddled up and walking single file. The photos were fabulous. I was the lead camel in my duo, and the following camel sometimes got close enough that I could pet him. He, too, was good natured.

We rode halfway up a large dune before dismounting (the camel kneeling down is almost worse than getting up!) and walked the rest of the way up. We had an hour before sunset, and we sat and talked with our guides and admired the scenery. It wasn't the seclusion you imagine in the Sahara, as behind us were numerous tourist camps/hotels and a couple roads and villages farther on the horizon. But if you looked south all you could see were undulating dunes of that gorgeous late-afternoon sand color I adore.

Sunset wasn't the best I've seen (there was some haze, and I think we weren't seeing the best colors), but it was extraordinarily pleasant up there. I got up and turned to walk back down to the camels and saw Azouag lying there with his neck and face in the sand. All the other camels had their heads up. Oh great, I thought. I killed my camel. One of the guides saw me looking and laughed. "He's just sleeping," he told me. I said, "Or he's dead." More laughter. The guide whistled and Azouag stirred. As I walked down the dune I saw two more camels put their heads/necks down the same way so I felt a little better.

I climbed back up on Azouag, and we set back off for the camp in the darkening light. Azouag hadn't quite finished his nap and tried to lie down a few minutes in, but the guide kept him going. We reached the camp just as the last light was going and rejoined our cars for the drive back to the hotel. After another fabulous dinner and the ceremonial disposal of the gallon of sand I brought back with me in my clothes/shoes/hair, it was time for writing and bed. We sadly leave here tomorrow and venture on. I could definitely take another day here to relax and enjoy the experience. It's quite a treat. And Azouag was a lovely camel. He didn't spit at me once and tolerated me cooing over him and petting him. And not all animals will do that! 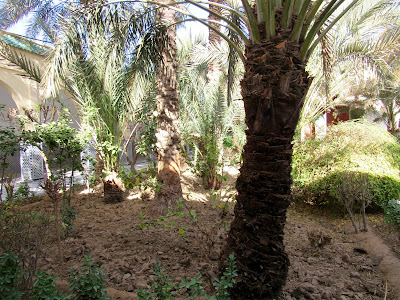 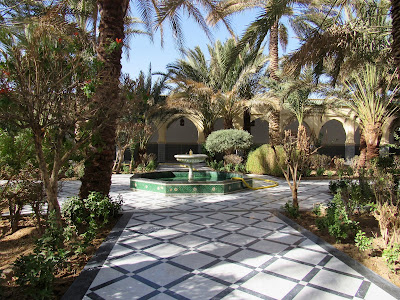 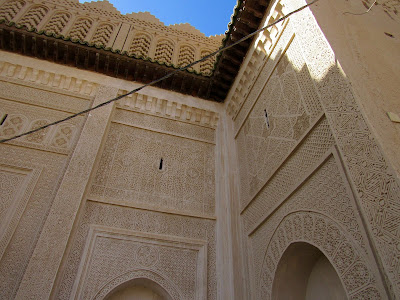 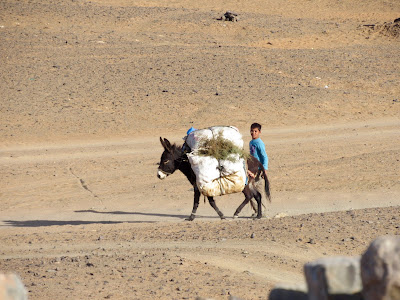 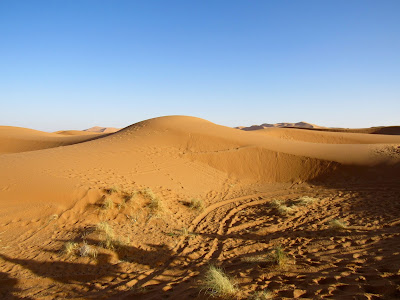 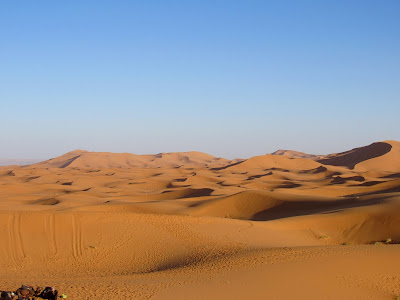 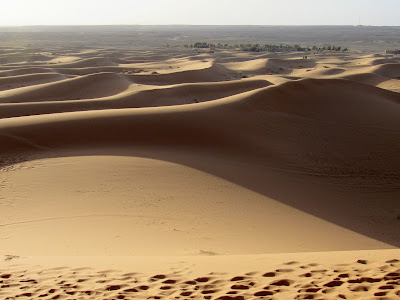 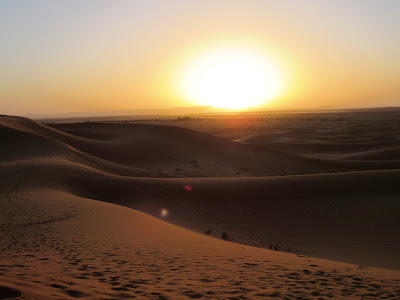 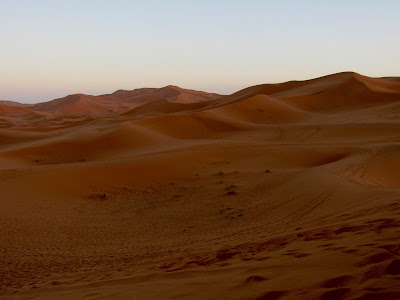