My car here has a CD player, no iPod input, and a limited radio band (which I have not yet fixed), so I listen to a lot of CDs.  I have many mix CDs from college and grad school, which bring me right back to the occasion for which they were made:  a road trip to NYC for New Years in college, a long road trip to Lesotho during grad school, and many others.  It's been a fun drive down memory lane.  It has inspired me to download some of this music so it's in my current iTunes library and not just on a hard drive that no longer connects to my computer.  I should probably do something like that.  So, tonight, my soundtrack is Sublime.  Ah, the memories!

I am at the point in my tour when I can't possibly claim to be new and clueless anymore, especially since after the summer transfer season I am one of the seasoned people at post.  That's just weird; I feel like I just arrived, though it'll be ten months next week.  I'm deep in the throes of mid-level bidding and trying to figure out this whole new facet to FS life and decide what I want to do next in my career.  More on that in November when it's, hopefully, all over.

This week I sponsored my first family, an absolutely lovely couple with whom I have what seems like dozens of mutual friends.  We've been exchanging emails for months, but it was great to meet them and hit off from the first moment.  Their pet arrived safely (yay!), and they brought me cheese and chocolates from Trader Joe's - what could be better?!

It's been a crazy summer, and I'm just starting to wind down a bit, and travel planning is starting again in earnest.  So many places to go, so many decisions to make, so many unknowns with bidding!

Kampala weather has been awesome lately - cooler than normal (70 instead of 80) and some well-timed thunderstorms.  It's hard to imagine going to any other climate after getting spoiled here.  I love walking outside and smelling the air every morning, just after dawn.  Not the dawn part, of course, but it always reminds me of early morning safari drives, and I love that crisp cool air.  By the afternoon the smell of burning trash permeates everything, so I treasure those morning moments.

The broccoli and cauliflower are pretty amazing these days, so I keep trying to find creative ways to use them.  Plus I'm perfecting my ginger-molasses cookies thanks to an influx of new supplies from a recently departed colleague.

My neighbors and I successfully found homes for two kittens who were born on our compound to a feral cat.  They're both domesticating quite well; there's one left we're still trying to find a home for.  We'd really like to find mom and get her spayed, but she's wily and elusive.  My cats were quite perturbed for several weeks because the kittens camped out outside my back door, sometimes jumping onto the kitchen windowsill and meowing pitifully.  They really wanted homes; one even went up the stairs and meowed at a second floor door until someone opened it.  While he did not end up living there, he did get a home on the second floor :-).

Life is good here; it's a comfortable life.  Slow paced but not boring.  I like it.

And isn't it amazing how I still know the lyrics to every Sublime song 17 years later?  Really.
Posted by Sadie at 7:00 AM No comments:

Day 9 brought another lovely weekend, and we had big plans.  On Saturday L and I trekked out to Dagenham to a baby goods shop to pick out a stroller and some other essentials.  Since L is due any day and has publicly announced her pregnancy on Facebook, I feel comfortable telling this part of the story now :-).  (I try hard to protect friends and family's anonymity on my blog as much as possible and not to spoil big news.)  L knew about the store through some friends, so we took the tube and then the national rail to a part of London I'd never been to to check it out.  We had a blast testing out strollers and various and sundry baby gear, with great advice and help from the store owners and employees.  We settled on a Stokke Scoot (which S liked as well when we had him check it out and which now eagerly awaits baby's arrival!) and a few other things and headed back.

On our way we stopped in Stratford, which was the focal point for much of the Olympics.  The main park was closed at the time for the big remodel prior to its grand re-opening as a public venue.  We were craving Thai so braved the Westfields there to get our pad thai fix.  Absolutely worth it!  The rest of the day was spent poring over baby gear catalogs and Babies R Us, with a trip to Marks & Spencer to stock up on food for dinner and snacks.

Day 10 was my final day in London, and I crossed one more thing off my bucket list - seeing The Lion King on stage!  We had bought tickets the day before for the Sunday matinee and planned the day around it.

I woke up early and headed to Marks & Spencer to stock up on a few last minute things, forgetting it was Sunday and a late start.  Oh well.  I got back to the house and went to check in online, realizing in horror that my flight was three hours earlier than I had thought it was.  So much for a relaxing evening after the theater!  I would have barely enough time to get back from the show and do the final packing of perishables (I brought home a lot of cheese and clotted cream) before having to leave for the airport.  Of course I fretted about it all day.

The three of us set out for Covent Garden and had lunch in a lovely Turkish restaurant.  It was one of the few cuisines I hadn't had yet, and it hit the spot.  We wandered through the markets and shops, stopping at Laduree for my macaron fix.  I bought a lovely serving platter with lots of fun colors and patterns.  Then S headed to the library, and L and I headed for the Lyceum Theater.  Our discount tickets had us in the second to last row in the upper balcony, but it didn't matter.  I was mesmerized from the first note, amazed by the costumes and sets as so many have been before me.  I was so engrossed I almost forgot about the short time I had to get to the airport.  Almost.

The show ended not a moment earlier than advertised, and we booked it for the tube.  We made it home with about 10 minutes to spare.  I quickly changed clothes, threw my dairy products into the suitcase, and said hurried, tearful goodbyes.  What a lovely visit!

The traffic getting out of London was surprisingly heavy for a Sunday evening, but once we were on the motorway we were all set.  I checked in with no problems and made it through security in record time.  I'd never flown out of Terminal 5 before, so it took me a few minutes to get my bearings and then hit the important places:  Harrods, Boots, and Wagamama.  I had just enough time to slurp down a bowl of ramen before heading to my gate.  I arrived just in time to board and was able to move to an empty row of seats once the doors closed.  We sat on the tarmac for quite a while, waiting for a passenger who never showed up.  They then had to find and offload his luggage, which of course had been some of the first on.  Over an hour later, we'd lost our departure slot and had to wait for another one.  The flight was uneventful and too long for my taste.  We landed an hour late, considering we took off almost two hours late.  All my luggage made it, the drive back to Kampala was blissfully quick, and I had a joyous reunion with my cats.  All my dairy and toiletries made it safely!  After a welcome brunch at a neighbor's, I collapsed in bed and indulged in that deep sleep that only comes from long travel and sleep deprivation.  There's nothing quite like it :-).

And that was London.  Wonderful in every way, and I can't wait to go back.  Thanks again L&S!
Posted by Sadie at 2:00 AM No comments:

Day 7 called for another check on the tourist site list - royal London and changing of the guard!  I did another London Walks walk for this, meeting at St. James's Park tube station.  We wandered through the back streets and a corner of St. James's Park before crossing to Horse Guards Parade.

This was the venue for the beach volleyball in the London Olympics; I hadn't realized just how non-beachy the setting was until I saw it in person.  Still, very cool.  Everything was staged for ceremonial events for the Queen's jubilee and Trooping the Color the following week, so it even looked a tiny bit like what I'd seen on tv.

We arrived just in time to see the changing of the guard.  There was a bit of crowd, but it was still possible to see most of what was going.  Very regal, very elegant.

Then we quickly headed down the Mall towards Buckingham Palace, where we caught the tail end of the guard changing there too.

The Mall was all decked out in flags and splendor for the jubilee, and it was great fun to take it all in.  The Queen just happened to be hosting a garden party that morning, so we got to watch arriving guests park and walk towards the palace.

From there we walked to Hyde Park Corner along Green Park.  As we stood under the Wellington arch, several police came up and ushered us out and to the sides.  Two horse-drawn open carriages came through the archway; we waved and gawked.  One of the occupants was the Lord Mayor of Westminster; we didn't identify the others.

From there I headed to Oxford Street again for a late lunch at Wagamama.  Yum!

I took a nap in the afternoon, and then we ordered Indian for dinner.  We ordered from the same restaurant where L&S had their wedding reception, a lovely place not far from their flat.  I had been craving one dish they'd served at the wedding and hadn't seen in any other restaurant, so I figured out what it was (palak papdi chaat) and ordered it.  Neither of them had eaten it since, and we all enjoyed it!

Day 8 was my first and only lazy day.  I slept in and then walked down Finchley Road to do some shopping and have my semi-annual pilgrimage to Nando's.  Oh Nando's.  So good, no matter the country.  That evening we all ate dinner at a cozy Italian place on Finchley Road and then they indulged me as I wandered the aisles at Waitrose, marveling at the many wonders there.

As always, the photos below are out of order.  Sigh. 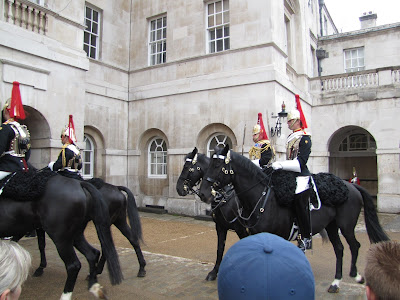 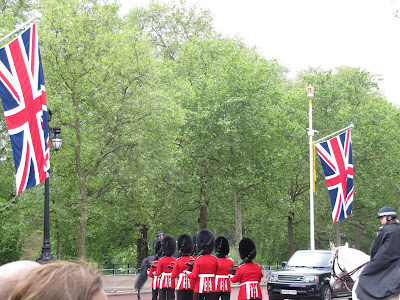 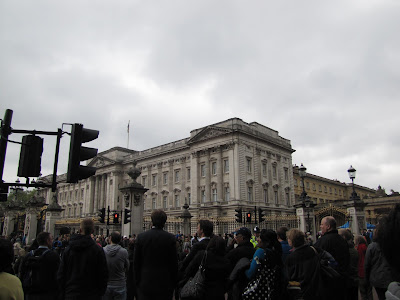