Five thirty am came quickly today, though I slept very soundly. After a quick cold breakfast I was in the car, and we set out by 6:10 for our morning drive. It is much cooler today and appears to have rained somewhere. Rain is forecast for the evening today so we'll see. There were clouds this morning, but the sun finally came through. But right up until about 9:30 am it was quite cool with a lovely breeze.

We saw animals in fits and spurts this morning, as sometimes happens. You'll drive for twenty minutes without seeing anything so much as a turtle dove, and then all of a sudden there are several herds of antelope and a bunch of predators! We first saw a lone hyena heading away from the dead elephant; she stopped to wallow in a mud hole and let us take her picture before continuing on. We skirted the river bank where we'd seen the leopard yesterday, but she either wasn't there or was well hidden. We continued farther afield and turned into an open field with some fresh green grass where puku and impala were munching with great enthusiasm. It looked like it might have gotten some rain last night here. And then we heard the impala warning calls and looked over to see several vehicles clustered around a tree. We headed closer and saw the lions - seven of them. Six females, including some younger ones, and a young male just starting to grow a mane. They were watchful of the game around them but perfectly content to lie in the shade and be admired. Apparently this is a pride of nine, but one female and another young male were missing.

After a few minutes we headed over to the herd of elephants clustered under wild mango tree, being fed by the yellow baboons. The elephant love these fruits but can't reach the high branches where the fruits are, so they wait for the baboons to shake them loose and fall to the ground. It was a group of four males (including a young one just growing tusks) and one female. They were a bit aggressive to each other while competing for the fruit. I love watching symbiotic relationships in action. We took another pass at the lions who hadn't moved much and then headed off.

We hit another dry spell as we drove through some new (to me) territories, but Elias used the time to have me identify scat and footprints and look at weaver bird nests. I definitely need to brush up on my scat/track identification, though I got the hyena scat right. (It's white due to the bones they ingest.) We also saw the first buffalo of my trip, two retired generals hiding in the bush.

Elias got a phone call that there was a leopard with a kill near the lodge, and since it was already 9:00 we decided to check it out. We saw a hyena emerge from its culvert den and a few warthogs, but there was little else on the way.

When we reached the area where the leopard had been the first thing we saw was a herd of buffalo. It was a big herd, roughly 200 of them, and they were grazing and crossing a gully in front of us. We watched them for a bit and set out to find the leopard. We saw him from a distance, but he was skittish and ran away as soon as we got close. We caught a couple glimpses of him in retreat but didn't get great views. He did leave his disemboweled impala for us to admire, though. So if you're squeamish maybe don't look at all the photos below.

We were pretty close to the lodge and headed back, unexpectedly passing the wild dogs in their secluded day spot. They were dozing in the shade, and even the pups weren't playing right now. The sun was starting to get hot. So we finished our trip back to the lodge. The staff who greeted us excitedly told us about the lions they had been watching from the lodge, so we headed to the veranda and got out our binoculars. And sure enough, there were three lions in the distance. It looked to me like three lionesses, but the staff told me it was a mother lioness and two adolescent cubs, a male and female. They were visible with the naked eye but not with great clarity. They settled under a shady tree for a nap, and I headed back to my room to freshen up before lunch.

So the totals for predators: lots of hyenas (I haven't been counting); fourteen lions (the four males, the seven from this morning, and the three in the distance); 20 wild dogs, spotted on three consecutive drives; four leopards (two males, two females, with two good sightings each of one of the males and females). Not bad for four game drives! 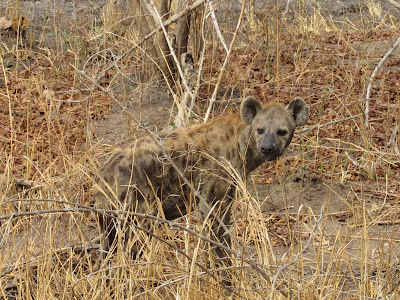 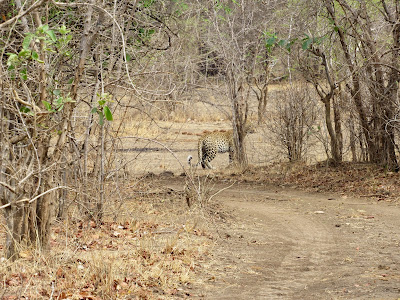 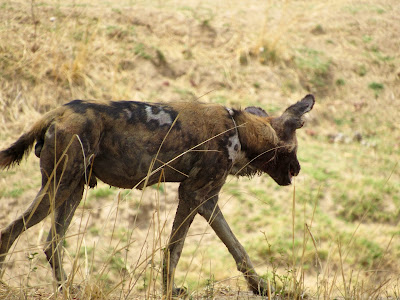 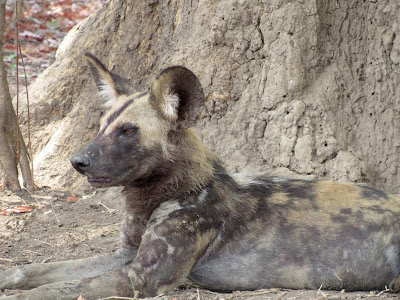 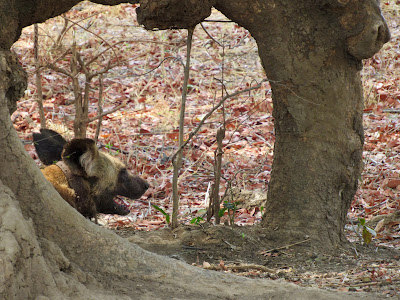