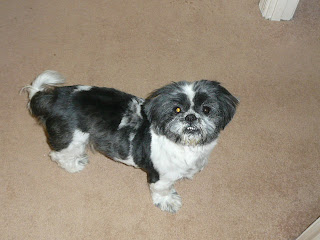 Yes, yes, I know it has been two weeks since I last posted.  But it's been a busy two weeks, really!  And I'll get to that (probably) in another post this weekend, but, first, here's my contribution for this week's State Department Round Up, hosted by Cindy at enclos*ure.  The topic is gardens created loved, and left in the Foreign Service.

Now, I am not any kind of a green thumb.  I am very, very bad with plants.  I like them, but I am not good at keeping them alive.  When I lived in South Africa, one of my friends and I shared this amazing furnished cottage.  It was not until we had lived there several months that we realized we had a 6-foot tall plant in our dining room.  We realized it because it was dying and the leaves were falling off and crunching underfoot.  Whoops.  So that's the kind of thing I'm talking about.

At my wonderful job before I joined the Foreign Service, we worked in a condo with a lot of natural light.  When I had knee surgery one spring, my coworkers gave me a beautiful orchid as a get well gift.  I loved it - it was pink and elegant and so beautiful.  It sat in a place of honor on my desk and soaked up the light and the occasional water when I remembered to give it some.

My orchid seemed to thrive, and, before long, I had to transfer it to a larger pot.  I selected the new pot carefully and even bought special orchid potting soil.  The transfer went smoothly, and the orchid continued to thrive, with new blooms and new shoots (stems? branches? see, I have no idea...) all the time.

About six months later, it was time for me to transition.  I packed up and moved from NH to DC.  The last step was a long drive to Falls Church - 8 hours at the best of times, but usually closer to 12.  My car was packed to the gills with stuff - I really could not have fit anything else in there.  Hattie and her bed rode in the front seat, which was not ideal, but it was all I had.  The orchid, protected by several makeshift cardboard shields, rode on the floor by the front passenger seat.

The drive was long and hot.  My car didn't have A/C, it was a miserably hot August day, and every family in New York and New Jersey was headed south towards the shore.  Hattie and I barely survived it, and I know my orchid suffered.  I spent much of the ride dousing Hattie with cool water and pleading with her to drink.

When we finally arrived at Oakwood thirteen long hours later, Hattie and the orchid were the first out of the car.  My poor orchid had already lost a few blooms.  I set it on the counter in the kitchen and gave it a bit of water.  Hattie parked herself in front of the A/C vent and played anxious puppy there (instead of at the front door).

In the coming days, my poor orchid lost all of its flowers and started to turn a nasty shade of brown.  (Hattie adapted quickly and easily to being an apartment dog and started to thrive, loving our daily walks and lots of cuddle time.)  I didn't know what to do for my plant, so I stuck it on a windowsill and promptly forgot about it.  I may have watered it once every few weeks.

A few months later, having settled into Oakwood for the long haul of language training, I took a look at my orchid for the first time in forever and, to my complete surprise, saw a number of new buds and branches!  I gave it some water and moved it to a spot in the living room where it could sit on a bookshelf and get some natural light and more attention from me.  Miraculously, my beautiful orchid was bigger, better, and more beautiful than ever.

I always meant to buy a companion or two for my miracle plant, but I never did.  And as it came closer and closer to departure time, I fretted over what to do with it.  I was flying back to NH, so it was not going to be easy to transport it back.  It certainly was not going to make the trek to Saudi.  So I asked a friend and neighbor if she'd be interested in taking on my plucky, low-maintenance orchid.  She was delighted, and the night before I left I brought it to her.  It was hard to say goodbye, but it was a great solution for all.

Over the next year of her language training, my friend occasionally let me know that the orchid was still doing well.  I realize now I don't know what happened when she left for post, but I imagine the orchid stayed in VA, possibly passed on to another FS family.  And instead of asking, I think I'll just use that as the reality.

Here is the only photo I can find featuring my orchid.  It's a poor one, taken for book inventory purposes.  The stem with the visible flowers grew after the move to DC.  Clearly I never found a good stick to support it.  The glass on the shelf was to remind me to occasionally water the poor thing.  Really, I have no idea how it survived. 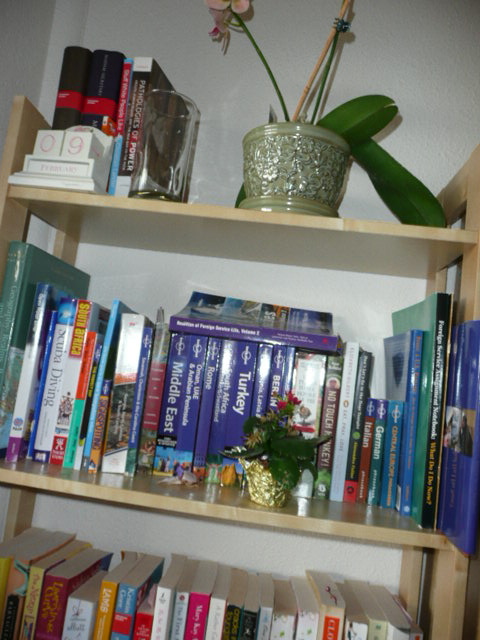 Oh!  I see on the second shelf the other little plant I kept alive for longer than a week!  I think I passed this one along to my grandmother, who has the greenest thumb of anyone I know.

In Saudi, I don't have plants at home, but the compound is lusciously landscaped and very pretty.  There's a giant bougainvillea outside my living room balcony.  I do, however, have a plant in my office now.  Walking down the hall one day, I noticed this large pot with a 5-foot tall plant of some sort, complete with a Post-it on one of the leaves proclaiming, "please take me home with you today!"  So I came back with a dolly, loaded it up, and wheeled it back to my office.  It was almost dead when I found it, but several months later it's still alive and occasionally looking good.  My coworkers are helping me keep it alive, occasionally giving it coffee or nutrients or water when I forget.  We've named it Aziza.  Right now I have to say she's looking a bit worse for the wear, but I am determined to get her back to full strength.  And, after all this time, Aziza still sports that original Post-it note on one of her leaves.  I just couldn't bear to throw it away, for some reason.  The leaf, however, has grown big enough to accommodate the note.  And that's what really matters, I suppose.
Posted by Sadie at 4:29 AM 1 comment: