I realized I am many months (years?) behind on blog posts about trips.  So here's one from home leave 2012...

So now to talk about my absolute favoritest musician ever, Lyle Lovett.  Some of you may remember this post from three years ago, when I flew Mom to Texas for two back to back concerts.

I hadn't seen him since then, his touring schedule not jelling with my U.S. visit schedule.  Sad panda.  Luckily, though his summer tour had several convenient overlaps this year!  In April my mother asked me if I wanted tickets to see him in Shelburne, VT for my birthday.  Umm, yes.  Definitely.  I hadn't even seen that date released yet!  I took a look at the tour calendar and canvassed other available dates.  Given the hectic schedule that was going to be home leave, I hesitated to book any travel-required trips.  But, Lyle happened to be playing at one of my parents' favorite venues in MA, so I bought us another round of tickets.  Who cared if the two concerts were only three days apart!?

The date for the first concert arrived quickly - my first Tuesday back in the States.  It was an absolutely perfect, gorgeous summer day.  About 75 degrees, sunny, no storm clouds in sight.  We arrived at the Shelburne, VT venue about 20 minutes before the gate opened, got a decent parking place in the field, and grabbed our chairs.  The outdoor venue, in a huge field on a hill, was beautiful.  We had taller camp chairs, so we were obliged to sit a bit farther up the hill, the lower part reserved for those with low beach chairs and blankets.  It was busy without being crowded and a gorgeous setting.  We scoped out the vendors - co-sponsor Ben & Jerry's was giving away free samples!! - and I bought a canvas tote with a scene from "If I Had a Boat".  After a nutritious hey-I'm-just-back-in-America-from-serving-my-country-overseas dinner of nachos, frozen yogurt, and a coke, the sun set beyond Lake Champlain, and it was time for the concert!

Lyle was playing with his smaller Acoustic Group, all of whom are wonderful musicians in their own right and all of whom I enjoy seeing (almost) as much as Lyle himself.  The setting for the concert was amazing, and Lyle et al did a great job, but I think the acoustics were a bit subpar.  We didn't realize it completely at the time, but I was not as blown away by this concert as I usually am.

Three days later we drove down to Lowell, MA for concert number two.  I spent a lot of time in Lowell as a child and young adult, on field trips to the Boott Cotton Mills.  My parents go back every summer for Lowell's International Folk Festival, though I've never managed to be in the United States at the same time.  Anyway, we know Lowell pretty well.  On the drive down, it started raining.  Like blinding, pouring, can't see anything but the yellow line on the road kind of rain.  I was driving and slowed way down, and the next hour was a super-stressful stretch of road as we navigated southern NH and crossed into MA.  We arrived several hours early - as planned - and parked in the nearby garage.  We took our lawn chairs and headed to the venue to claim our spots.  Hundreds of others had had the same idea, but we still got a nice spot.  It was still drizzling and very gray, and we used garbage bags to cover our chairs in an effort to stop some of the downpour.

We walked to my parents' favorite BBQ restaurant and had a hearty dinner, capped off with a delicious slice of pecan pie.  Thus sated, we walked back to the venue.  We had another 90 minutes or so before show time, but there wasn't anywhere else to go since all the shops were closed (it must have been a Sunday afternoon; I honestly can't remember now), so we dumped the gallons of water from our now soggy chairs and settled in.  We had come prepared in good rain gear, but that didn't really help since we were already wet and sitting in wet chairs.  The rain finally tapered off, and the concert started only a little bit late.  Lyle seemed genuinely touched that so many people were willing to sit in the rain for the concert - the venue was packed! - and he was in fine form.  We were much closer to the stage than the previous night, and the acoustics must have been better, because this was truly a concert that blew me away.  Arnold McCuller joined for a few songs, but the set was otherwise almost the same.  It was just so much more powerful.

I would highly recommend checking out Arnold McCuller's, Luke Bulla's, and Keith Sewell's solo work, especially Keith's song Let Me Fall.  They each did a song of their own at the concert, and all were great.  The rain held off the for the rest of the evening, so we just had to contend with the existing dampness.  But it was worth it!

We changed into dry clothes and headed home, thus energized.  Another year, another two great concerts by Lyle.  The photos below were all taken at the Shelburne concert, since it was too wet to get out my camera in Lowell. 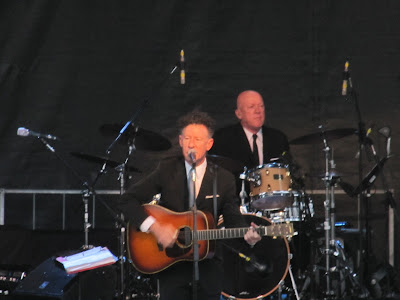 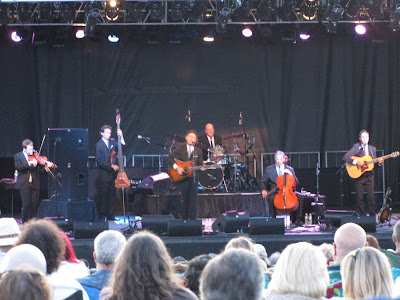 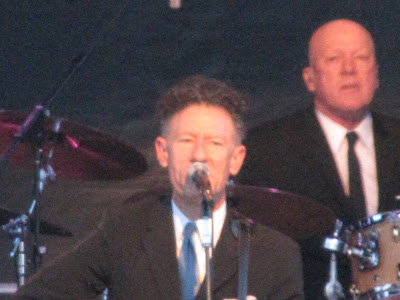 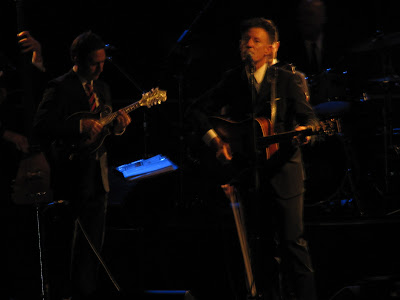 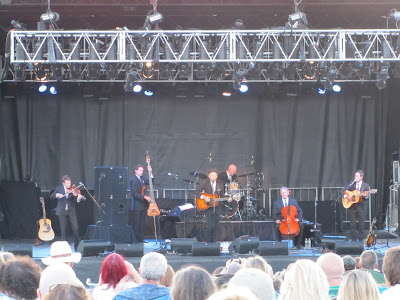 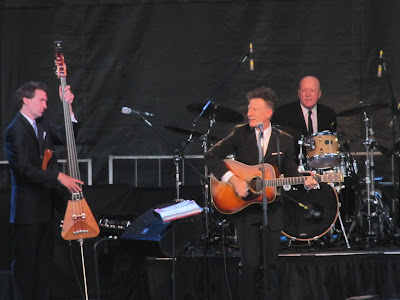 There's a lively debate going on on an FS social media group I belong to about the merits of owning pets in the Foreign Service.  Some people think it's not worth the hassle, some think it's great if it's easy, and some wouldn't dream of moving without their furry companions.  I fall into the latter category, which should come as no surprise to any of my readers.

Yes, I complain about the difficulty of moving pets from place to place, the paperwork hassles, the expense, the extra stress, and, of course, the moment it all went horribly wrong.  But I wouldn't have it any other way.  It's all worth it the moment you let the pets out at the final destination and breathe a sigh of relief as you realize you're actually home.  Welcome kits may be inadequate, empty white walls may be sterile, but having pets in the house makes it a home.

I must have internalized this debate more than I realized, because I had a dream last night that, while traveling to see friends, I adopted an orange cat and two ferrets with coats like cheetahs.  And since I am not a huge fan of ferrets, it's even more odd.  The furry cheetah coats were pretty cute though.  Anyway.  I woke up this morning with a slight panic at the thought of moving around five pets instead of two and only calmed down when I realized it was a dream.  It got me thinking, though, do I have any regrets about bringing pets overseas?

And you know?  I don't think I do.  I have guilt - guilt every time I put the cats on a plane, immense guilt over Hattie's death, guilt about leaving the cats when I go on vacation - but they're not regrets.  I don't regret bringing Hattie with me; I do regret that I wasn't more aggressive in getting her out of customs, but that was due to lack of experience and local knowledge.  She wouldn't have wanted to stay in NH without me.  My cats may not like flying, but neither do I.  And it is a small price to pay for several years of staying put and being  happy together.

There's probably more poignant things I could say, but I would encourage any FS community member (or, really, any expat) to figure out how important pets are to you and proceed accordingly.  There's no right answer, and it could always go horribly wrong, but most of the time it goes wonderfully right.  And that makes it worth it to me.
Posted by Sadie at 11:07 AM No comments:

I was, sadly, sick on my birthday and had to cancel a weekend getaway to Jinja.  (All of the other planned travelers were also sick or just recovering, so it worked out.)  After a restful Friday afternoon, I felt well enough to go for what I thought would be a half-day trip.  My friend and I borrowed another friend's driver and took off in search of the equator!

The closest equator crossing in Uganda is about 75 km southwest of Kampala.  I figured this would be about an hour and a half or maybe a two hour drive.  We pulled in more than three hours after setting off.  (The drive back took only two and a half hours.)

The equator crossing consists of two circle-like structures on either side of the road with a line connecting them, two small cafes, and several touristy craft shops.  We browsed the shops, decided everything was over-priced and available elsewhere, had a quick lunch (filling though unremarkable), and then headed back.

The Baganda royal drum-makers have their workshops on the same road, but there was construction on the entire stretch and nowhere safe to pull off and take a look.  It won't be my last chance - this is the road to many of the country's attractions!

My parents pointed out that there was some cosmic balance to celebrating my birthday by straddling the northern and southern hemispheres since I was born on the night of the 20th century's largest lunar eclipse.  Kind of a neat way to think about it!

Here are the only two photos I took that day - kind of anticlimactic, I know. 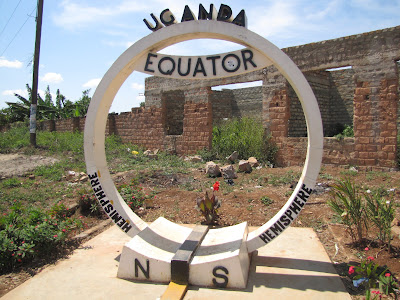 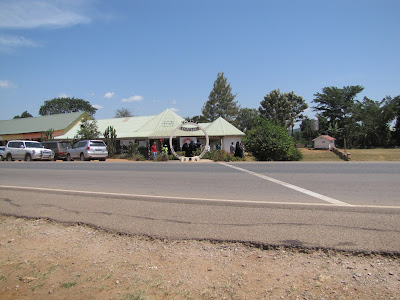