Our apartment complex is home to a small but mighty band of feral cats. Several of my neighbors are animals lovers like me, so we've been on a mission to reduce the population growth so the family is sustainable and can keep the rodent/insect/lizard population in check. (I have never seen a mouse or rat here, but I do watch the cats eat moths, geckos, and grasshoppers with gusto.)

Last January the female cat gave birth to three kittens. An orange one invited himself to live with my neighbor, a beige one went home with another neighbor's nanny, but the grey one didn't find a home, despite our best efforts. She stayed around for the most part, disappearing for weeks at a time but always coming back. Not terribly friendly, she remained an elusive compound resident.

In February one neighbor knocked on my door one night, saying she heard kittens crying. We traced the noises to a raised garden bed by the pool and - sure enough - there was a loud little black kitten on the ground. We picked him up and placed him back on the bed, where the grey cat snatched him up and took him back to her nest. Little grey was now Momma cat. In the light of day we realized there were two kittens - the black one and a beautiful grey tiger striped little one. They were at that point about 3-4 weeks old, we think. We visited them twice a day to try and socialize them, with the hopes of finding homes. On Valentine's Day, after coming home from a ladies' night out, I heard a terrific scream coming from the raised bed and saw Momma cat fighting with the presumed father (and also grandfather, as we believe he's Momma cat's dad as well). I chased him off, but the next morning I found the little grey kitten lifeless.

We bought a shovel and buried the kitten, with Momma cat and the lone remaining kitten watching. It was quite sad. They left their nest then and didn't return. We'd see one or both of them occasionally, but they were fleeting sightings. At that point they were both so feral we didn't have hopes of catching either one.

Fast forward to a few weeks ago. I went down to the gym for my Saturday morning workout and was followed in by the black kitten. He was only a little bigger than the last time I'd seen him, and he was clearly starving. Momma cat was nowhere to be found. I made the decision to feed him - something I'd never done before - because I just couldn't watch him starve to death. I brought the food down to the gym and let him eat while I ran on the treadmill. Momma cat came in and scarfed down some of the food while I watched, first batting black kitten out of the way but finally letting him eat too. She was very clearly pregnant, which explained why she had stopped nursing him and was clearly trying to distance herself from him.

My neighbors and I started an active campaign to find him a home. Over the next week he became our shadow, meeting us at our doors every morning, escorting us to the shuttle, and then meeting us at the top of the stairs when we got him. On Friday morning he came down to the parking lot and tried to get in the van, which was the sign we needed to find a foster home before he got himself run over. One neighbor took him in that night, and in the last two weeks he has blossomed. He's filling out, playing very well, and completely socialized. He needs a home! I call him Arthur; his foster mom refuses to name him in hopes of finding a forever home soon.

Meanwhile, Momma cat started coming back around and looking for food. She didn't look pregnant anymore, but she also wasn't acting like she had just given birth, and she didn't seem to be producing milk. Amazingly, when she thinks she's getting fed she'll tolerate being petted and prodded.

One day, though, we came home from work, and the guard told us there were kittens. She showed us where, and - sure enough - there was a tiny little bundle of grey fur. As we watched, three more forms came into view. Three grey, one black/grey with striped markings. They were in a raised bed right next to my apartment. We decided that for the sake of the kittens and Momma cat, we'd feed her to keep everyone alive and to give us a chance of getting her spayed in a few months. We estimate the kittens were, at that point, about five days old. No open eyes and very clumsy movements.

We christened Momma cat Lolita, Lola for short, and I started a routine of feeding her every other day on my porch. Lola associates me with food, so she always comes to greet me, morning and evening. Interestingly, even if there is food in her bowl, she won't eat unless I'm home. I'm trying hard to build the relationship so we can get her spayed as soon as she weans them. My cats think it's very odd to see another cat eating on the porch, and they watch in fascination. Lola and Callaghan meow at each other through the front door, but that's about as far as the interest goes.

At first Lola was a little put off by our ogling the kittens, but over the past two weeks she has calmed considerably. She has moved them twice, but each time she willingly shows me the new nest. One day this week, while she was eating, I was looking for the new nest. I almost stepped on one of the grey kittens, but the nest was nowhere to be found. He was shivering, so I picked him up and cuddled him as he squealed. I brought him to Lola, but she had no interest. So I went looking again. Lola finished dinner and came to show me the nest, and I put him back, and she licked him. I believe this is the same one who had fallen out of the previous nest and also had to be returned. He's a wanderer.

I've named the four kittens Arlo (the wanderer), Janis, Pete, and Lucinda. They are now about 2.5 weeks old and still very clumsy in their movements, always looking for Lola and their food. They do, however, respond to voices and are now perking up whenever we talk to them, edging each other out to see what's going on. We have at least one confirmed home and are working on the others. The vet is ready to spay Lola as soon as she weans, probably in another 4-6 weeks. So, anyone in Kampala want an adorable kitten? 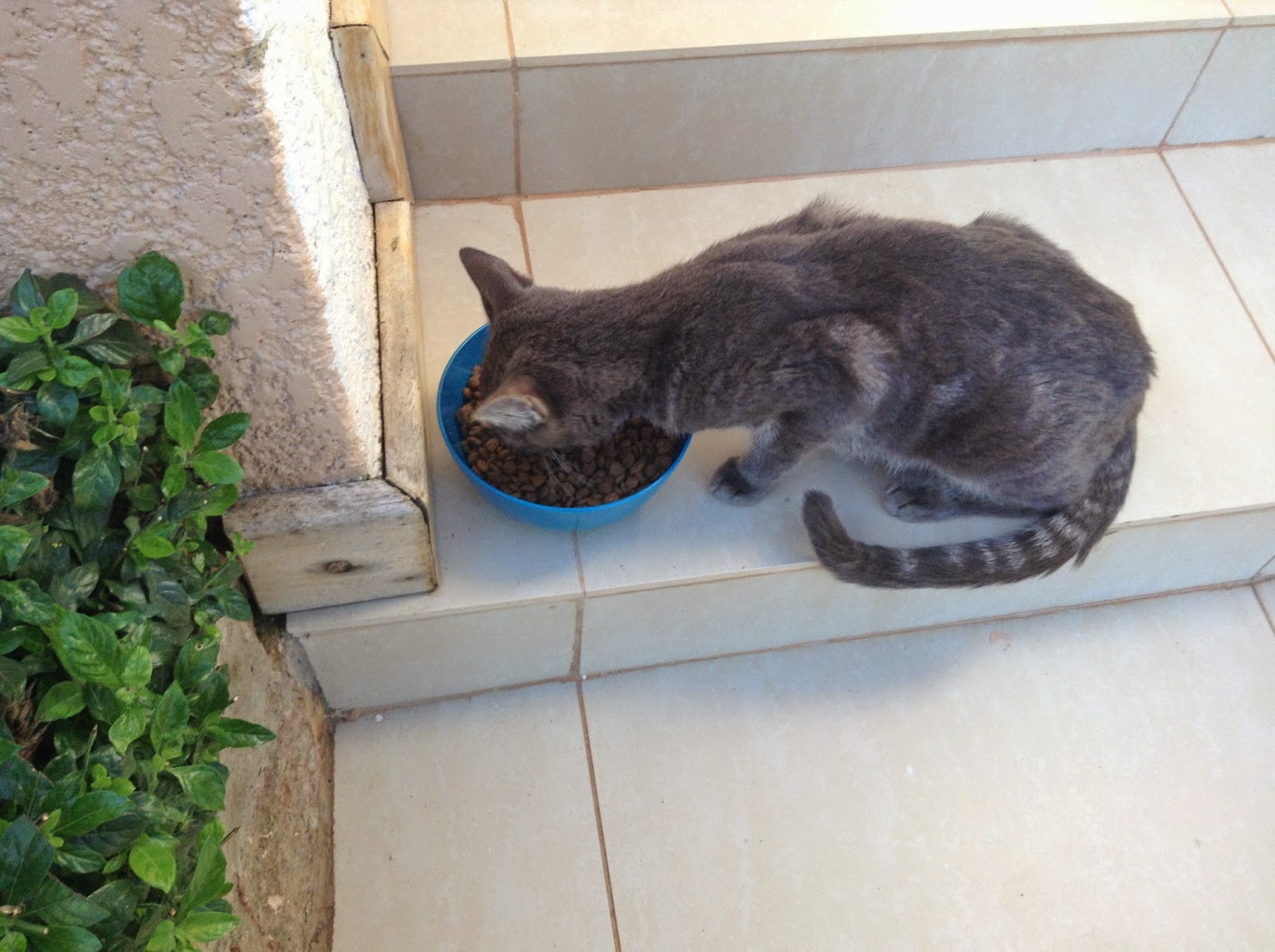 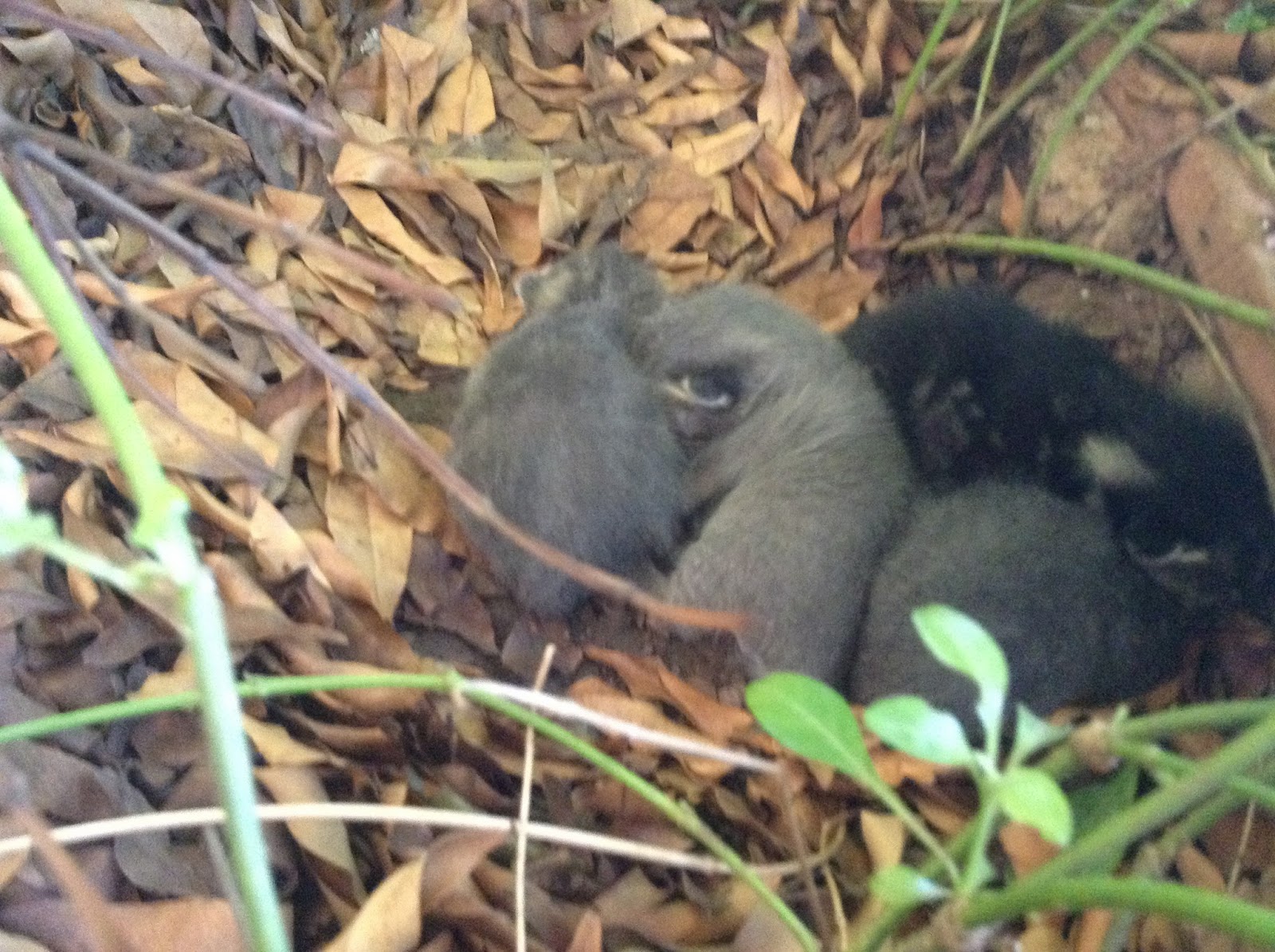 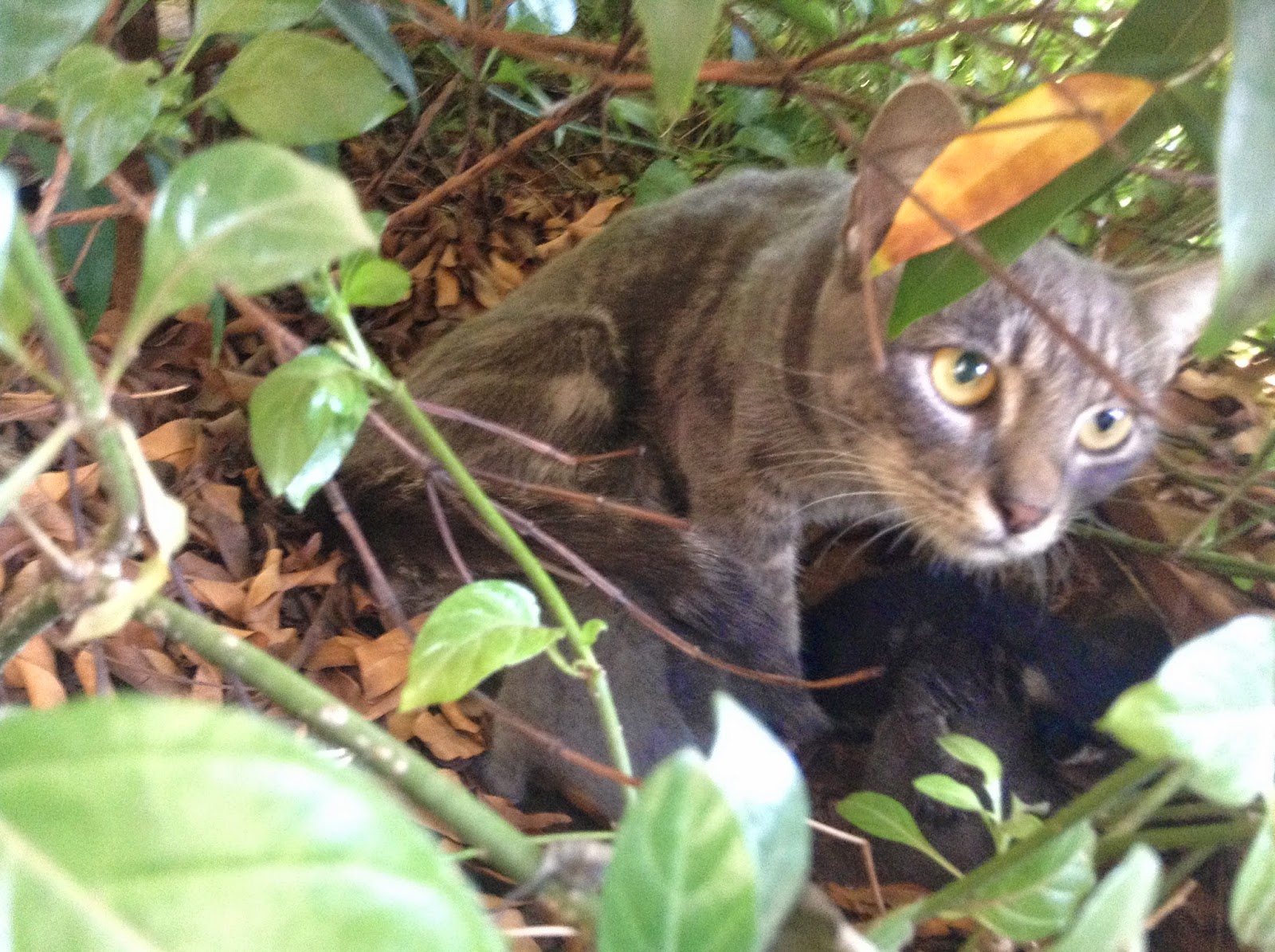 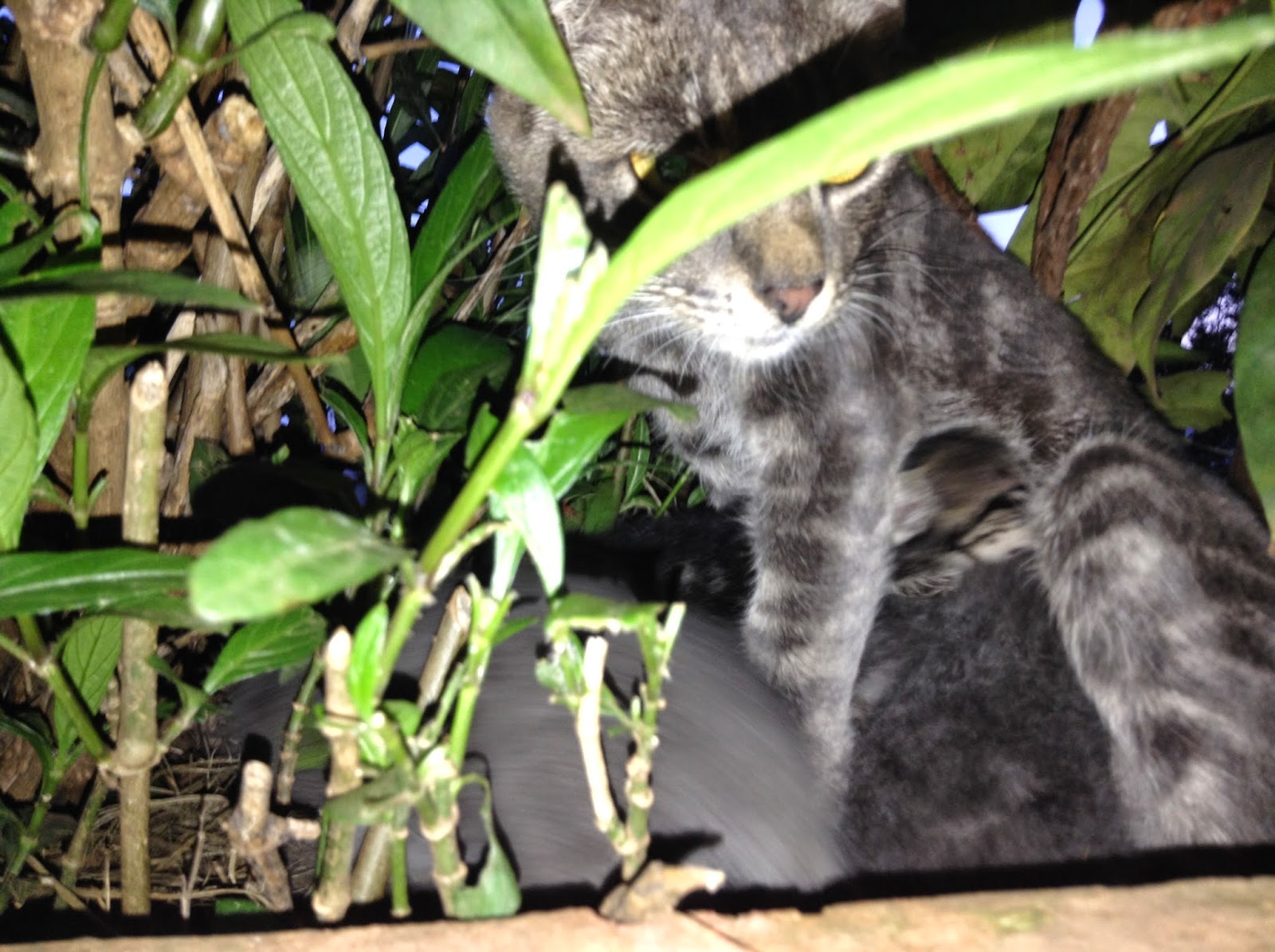