Day 2 in Murchison Falls started with waking to the sounds of hippos grunting in the water. We got dressed and packed and headed to the main lodge for breakfast. We had allotted 90 minutes for a leisurely breakfast and checking out, but the bajillion course breakfast was even more leisurely, and we ended up leaving about 30 minutes after we'd planned. Meanwhile we watched the hippos (back in the water) and chatted and enjoyed being one of only two groups of guests at this impeccable lodge (the other group was a quiet British couple).

Finally we were back in the van on our way to the other side of the park to our second lodge. This necessitated leaving the park and driving around to another gate because the one road through the park was currently impassable. There were plenty of various antelope (which we now just call DLTs, short for deer-like things, a term coined during last year's Kidepo trip and one that comes in very handy), a few giraffes, and some monkeys as we drove out of the park, and then we got back on the main road and drove around to the other side. As we got closer to the park again we started seeing elephants in the fields and swamps and stopped a few times to take photos. One particular elephant, very close to the road, was balancing on three legs and had his back left leg crossed around the other back leg, nursing a very nasty wound from a poacher's snare. We all winced and cursed the poachers and wished him well. He'd feature again later in the weekend...

We re-entered the park around noon and headed towards Paraa Safari Lodge. Along the way we spotted our first Jackson's Hartebeest - my favorite dopey-looking antelope, patas monkeys, our first buffalo of the weekend, and plenty more DLTs. We were greeted by a sightings board which amused us to no end given the hilarious projections of numbers of hippos, deer, and warthogs as well as the lone motorcycle rider. We noted that the only predators on the board were 2 lions, but our guide said they had actually been seen the day before.

Paraa, though owned by the same company as Chobe, is a very different type of lodge. An older lodge, built in a more rustic British colonial style, shows its age in places, and the staff were not as customer-oriented as we'd experienced at Chobe. Perhaps it was because the sheer volume of guests was overwhelming; we were immediately wishing we had another night at Chobe. Our rooms weren't yet ready so we headed upstairs for lunch. The buffet lunch was pretty disappointing after Chobe, but we made it work.

After checking in to our lackluster rooms, we read/napped/sunbathed until it was time to go on an afternoon drive. We met Grace at four and loaded into the car, roof raised, for our drive. Once we left the lodge and the park gate we soon met a recurring herd of waterbuck who we would see along the same stretch of road for the next two days and then elephants heading from the marshy areas toward the river. It was dusty and hazy here, owing to the dry grass coupled with smoke from seasonal burns. At one burn site, near the airstrip, there were thousands of birds testing the still-smoldering soil to probe for bugs and yummy treats. When it got too hot they'd fly up for a few moments and then fly right back down.

We saw our first (of many thousand) oribi as we went further into the park. These tiny little antelope are adorable, often in pairs, and are seemingly fearless as they only bound away once you're quite close. This all adds up to cute most of the time, but we did see one poor guy who had bounded into oncoming traffic instead of away. They were making the most of the last hours of sunset, often lying in the warm dirt of the road, which was a hazard to driving.

We started seeing more hartebeest, my favorite dopey-looking antelope, and kob and waterbuck. As the dry grasslands segued to hilly savannah and green pastures the herd animals were all on display. We saw a lot of giraffes in the distance, fewer up close.

We made our way toward the Nile, starting to see some pockets of buffalo, spotting an elusive bushbuck family in the dense brush, and scaring a family of guinea fowl. The river was beautiful, with views of fisherman trying to bring in a bit more catch before sunset, a huge flock of crowned cranes flying, and buffalos and elephants in the reeds. We saw pods of hippos, what might have been crocs (from a distance so we couldn't tell), and smoke from burns across the river. Game was relatively sparse here, and no predators were in sight.

As we made our way slowly back to the lodge, the five of us stopped chattering and all intently stared out the windows in search of predators. All of a sudden, as I at least was lulled into a bit of a trance, Grace slowed the vehicle, stopped, and then backed up. "A leopard," he said calmly, as the five of us sprang to action searching for what he'd seen. Sure enough, there in a tree to the right of the road was a beautiful leopard. Probably fairly young as it wasn't very big, chilling in the tree with not a care in the world. He looked toward us dispassionately.

This was probably my best (of three) lifetime sightings of a leopard, but it still required the digital zoom on my camera to get a few good shots. We watched and marveled until another car pulled up behind us. We pointed out our find and moved on, content to let them marvel and watch.

The remainder of the drive was recounting how cool it was to see a leopard, interspersed with watching herd animals and then taking photos of the sunset. We arrived back at the lodge about 30 minutes before dinner. First order of business was to update the sightings board with our leopard! After that we relaxed and sat in one of the lounge areas soaking up wifi on our various devices. Just like college, sort of.

Dinner was better than lunch but not wonderful, but we had a lovely time talking and laughing and recounting. S and I went back to our room, took turns showering, and settled into our beds to read, distant hippo sounds helping to lull us to sleep. 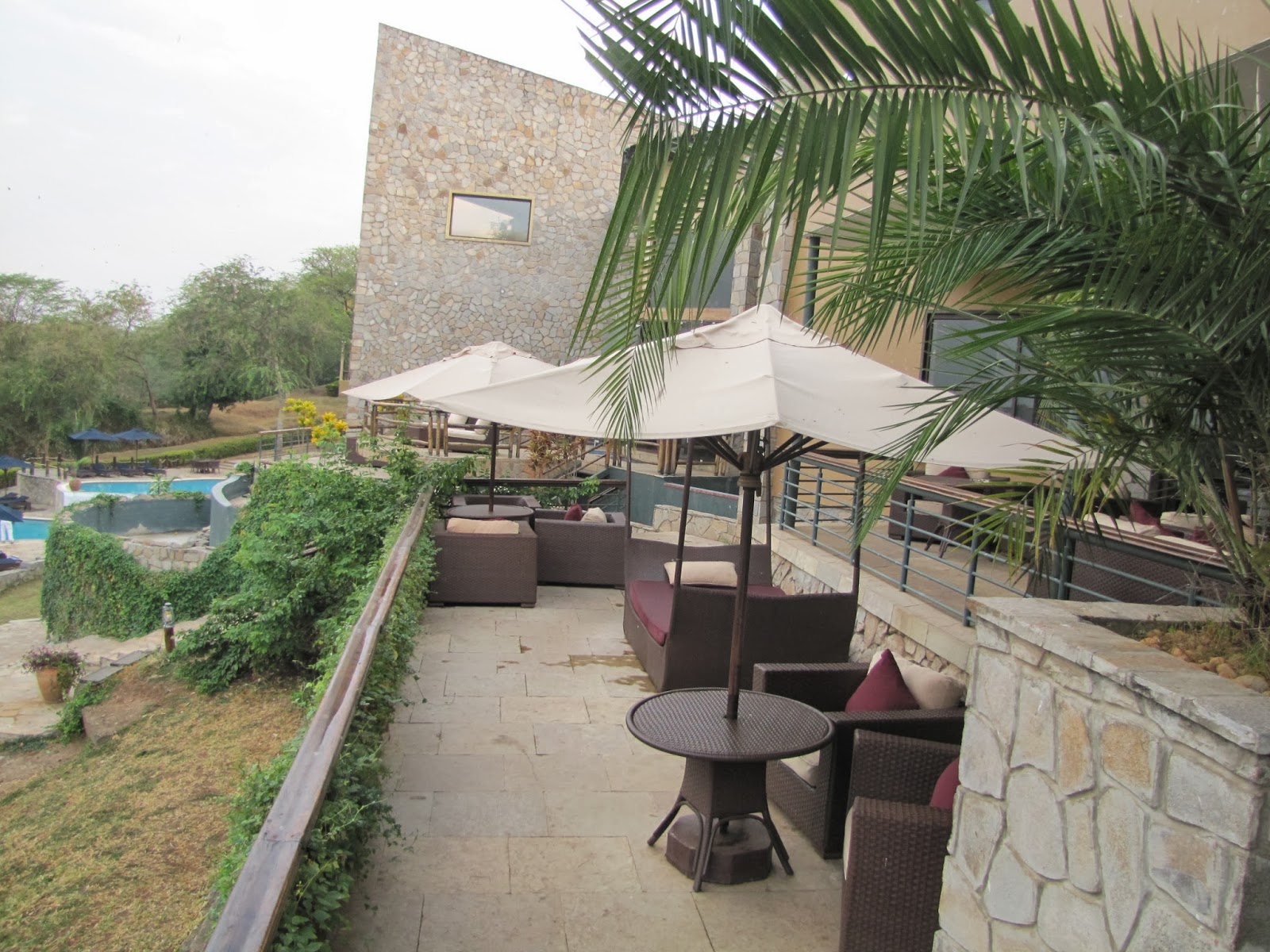 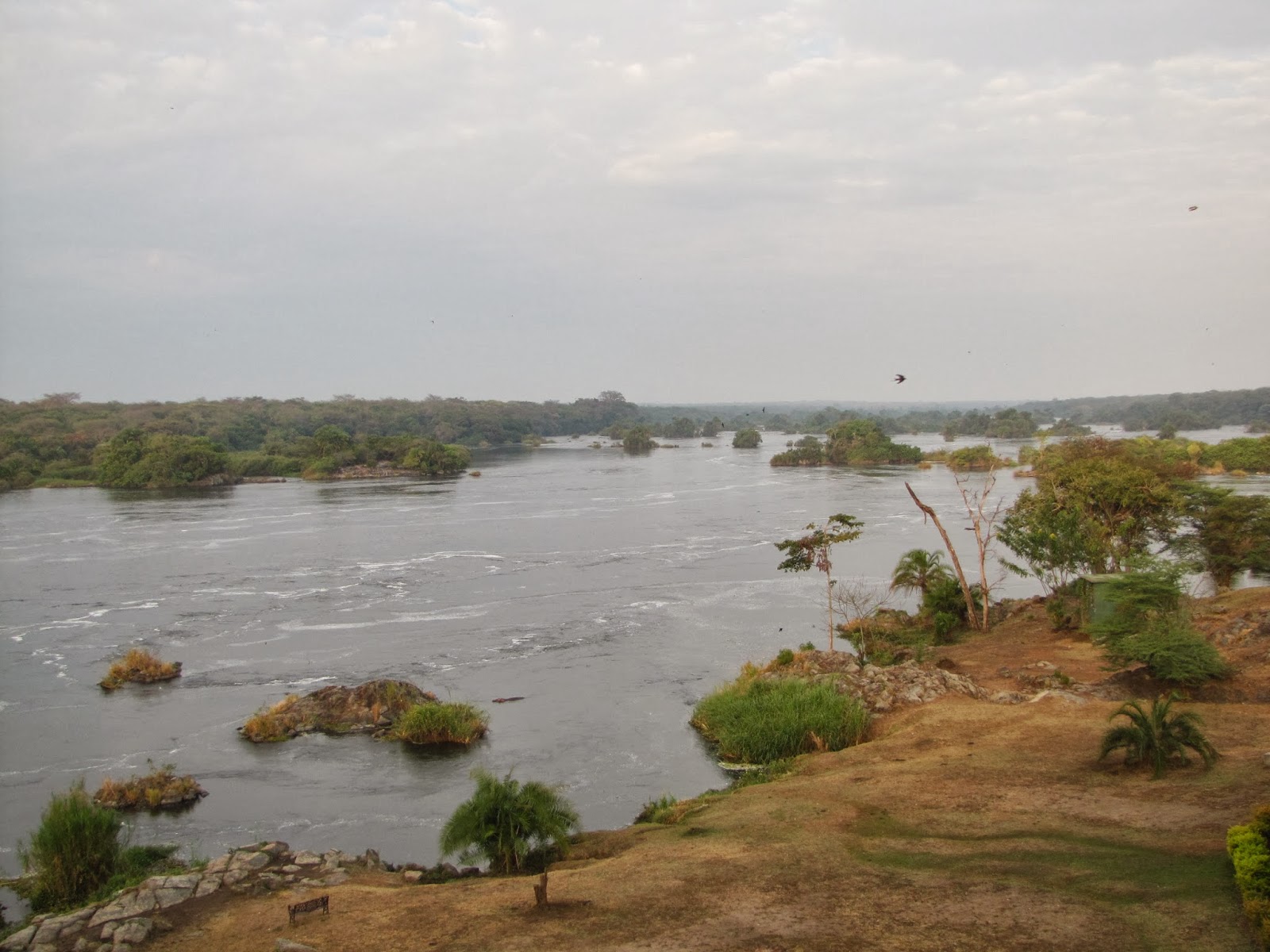 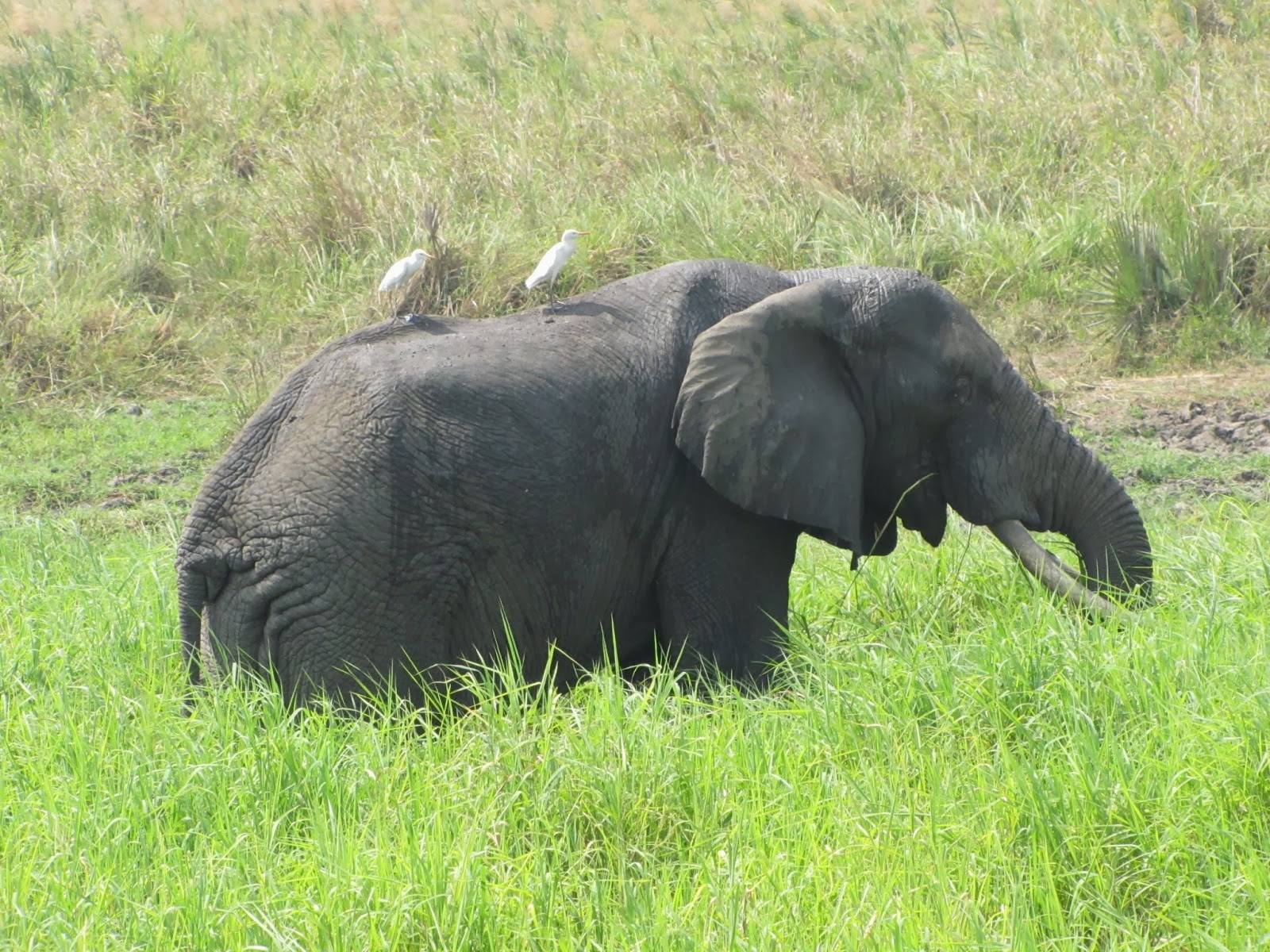 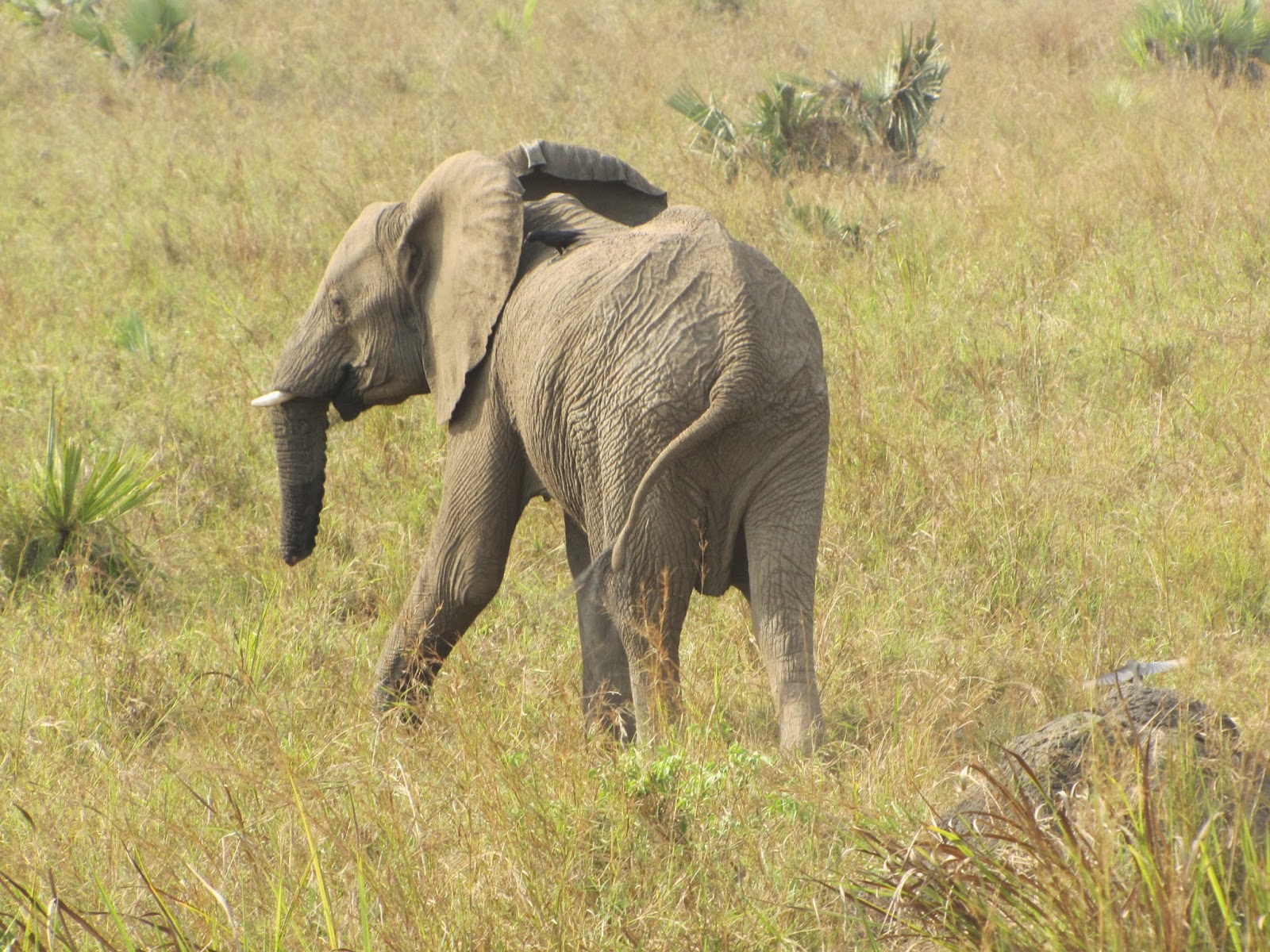 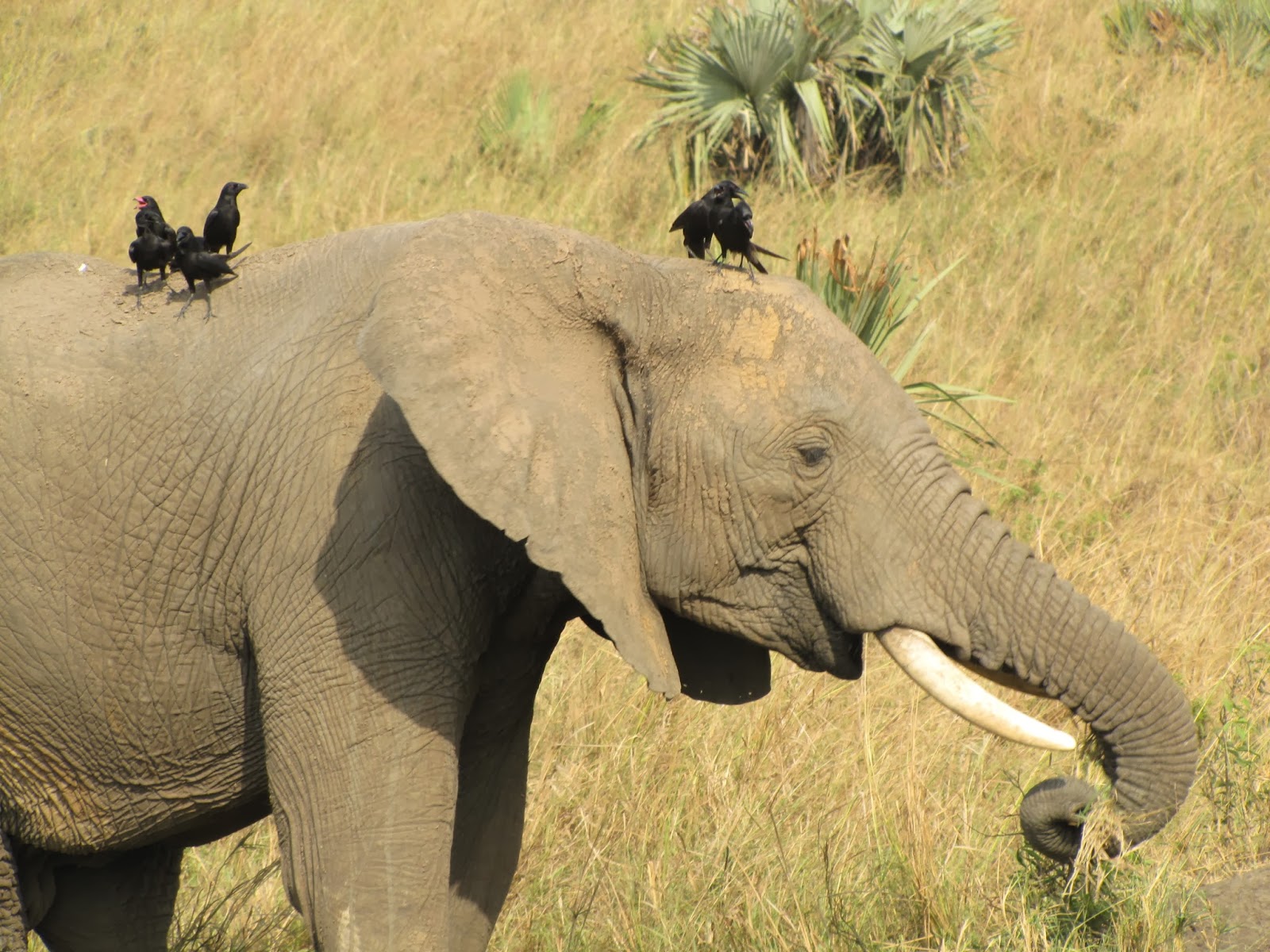 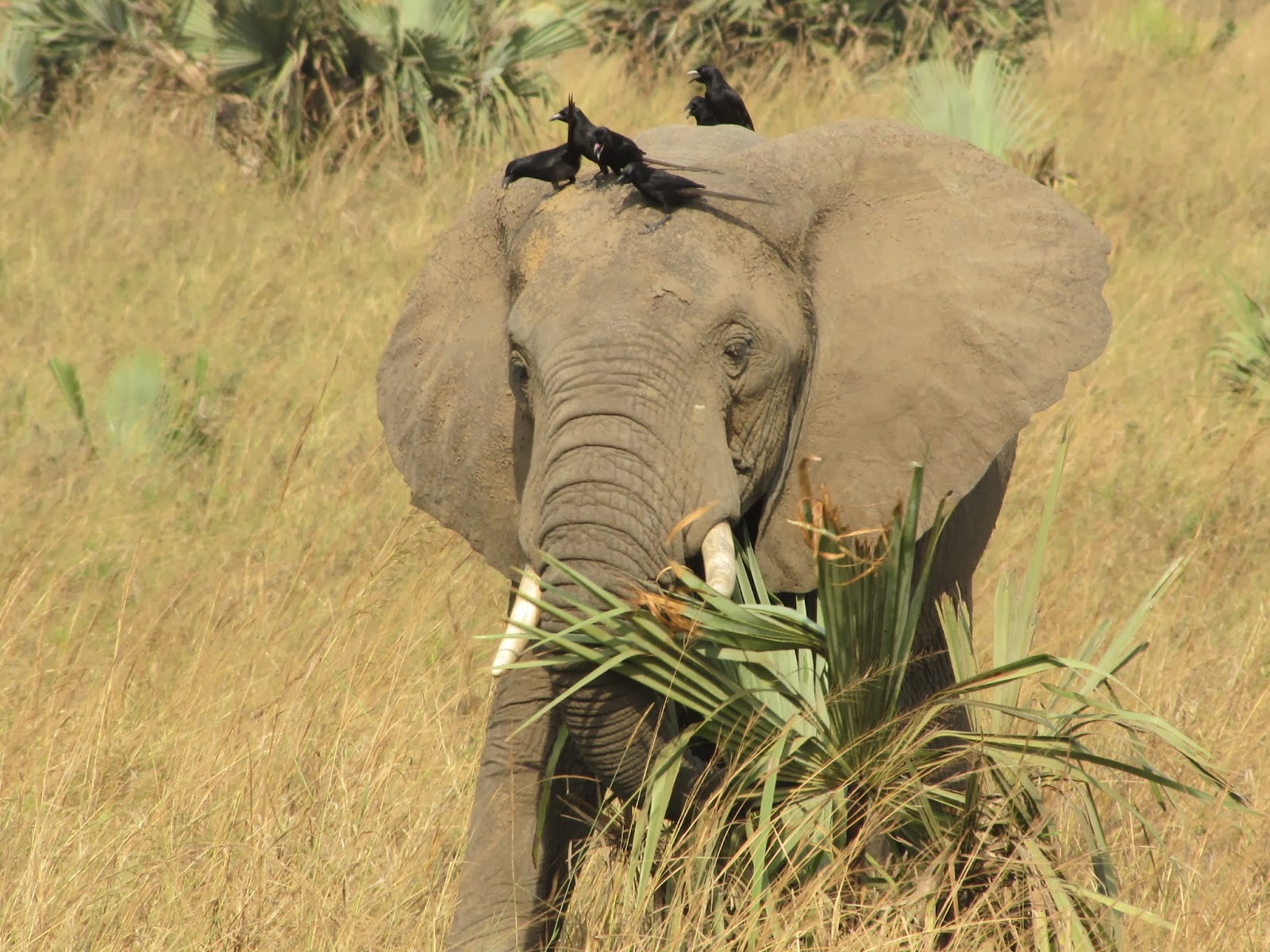 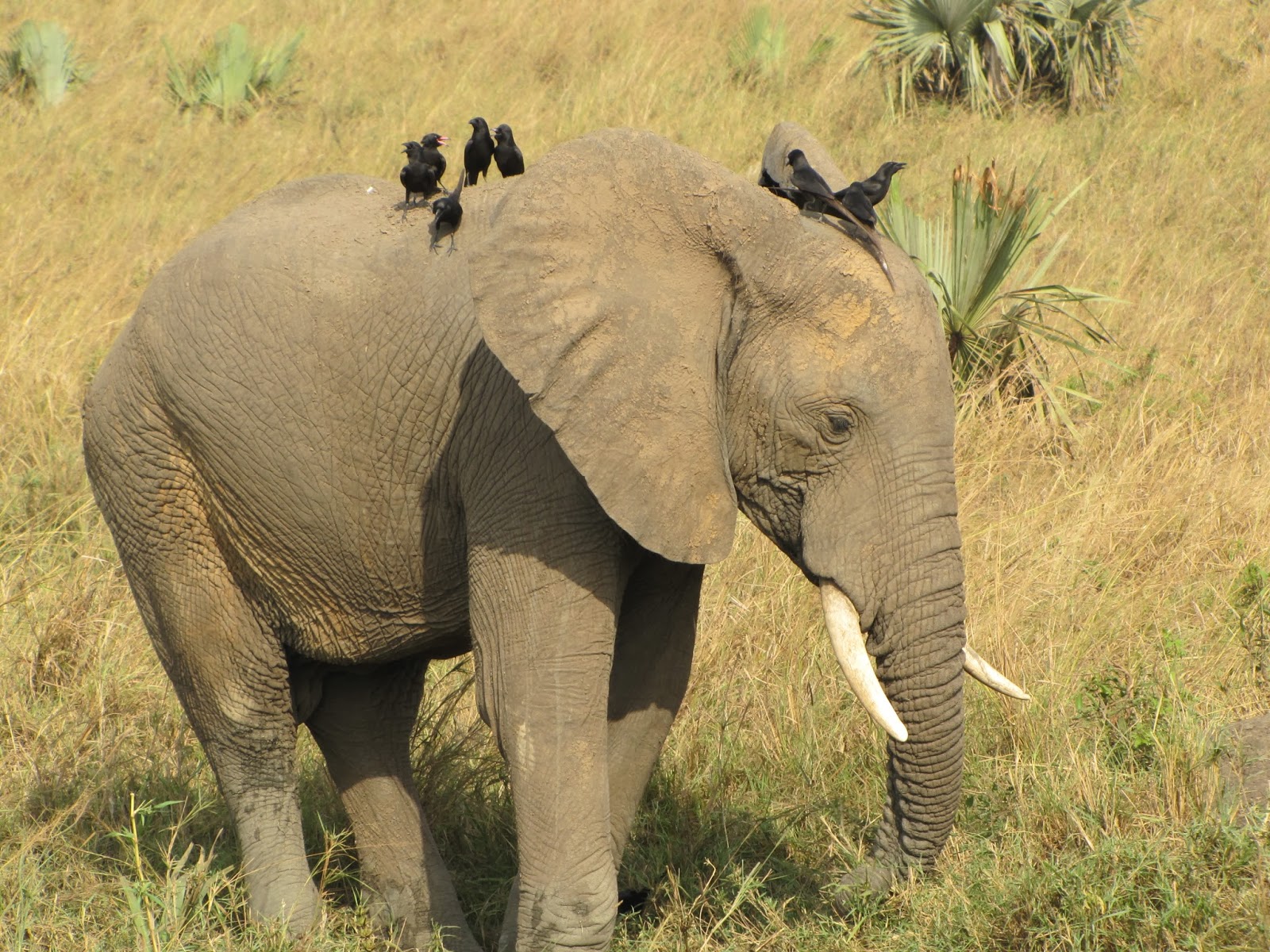 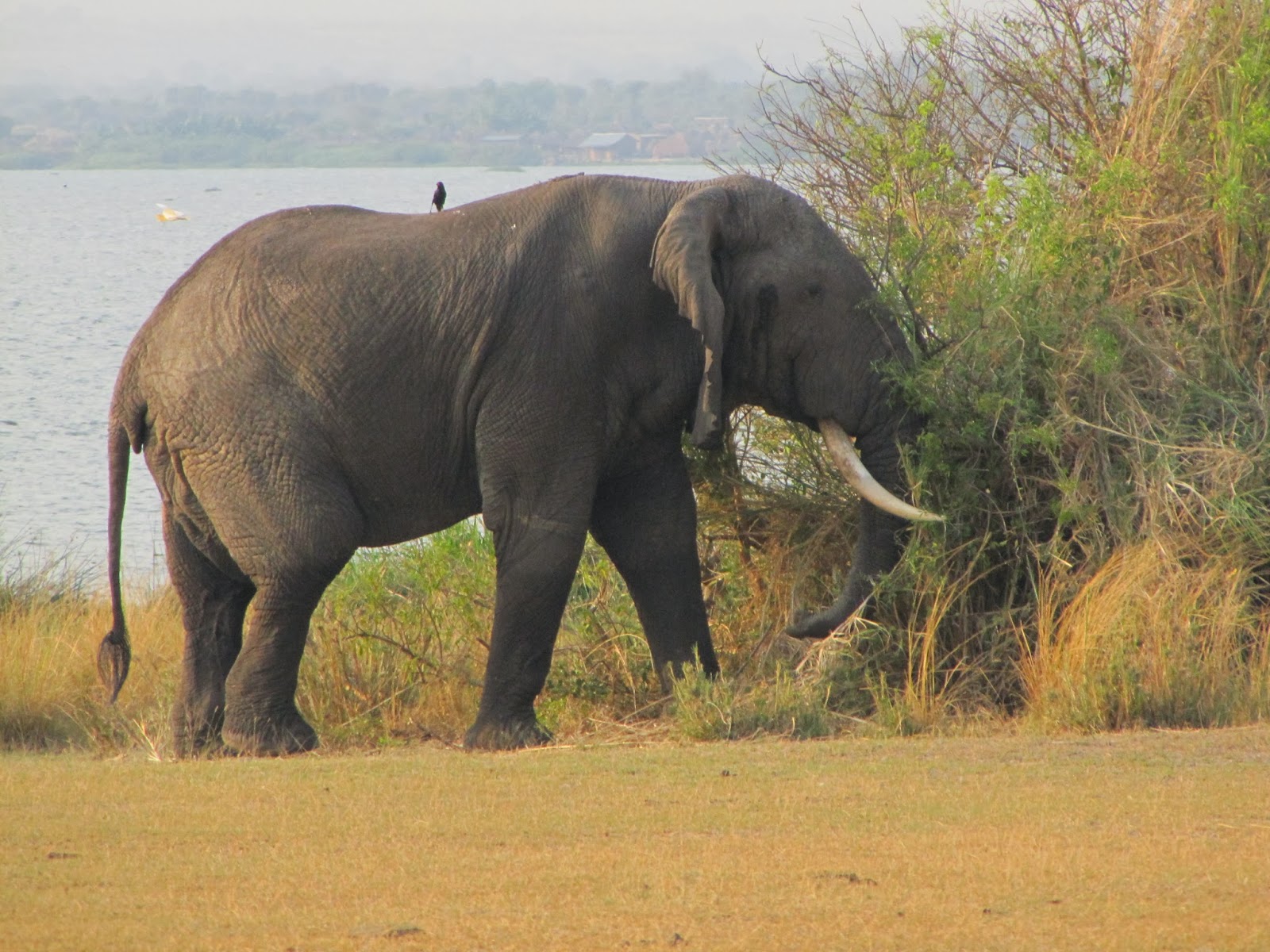 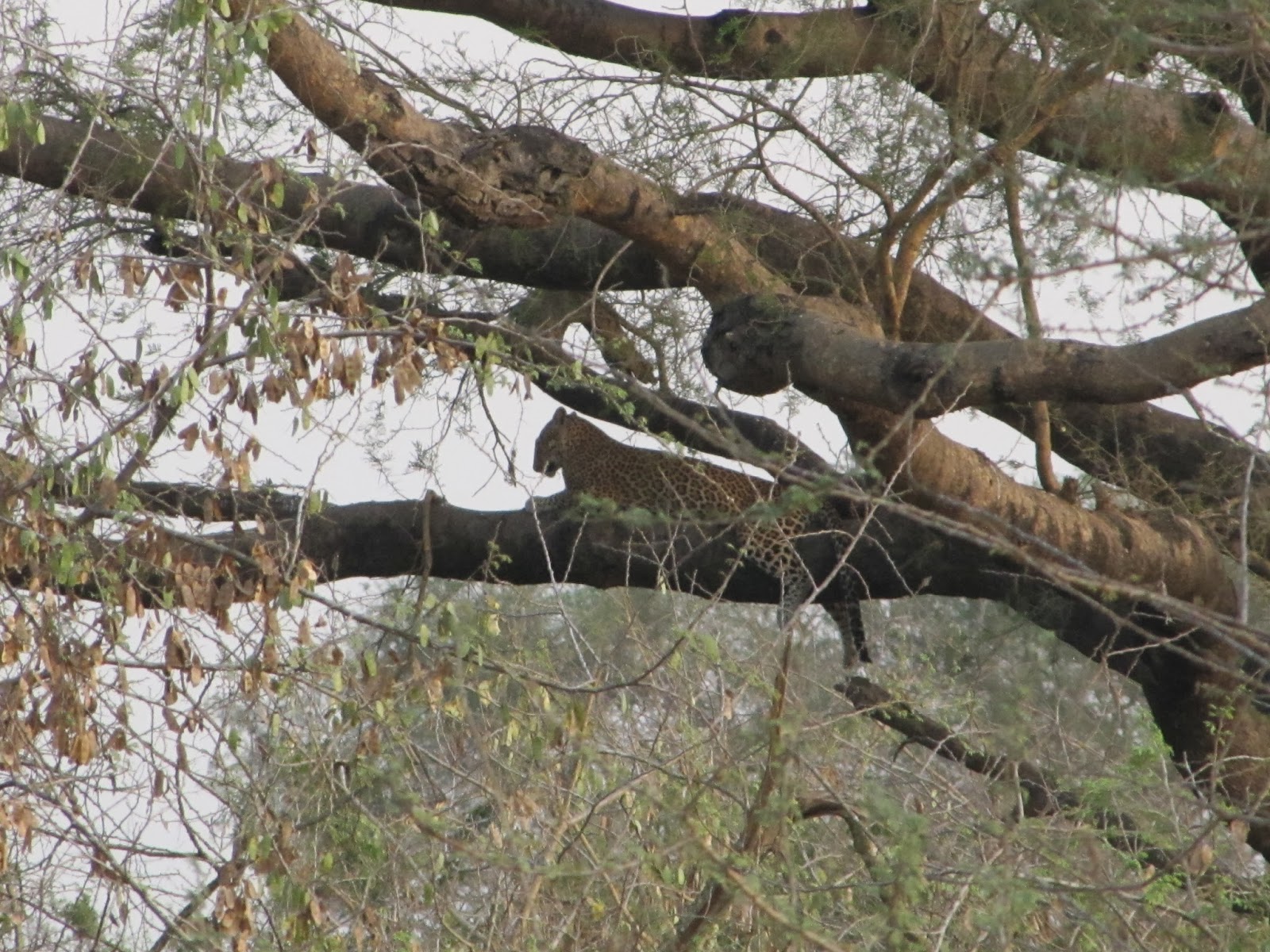 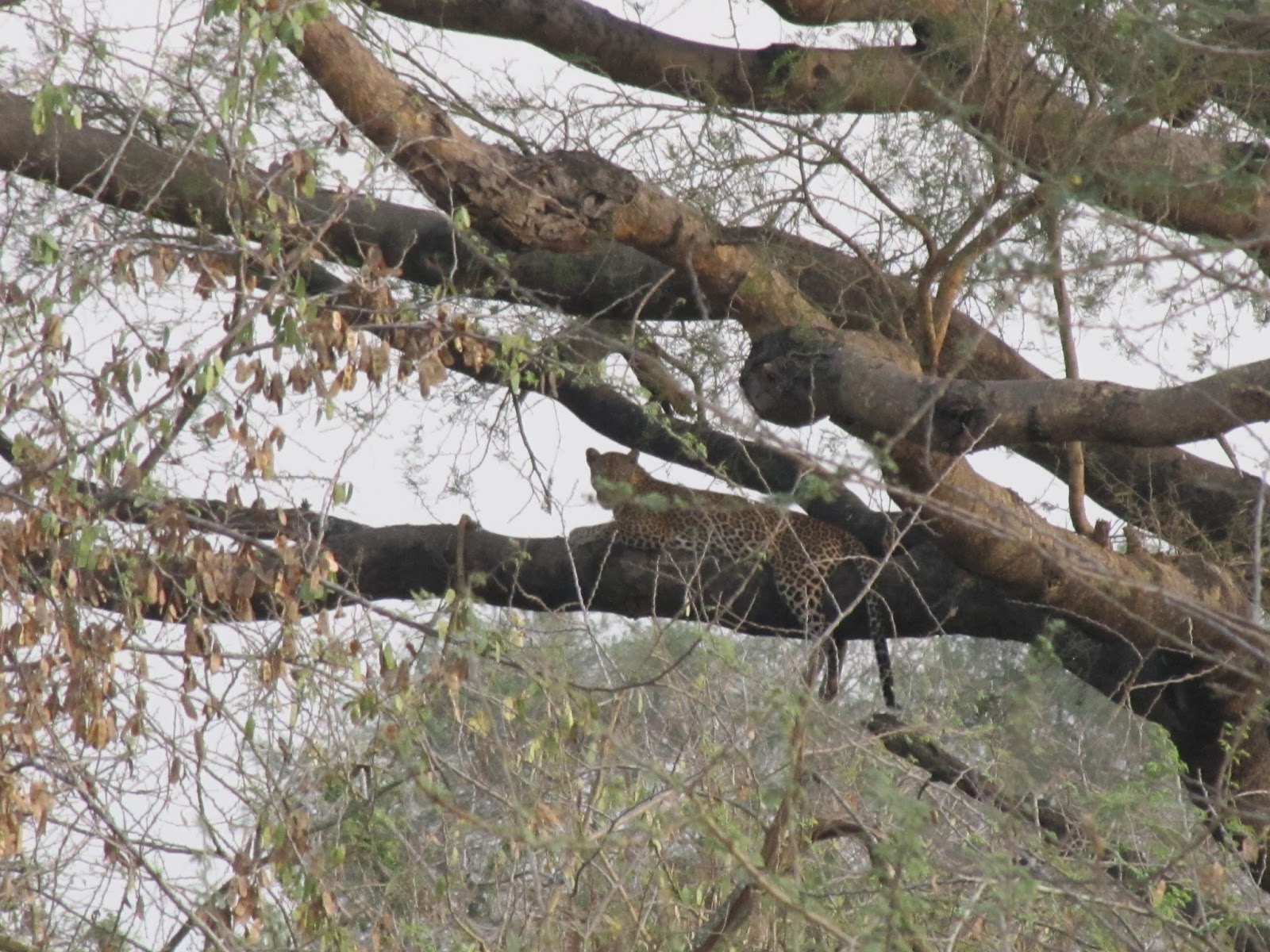 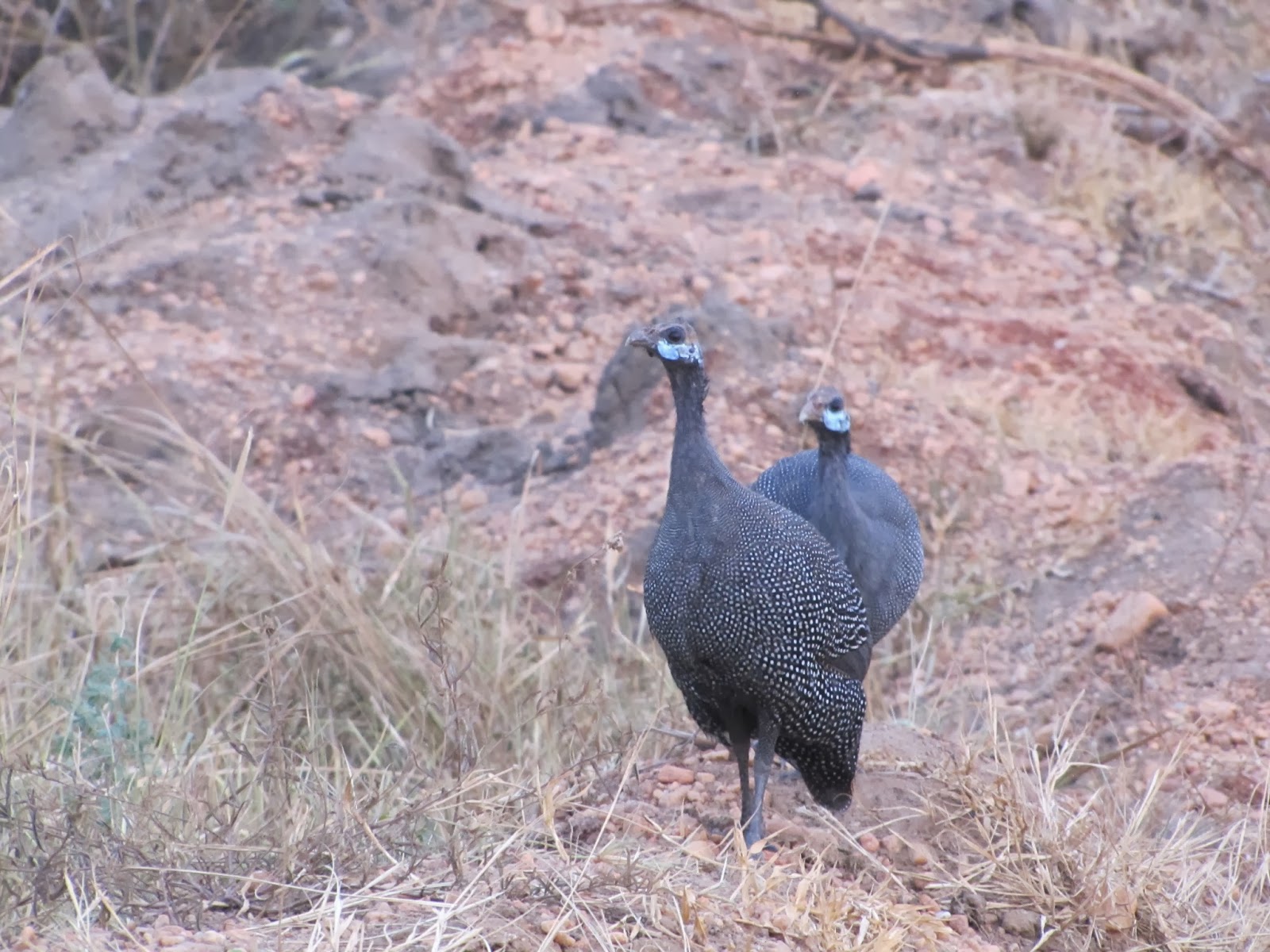 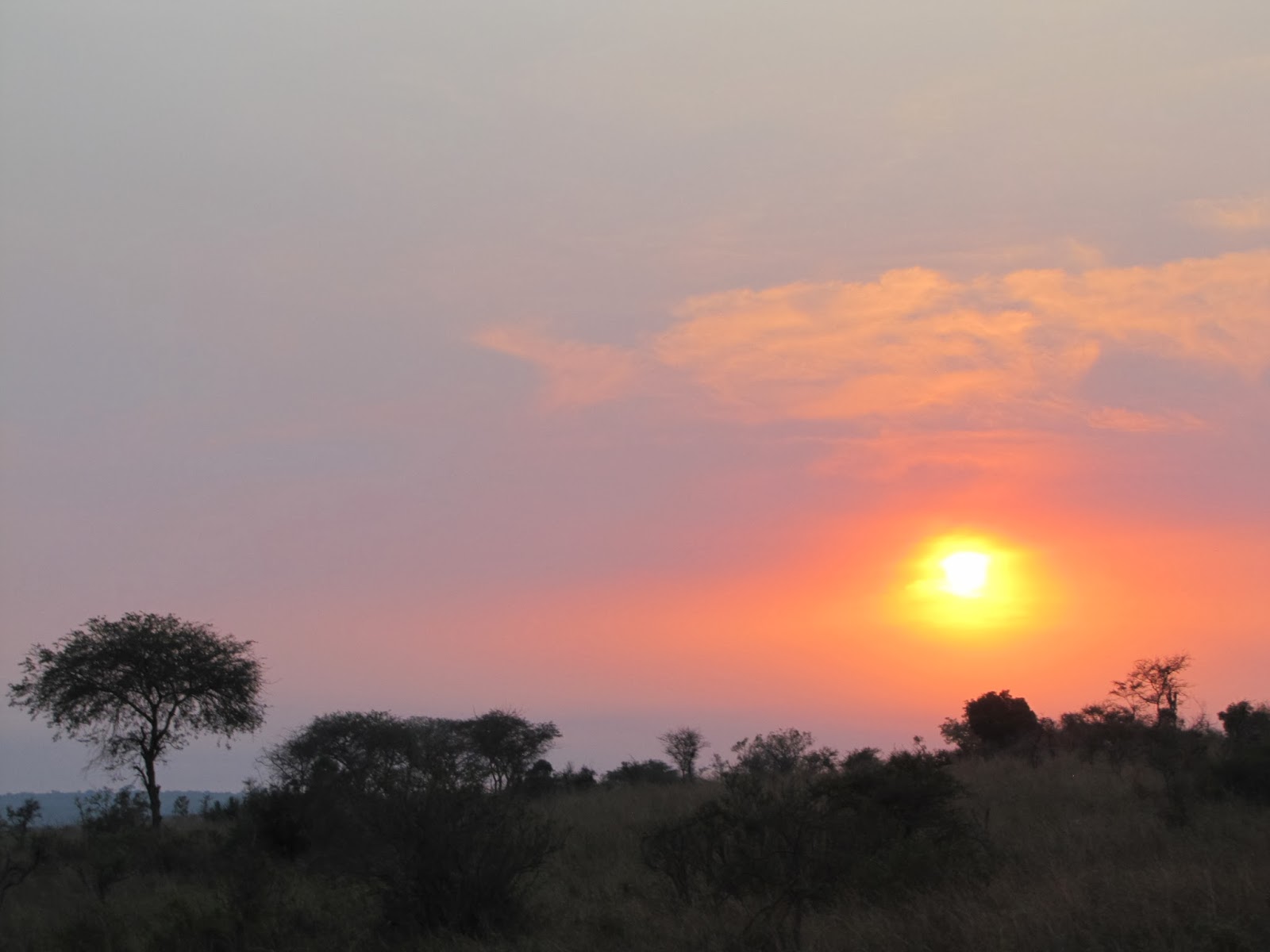