The afternoon was a slower, quieter game viewing adventure than the frenzied morning of predators shared with dozens of other vehicles, and for that I was thankful. We encountered pods of hippos, including one that built a nest near the bank for their little ones. My favorite birds - guinea fowl - routinely ran across our path, eluding good photography attempts but showcasing some adolescents.

A few shy reedbucks rested in the grass by a creek, and one brave reedbuck stared down a very surprised hyena. Both of them seemed startled to see the other, and it was a moment of no movement on either side before the hyena seemed to shrug and bound off in the other direction. What a fascinating scene to watch!

Five lazy male lions with very full bellies lounged on the banks of a waterhole, clearly tired and busy digesting that morning's meal. One of them was kind enough to pose with his reflection, though I can't find any of my photos with a perfect reflection minus reeds.

Warthogs and monkeys and buffalo and giraffes kept us entertained as we drove through different areas of the park. We found an area with rock kopjes and entertained ourselves spotting the hyrax and lizards and hoping to see a leopard. We saw some lions sleeping under trees, content to ignore us completely. Black-backed jackals on the prowl and marabou storks congregating had us excited about a possible kill, but there was nothing to be found.

We were starting to head back to the lodge and were driving at a decent pace when I saw something in a tree and yelled to our driver to stop. Sure enough, it was a leopard. It took a look back at us, thought a minute, and then climbed down and stalked off in the tall grass. It required binoculars/zoom lens to see, but it was our own private leopard.

As the sun started to set we saw more black-backed jackals starting to hunt, but we were on our way back. We got closer to the lodge and were passing the area where we'd seen the first leopard this morning, and I happened to glance up in the tree she had been in. And, there she was. With her very own gazelle. We stopped and watched for a few minutes, but the sun was not in our favor, and it was mostly shadows that we could see. But how neat to see that she actually had caught something, albeit she waited until she didn't have an audience. Smart.

A pair of female hyenas lounging in the road awaited us a bit farther into our return; one of them was nursing and clearly needed to get back to her pups soon.

And then we lucked out on a really rare find. We spotted two side-striped jackals, a mating pair. Our guide says he hadn't seen any in many years. They're plentiful but apparently rarely seen. I can't confirm that fact, but it was the first time I'd seen this type of jackal before. They're truly gorgeous.

After that it was really time to make our way back to the lodge, closing the roof as we drove through the tsetse fly area near the lodge. I really hate tsetse flies. And they're incredibly tenacious. They wanted into our vehicle in the worst way, and we were determined not to let them in.

We had a much more relaxing evening, taking a long time to eat dinner and then early to bed and ready for more adventures the next day. 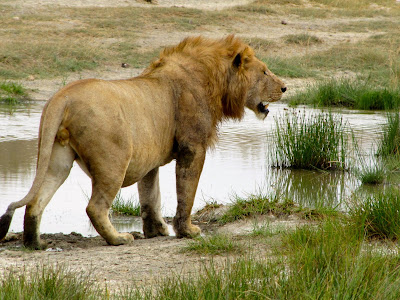 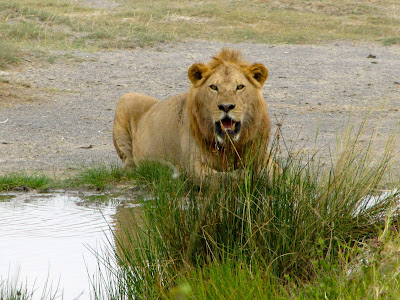 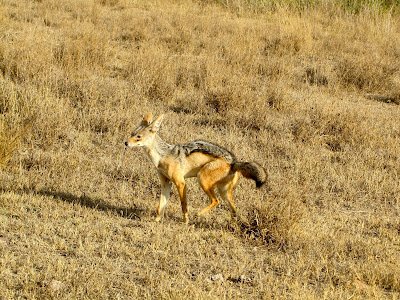 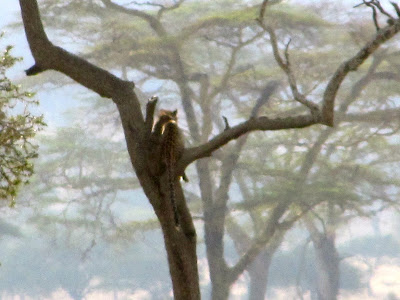 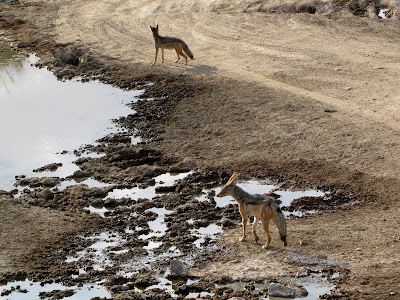 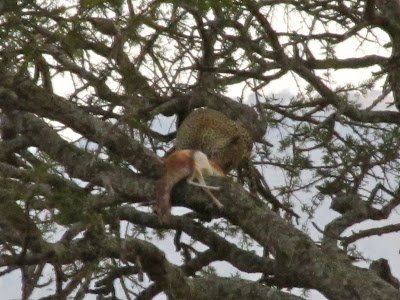