Well, clearly I failed.  I only wrote two of the 5-6 travel posts I meant to while on R&R.  But at least I got started.  More to come.

A few days ago I was sitting in the living room at home watching football with my parents.  I knocked on the stairs behind me (wood) and made the casual remark, "you know, I haven't been sick in a really long time."  My mother looked at me horrified.  But I knocked on wood!

And wouldn't you know, here I am, with a full-blown cold, about to fly back to Jeddah.  UGH. What started as a sore throat has blossomed into ickiness.  I'm well armed with a supply of zinc, ibuprofen, Nyquil, Dayquil, tissues, throat drops, and water.  And while I don't often take cold pills (I've never actually taken one of the -quils before), two long plane rides seem the best place to start.

I really only have myself to blame for this, after all...

Anyway, I'm on my way back to Saudi, energized for some projects at work and settling back into a routine.  Saying goodbye totally and completely sucked of course, but, for the first time in a long time, we actually know the next time we'll see each other.  And having that date makes it a little bit easier.

I had a great last day in the U.S., spending the morning presenting travel photos to a group of fifth graders at the school where I used to work.  They particularly loved the leopard photos from Yala.  Me too!  I spent the afternoon at my favorite day spa, my dad cooked beef stroganoff for dinner (yum!), and we all watched hours of MSNBC.

And then I got sick.

The good news is that my first flight appears on time, even with the horrific winds here in Boston.  I wouldn't mind a delay - I'd rather kill time in Logan with free wi-fi than in Frankfurt, where they trick you into going to a boring terminal to wait without shopping distractions.  Probably all the better; my bags are filled to the gills.  I didn't have to fight to get the bags checked free, for once, even without a hard copy of my orders (loooong story).  We had a harder time converting the expiration date of my residency card for KSA from Hijri to Gregorian calendar.  23.0kg and 23.8kg - way to go me!  I think that .8kg on the second bag was the luggage scale I threw in after packing everything...

The airport is eerily quiet today; I wonder if my flight will have some empty seats.  Oh, to sprawl!

All right.  Time to do the last-minute necessities before boarding.  Here's to a painless journey!
Posted by Sadie at 3:01 PM No comments:

We woke up at a reasonable time on November 6th excited for the day.  Our destinations:  Jerash and the Dead Sea!

Since it was Eid al-Adha, things were moving at a much slower pace, and many stores were closed.  As we drove the 40 km from Amman to Jerash, we witnessed time and time again roadside abbatoirs where pens of fluffy sheep waited to be purchased and sacrificed and then dressed for dinner.  Eid al-Adha is the festival of sacrifice after all.  We were whizzing by quickly enough that we didn't see too much gore, though a couple of my photos show the setup reasonably well.  Our guide told us that the price of a sheep is quite high - running several hundred dollars per animal.

Jerash is one of the best-preserved Roman cities in existence, and I'd had several people tell me it was a great place to visit.  Ruins are only so-so on my list of top sightseeing draws, so I had no expectations really.  And I was completely and totally blown out of the water.  Dating to about 63 BC, Jerash was an important city in the Roman province of Arabia.  It had its heyday of building in the early years of CE, particularly during Hadrian's visit in about 129 CE.

Over the next several hundred years, as the Roman Empire declined, a large Christian population moved in, converting some of the buildings into churches and even a cathedral.  Then the Persians took over in bout 614 CE, followed by the Umayyads, who added mosques.  A 749 CE earthquake destroyed much of the city, and some buildings were converted to fortresses during the Crusades.  Excavation and preservation really only dates to the 1920s, amazingly.  And even with all this turmoil and use of the city by many different populations, many of the buildings and monuments are recognizable and in decent shape.

All right, thank you Wikipedia for that history lesson.

Anyway, as we walked from the parking lot up the slight hill to the site's entrance, we were greeted by the majestic Hadrian's Arch, lit magnificently by the sun in the morning light.  Unbelievably picturesque and imposing.  And it got better from there.

We walked through the arch and explored the Hippodrome, which usually plays host to a gladiator show.  The Eid holiday meant no shows, which was a shame, since the idea, which had seemed tacky when I read about, of the shows was really growing on me.  Oh well.  Plenty to see.  We walked on towards the lesser arch, the real entrance to the city, and found ourselves in a large oval forum surrounded by a colonnade (Corinthian, as was the norm in Jerash).  We looked up the hill towards Zeus' temple, under renovation (though that didn't stop a herd of tourists from traipsing all over it).  Then we walked up to the south theater, the larger of the two in Jerash.  In amazing condition, this theater still has phenomenal acoustics and is used for performances.  We were treated to a show of pop song renditions a la bagpipe and drum by two entrepreneurial locals in full Jordanian-Scottish regalia.  Who knew?!  We explored the acoustics a bit ourselves, singing from the center and from slightly off center to catch the full effect before proceeding along.  We visited churches, what was probably a residential area, the smaller north theater, and then Artemis' temple, an impressive structure.  There we sipped mint tea, convened with the resident cat, and played who-can-move-the-column-with-a-spoon.  Quite fun, really.  We proceeded back down the hill to the colonnaded cardo maximus, the former main drag of Jerash.  We could see market stalls, the Nymphaeum, some small temples and gathering areas, and even the cart ruts in the stone from carriages of long ago.  The cardo brought us back to the Forum, and we made our way back to the parking lot for the next leg of our journey.

One of the reasons I chose this trip is that we would be driving everywhere, so I'd get plenty of road trip exposure.  We left Jerash, drove south through Amman, and then began the long to descent to the lowest place on earth - the Dead Sea.  I'd been to the Dead Sea on the Israeli side earlier in the year, but it had been too chilly to swim that day, so this was going to be my chance.  The air was a bit chilly, but as we descended from several hundred meters above sea level to 390 meters below sea level, the weather turned perfect for a dip.  The air and the water were both about 80 degrees, which I consider entirely tolerable.

After a so-so lunch, we all changed into our swim costumes and made the trek down to the sea, renting towels along the way.  As we walked to a quiet strip of beach we got our first glimpses of the mud treatments that so many of us had planned on doing.  I quickly changed my mind.  Somehow, I didn't expect the mud to be so... muddy.  And to pay $10 to coat myself in mud only to wash it off right away?  Yeah, no thanks.

We all waded in, carefully avoiding the rock-like salt deposits that made the entry slightly treacherous.  The water was a bit chilly but bearable.  I waded out far enough to try weightlessness and flopped onto my back.  Wow.  You hear the stories, you see the pictures, but it's not quite the same until you experience it yourself.  And I wasn't a huge fan of the sensation, though the experience was pretty amazing.  In the struggle to right myself, I, of course, managed to splash a bit of water in my eye.  OUCH.  I had no idea how much that would hurt.  It would take a full 12 hours for me to regain full use of the eye, even after countless fresh water eye showers.  Anyway, once I managed to orient myself vertically in the water, it was great fun, and I had a blissful time watching others don their mud costumes and then struggle to get it all off.  Several attempts at washing the salt off myself with freezing cold fresh water and a trek back uphill to the pool area later, I concluded my Dead Sea adventure.  Definitely a lot of fun!  And a mere 12 hours of eye pain was worth it in the long run :-).

We drove back to Amman after sunset, arriving to a very quiet city celebrating for Eid.  Our guide rightfully went to spend the holiday with his family, and most of our group trekked to a nearby kebab-ish restaurant for a noisy and yummy dinner.

The next day, we packed up our bus and headed out of the city.  We stopped at Mt. Nebo, of Moses fame.  The views were amazing - you could make out Jericho and the very edge of Jerusalem from this vantage point.  Then we headed to Madaba, a city with a long tradition of mosaic-making and home to several famous Byzantine and Umayyad mosaics, including the Madaba Map, which depicts the biblical cities of the region.  We visited the map, which was quite interesting to see, as well as a mosaic factory.

From there we headed south along the famed King's Highway towards Wadi Musa and Petra.  For lunch we ate the spoils of our grocery store adventure from that morning in a Bedouin tent overlooking the beautiful Wadi Mujib.  We stopped at the famous Crusader castle at Kerak, which was amazingly well-positioned and well-preserved, the former accounting for its success as a fortress for many years - right up until it was finally invaded by Saladin in 1189.

We arrived at sunset at our hotel in Wadi Musa, too late for a visit to Little Petra but in time for a few intrepid members of our group to experience Petra by night.  As scenic as it sounded, I just wasn't up for a candlelit hike the night before a long day of walking and hiking.  Those who went enjoyed it; those who didn't felt good about their decisions.

After dinner and a shower, I went to bed as early as possible, preparing for an early wakeup call and a day at Petra. 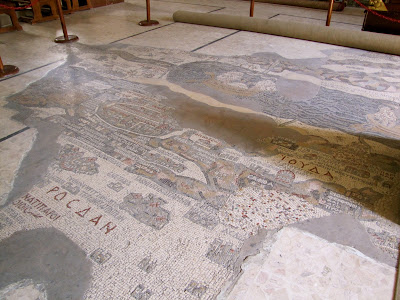 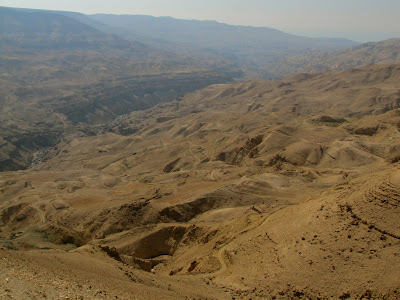 It took me almost all of R&R, but I finally caught up with all of my blog reading.  Yesterday.  And then, today, there's only two new posts in all the blogs I read!?  Joke's on me, I guess.  It's the Sunday of a long weekend.  Perhaps that accounts for the lack of posting.  Cuz it's definitely not karma for not catching up on my own writings...  Right?
Posted by Sadie at 8:52 PM No comments: