I love London.  Like really, really, really love it.  And I forget that a lot but remember it instantly whenever I go back.  Well, maybe not instantly.  At least not this time, when I had to wait for almost two hours in the line for Immigration.  But as soon as I stepped through the final doors and breathed in the orderliness that is Heathrow, I was there.  I found my driver (who was even less happy than me about the two hour delay), and we were off!

I stayed at a hotel literally around the corner from L's new flat, in the lovely Swiss Cottage area.  My room was not quite ready at 9am (imagine that), so L just brought me to her house, where her extended family was also staying.  We had a lovely morning catching up and lazing about, and then we headed out for the afternoon.  After a delicious lunch at a cozy Vietnamese restaurant (pho! how I've missed you!), we had a lovely spa treat of manicures and massages.  The blissful relaxation was jolted slightly by the now massive downpour we walked out into, but we finished the remainder of our (more mundane) errands and headed back to the flat.

After a delicious dinner of homemade Indian fare, we joined L's sister-in-law for a henna party.  This was my first time having it done, and I absolutely loved it!  N was a phenomenal henna artist, and I have been able to enjoy her artwork ever since - it's only now fading away.  I couldn't believe I made it through the full day without falling asleep after taking an overnight flight, but when I finally (carefully, so as to not disturb the henna) laid down in bed, I fell asleep fairly quickly.

The next day was pretty awesome.  L's parents, who were in town for a few days, came over in the morning, and we met up for a long, luxurious, delicious lunch with a lot of other friends, most new to me but with some familiar faces I'd met on previous trips to the UK to visit L.  It was a beautiful sunny day, which just added to the celebratory atmosphere.

I had a low-key evening, skipping a hike up Primrose Hill for a wander down the high street, a wander through the M&S food hall (oh how I miss this from my Cape Town days, the Woolworths version), and a casual but delicious dinner from Subway.  I know, why go all the way to London to have Subway, but I was just so excited to be able to get a ham sandwich!

The next morning our group of eight headed to Paddington Station, where we caught the train for Windsor.  We were not the only ones who had the same idea on a beautiful Sunday, as the trains and town were packed.  We queued for tickets to Windsor Castle, which was, thankfully, much less crowded once you entered the grounds and spread out.  The Queen was not in residence while we were there; she was expected back later in the afternoon, but we never did get to see the flags change, sadly.  Windsor Castle was pretty amazing, both the grounds and the State Apartments.  I was very impressed and fully and totally in my element as a self-professed Royal-phile.

Lunch at Wagamama was warm and filling (still sunny, it was quite chilly, especially for those of us used to warmer climes), and then we wandered the shops for a while before heading back to London.  We sadly bid L's parents goodbye, as they were heading on to the country for a holiday.

I dragged L and N to the nearby cinema that evening to see the Hunger Games, even though neither one had read the book yet.  I absolutely loved the film and thought it was true to the book.  The others enjoyed it, even though I don't think I adequately prepared them for the subject matter...

The next day, L very patiently tagged along while I created a perfect London day.  We went first to Leicester Square to try and score tickets to the Lion King.  We clearly didn't do our homework, as there was no show that evening.  Sad!  None of the other shows were ones we were dying to see, so we walked on to Piccadilly Circus.  There, we indulged in something I've always wanted to do but never had the time to:  a London tour in a big, touristy, red, double-decker bus!  L was skeptical but agreed to it.  And even though it started raining the moment we boarded, so we sat in a covered area where windows slightly obscured our view, it really was great fun!  I want to go back and actually hop-on, hop-off sometime.  Even L, who has lived in and around London for much of the last six years, learned a great deal of fun trivia.  We did the full 2.5 hour tour without getting out (the weather was quite terrible), and by the time we returned to Piccadilly Circus we were pretty much frozen.  And that's saying a lot for two NH girls!  We had wanted to see the changing of the guard, but that event was also not scheduled for the day we were there.  Oh well - more reason to go back!

We walked to a cafe and had a snack and warmed our extremities.  Thus fortified, we headed to our next stop:  Fortnum & Mason.  I had never actually been to the flagship store, and it was quite an awesome experience.  I filled my basket with entirely too many goodies, and we had great fun coveting the super-expensive housewares and china and silver and hats and other wonderful things.  I just loved the color scheme so much - I am very much a teal person :-).

We paid for our purchases and headed out to our most important appointment of the day - afternoon tea at the Wolseley.  Wow.  I absolutely adore afternoon tea (those crustless finger sandwiches! scones with clotted cream and jam!), and this did not disappoint.  It felt very decadent and had perfect ambiance for our outing.  We finished up with a quick trip to Accessorize and then headed back to Swiss Cottage.

We had one last wonderful home-cooked by L's mother-in-law meal, and then came the tearful goodbyes.  I returned to my hotel, sadly packed my belongings, got a good night's sleep, and then headed for Heathrow in the morning.  I had a quick breakfast, spent entirely too much time and money at Harrod's airport food hall, and then boarded my almost-empty flight back to Jeddah.  Sad to leave L and her family, sad to leave London.  But happy the city isn't going anywhere.

Below are a few photos, mostly of Windsor Castle and environs.  Photos from the bus tour were difficult because of the windows/rain, but there are a few. 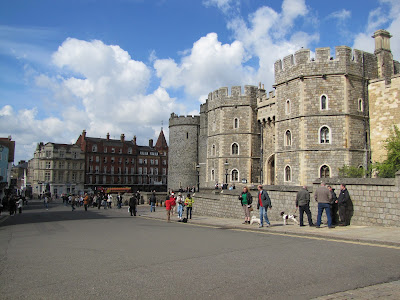 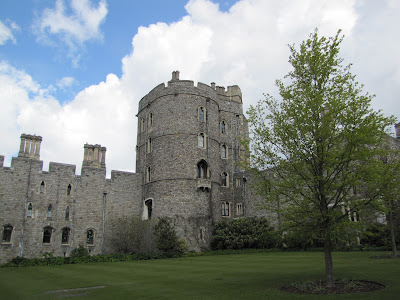 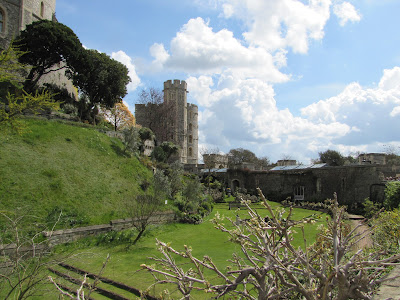 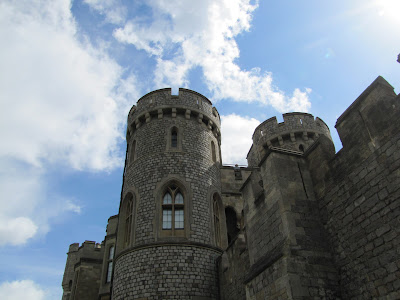 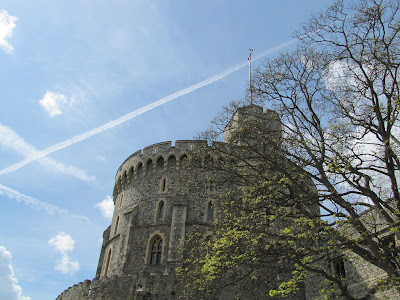 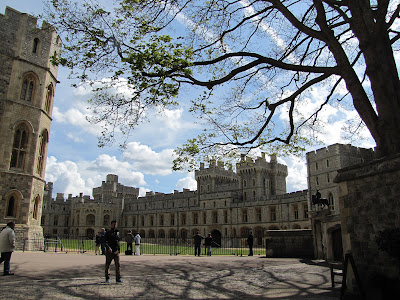 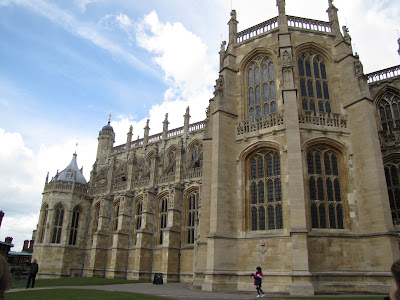 I'm going to step onto my soapbox now.  I'm in the middle of several other posts, but there's something that just needs to be said right now.  And that is:  nipple.

Now.  If you are among the FS blogger community that makes up the vast majority of my readership, you know exactly what I mean by that.  For those who don't, it means that I am standing in solidarity with one of my own - a fellow FS blogger.  And not just any FS blogger, but one of the pioneers of the FS blog.  One of the leaders in the FS community, online and off line.  A woman who I consider a friend, despite the fact that we've never met.  But, she's invariably been there for me when I've needed her, even (especially) when she's needed support even more than me.

This week, Jen discovered that she is "not FS enough" to represent the FS on an official blog roll used as a recruitment tool.  (A blog roll I've chosen not to be on, for various reasons.  None of them have to do with not wanting to recruit people.)

Jen has detailed what happened very well herself.  And on this post she links to others who have done the same.  I won't rehash everything here (especially since the majority of you know the story anyway).  If you don't, follow the links.

The reasons she was given are simply laughable.  Especially because the same could be said for every single other blog on that roll (and the many, many more who aren't).  We are taught from day 1 that the FS isn't a career, it's a lifestyle.  And so it makes sense that everything that happens to us, good or bad, is part of that lifestyle.  And there's a whole lot of good that happens to all of us.  But there's a hell of a lot of bad, too.  And all of it is inextricably intertwined with our lifestyles.  And any prospective member of the FS family should be inspired by these stories, not scared of them.

I am not the first or the most eloquent to post about this injustice, and I won't be the last (or, hopefully, the least eloquent!).  Because we are a community.  We stick together.  We make our own corner of FS life more fun.  Sometimes more bearable.  Sometimes we kvetch.  Sometimes we brag.  Sometimes we cry.  Often, we laugh.  With both of the most difficult experiences I've had in my short FS career - the death of my beloved Hattie and my mother's recent brain aneurysm saga - the FS blog community has comforted me, grieved with me, exhaled with me, and made me realize I had a community.  I think every other blogger has had similarly positive supportive experiences.

I've only met a few of these people in real life, but I look forward to upcoming bloggy get-togethers when I'm back in DC this fall.  The one I-know-you-from-your-blog meet-up I've had was pretty awesome.  And I know the rest will be too.

Because, after all, the FS blog community is pretty darn nippletastic, if I do say so myself.