I've always had Morocco on my list of places to visit (granted, pretty much the whole world is on that list), but it was a back burner kind of place. I figured I'd get there when I got there. Enter the need to get away from Beirut for a short time in January and the ease of a direct flight and a tour that lined up with my dates, interests, and price range, and voila! Morocco in January.

The tour began on a Thursday, but the way the flights worked out I had to either fly Monday night or get in super laterThursday night. My boss was amenable to the extra days (thanks C!), so a longer stay it was. I initially had grand plans of going to Tangiers, and Gibraltar, and Chefchaouen, and I still want to visit all three places, but the timing just didn't make sense, especially on my first days in a new country. So I decided to have a relaxing few days in a nice hotel.

The flight was fine in retrospect, though the lack of entertainment was a bit annoying. I sailed through customs and immigration, but my transfer wasn't waiting for me. Turns out they were in another terminal, and I didn't know there was another terminal. They found me eventually, and the drive to the hotel was fairly quick. I checked in, ensured breakfast was included in my rate, checked in with my parents, and slept.

Tuesday was a day of rest and recuperation, bookended by a lovely breakfast and a very tasty dinner. I took advantage of reliable internet and updated all of my software and all those other important things that fall by the wayside when internet is awful as well as indulged in a nap. I was a bit disappointed at dinner to find that the entire menu relied extremely heavily on truffles and foie gras, two foods I really hate. But I was able to eat around these ingredients and have a lovely meal.

Wednesday I ventured out and visited Hassan II Mosque, the third largest in the world (after those in Mecca and Medina) and absolutely gorgeous inside and out. I arrived too late for the last morning tour so instead had lunch before doing the interior tour.

Lunch was at Rick's Cafe, which was highly recommended to me by friends who served in Casablanca. I've never actually seen the move 'Casablanca' so much of the nostalgia was lost on me, but the ambiance and service were superb, and the food was fabulous. I had a delicious duck breast with puréed celery root - so tasty!

I arrived a bit early at the mosque for the afternoon tour but had plenty of time to wander around and take exterior photos and marvel at the cats and the architecture and the views of the Atlantic. The mosque, completed in 1993 after only six years of construction, is built on a site partially reclaimed from the ocean and was funded in large part by public donation. The overwhelming majority of the materials, including the marble and cedar wood, are sourced from Morocco, and it's a remarkably stunning building.

Our tour guide was a lovely woman who stayed uncovered, an example of Morocco's moderate stand on religion and freedom of personal choice. She was a great guide, giving all the stats and facts but also some fun stories and anecdotes. We had time to wander the giant prayer hall (which can accommodate 25,000 worshippers) and admire the extreme attention to detail in the carvings and ceilings and decor. The roof is retractable, and I'd love to see it open and with natural light. Only a few of the opulent Venetian glass chandeliers were lit, and it would be fascinating to see them all fully lit as well.

After the prayer hall we visited the ablution room and the - to date unused - hammam before the tour ended. I took a taxi back to the hotel and had a simple room service dinner. Tomorrow - to Rabat! 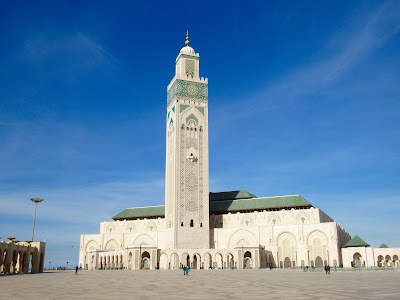 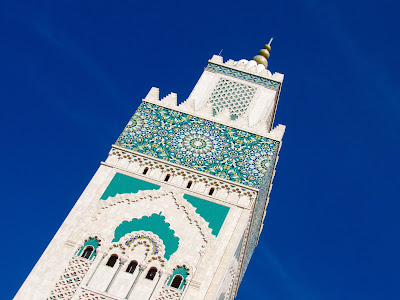 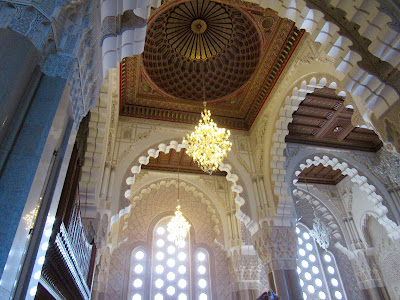 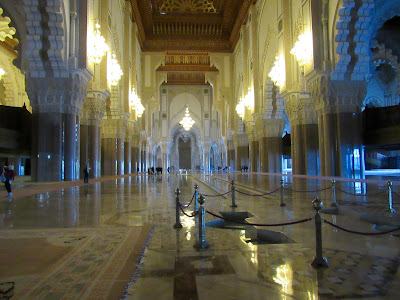 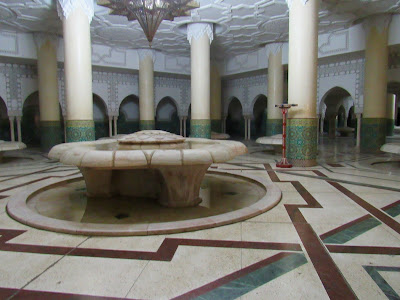 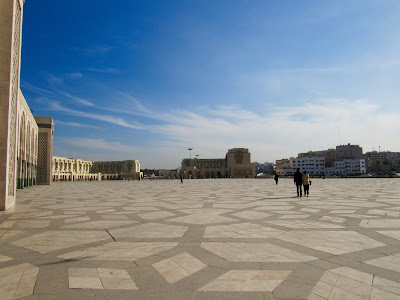 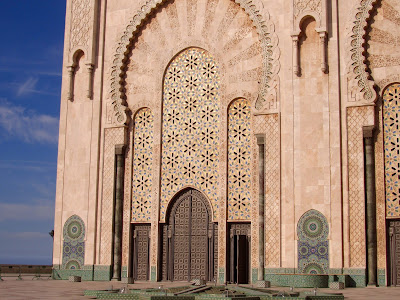