All right.  With just a couple days left in the U.S. (again), it's time to finish Jordan's posts!

The day after visiting Petra we woke up, packed out, and went for a scenic drive above Petra and then to Little Petra.  Little Petra is more of the same of Petra in a much more accessible place.  We were impressed but didn't have the desire to stay for a long period, so south we went.  Today's destination - Wadi Rum!

I love the desert.  Some of my favorite memories are from the Kalahari and Namib deserts in Southern Africa, looking at the stars and listening to the unique sounds of the desert at night.  So I was thrilled to spend a couple days in the fabled Jordanian desert, experiencing Bedouin hospitality.  This is the desert of Lawrence of Arabia fame (someone I knew very little about before this trip).

We arrived shortly before lunchtime at our staging camp, a large area with goat-hair tents, several campfire areas with surrounding majlises, a dining tent, and pristine bathrooms.  I could go on and on about the bathrooms.  These were, by far, the best camp bathrooms I've ever seen.

After a pleasant light lunch of salads and hummus, we embarked on our 4x4s for a half day 'jeep' excursion into the desert.  The 'jeeps', mostly a collection of Toyota pickup trucks with benches fitted into the beds, were atmospheric if not the most luxurious rides.  We slathered ourselves with sunscreen, fitted hats and scarves on tightly, secured our sunglasses, and we were off!  After a scenic drive through a nearby village, we were soon well away from civilization and surrounded by dunes and amazing rock formations.  And camels!  We did a bit of dune riding, which was exciting and heart-palpitating, but mostly we just drove and marveled.  And as one of my companions so cleverly noted, we kept making turns through the sand instead of going straight.  Why?  There was no reason we could fathom.

One of our three jeeps got a flat tire, so those passengers doubled up on the other jeeps while we waited for a replacement to come.  The extra people meant some were standing, which contributed to wonderful photo opportunities!  We were joking about an hour into the ride that it was time for a tea and trinkets stop, both of which were readily available wherever and whenever we stopped somewhere.  Sure enough, we rounded a large rock mountain and found a goat-hair tent, its occupants beckoning us in for mint tea.  A table displaying trinkets stood nearby.  We laughed.  For me, though, the really neat thing about this stop was seeing the rock carvings on the mountain.  Apparently Nabataean and put there to direct camel caravans, they were absolutely beautiful.  Very similar to the carvings I've seen in South Africa, though the animals depicted were quite different!

Once the replacement jeep arrived, we loaded back up and headed out again.  While the whole afternoon was wonderful, I was a bit disappointed that there were so many other jeep caravans in the same spots we stopped in.  It detracted a bit from the 'being out in the middle of nowhere' feeling we were trying to cultivate.  Not to worry, that was still to come.

We stopped a few more times at natural rock formations that were great for exploring and photographing, and then we set off to find a perfect spot for sunset.  We did, and as our drivers built a fire for, what else, mint tea, we bundled up against the cooler temperatures and watched a spectacular sunset.

Our drive back to the staging camp was cooler and darker, but it just gave us time to watch the full moon rise over the horizon and the stars come out.  As we pulled into the camp we were greeted by dozens of lights illuminating the rock mountain behind the camp.  What an amazing sight!  We watched our hosts unearth dinner - literally, it was cooked underground - and then settled in for a pleasant evening of good food and Bedouin music.  And then, for some reason, a disco.  They plugged in amps and speakers and started playing pop music.  Loudly.  We opted to head off to our night camp then.

We piled into two jeeps with our overnight bags and set off on the 30 minute journey to our rustic but comfortable tented camp, a semi-permanent private camp of goat-hair tents.  With the full moon and a sky full of stars (and our group full of laughter), it was a wonderful ride.  We settled in and then relaxed around the fire for a while.  A nearby sand dune provided great fun as several people climbed it and proclaimed themselves kings and queens of the Wadi, with the full moon shining high above them.  The beds - simple frames and thin mattresses - were well appointed with heavy blankets, so sleeping was a cozy affair.

I woke the next morning, hurriedly dressed in the chilly morning air, and then emerged from my tent to find that our camp was in a truly magical setting, nestled at the juncture of two rock mountains in a perfectly sheltered little cove.  It was spectacularly beautiful.  What had seemed neat the night before was absolutely breathtaking by day.

We headed back to the staging camp for breakfast and then headed out for points south.  On our way we stopped to photograph Lawrence's famed Seven Pillars, for which he named his autobiography. 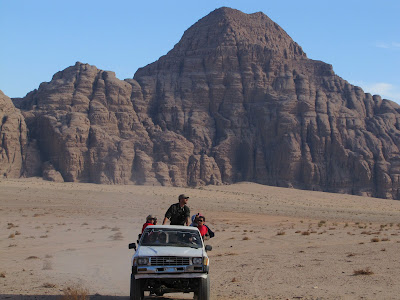 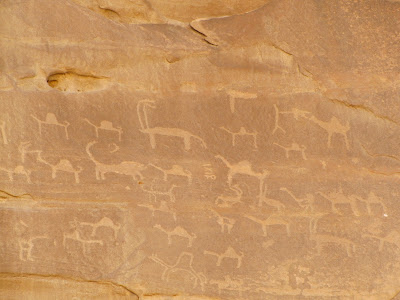 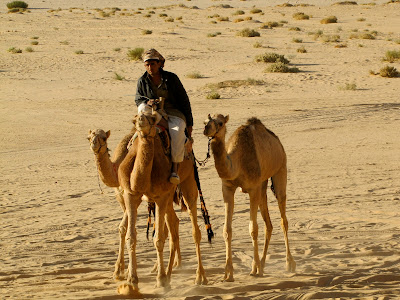 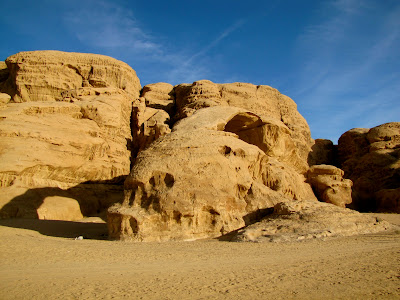 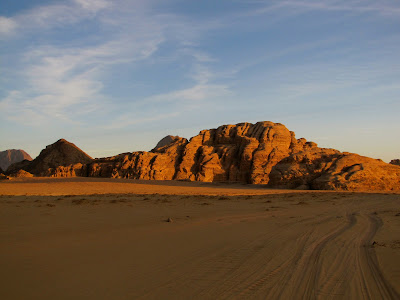 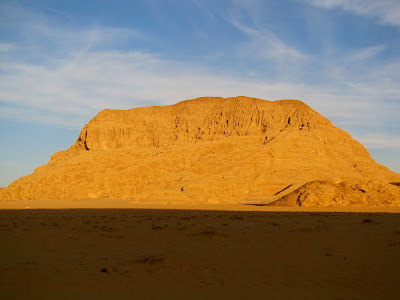 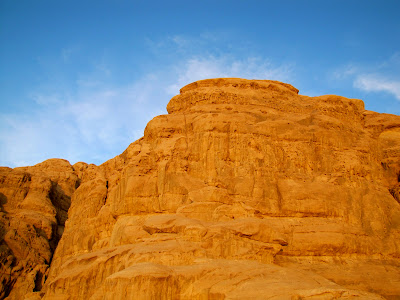 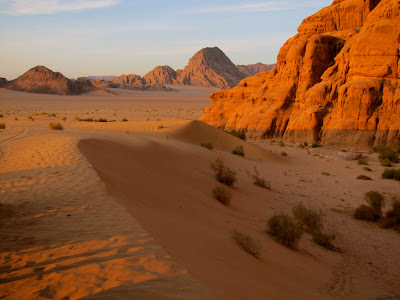 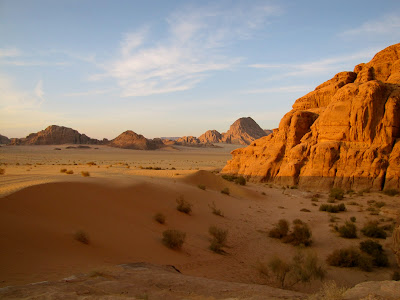 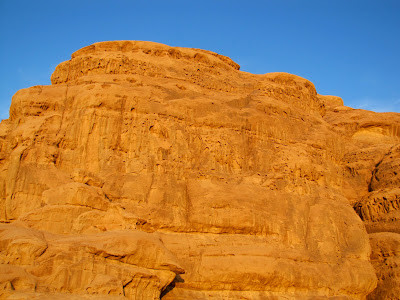 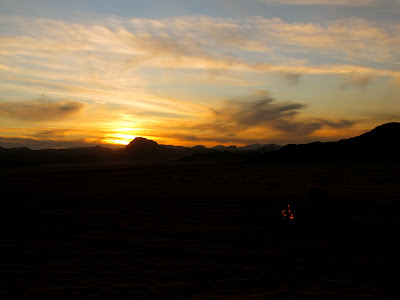 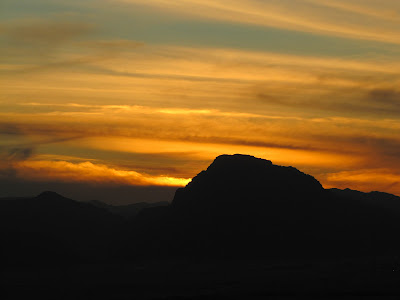 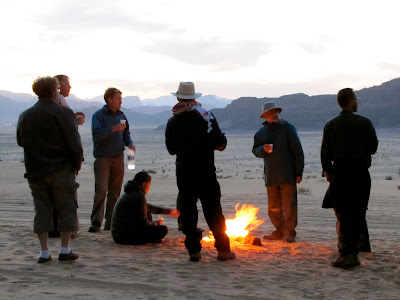 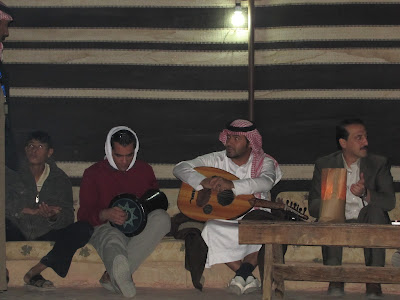 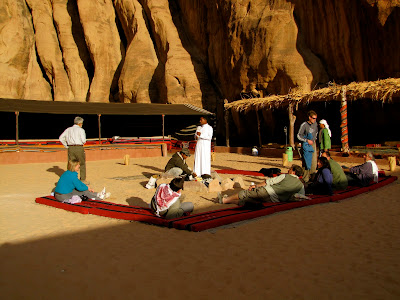 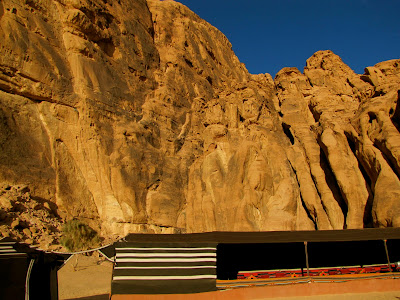 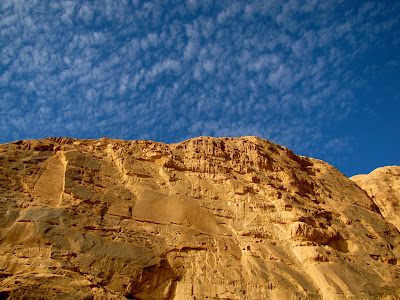 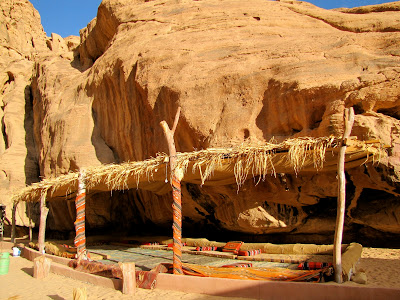 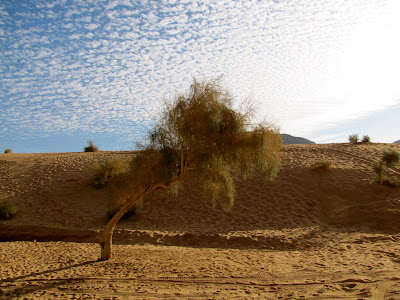 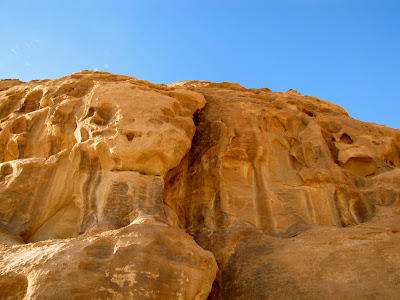 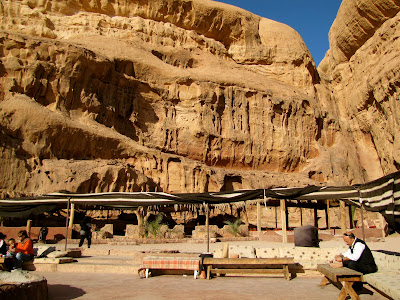 Your pictures are amazing! We never got to Wadi Rum due to timing, but now I know we have to go back again to include this stop. The glow on the rocks from sunrise and the blue, blue sky are so incredible!! When I saw your photo with everyone's arms up in the air, I thought for sure the next was and "m" then a "c" and last an "a". :)

See, now I don't have to do a think for next weeks FS-BRU topic but link back here. ;) The blue blue unreal amazing blue of Jordan's sky is one of my favorite things about this post and you've captured it so well!

These are awesome photos! AND you stayed at the Al Harbi's camp! We used to do overnights there with a biking club we belonged to.. You have a picture of their long-time evening entertainment. I remember the singing Oud player always covering Mohammed Abdo and having the most gorgeous Bedouin eyes, no? :D